It’s 10.30pm on a Thursday and Alberto Guerrini, aka Gabber Eleganza, is manning the turntables at Berghain’s Säule room. Smaller than the club’s more famous main hall and Panorama Bar upstairs, the ground floor space holds about 300 people, its huge, pock-marked concrete columns and exposed piping lend it a bunker-like feel. Combined with sweeping red lights, and the stabby bass, haunting screams and sibilant hisses of Novelist & Mumdance’s classic ‘1 Sec’, it feels eerie: a huddle of ravers gathered in an industrial furnace.

Granted, you probably wouldn’t expect someone with a name like Gabber Eleganza to be playing grime/dubstep crossovers. Nor the tunes that follow over the next couple of hours: the throbbing dancehall pulse of DMX Krew’s ‘Ragga Clash’, the euphoric trance of Blastto’s ‘OTM’, the proto-rave of Ragga Twins’ ‘Hooligan 69’, even an a capella of Baby D’s ‘Let Me Be Your Fantasy’.

“Some promoters get scared because I have ‘gabber’ in my name,” Alberto smiles later. “But I like to bring unexpected things, which usually means a lot of post-rave stuff. The name was always intended to be playful, and I’ve always liked to play what the fuck I want.”

Despite the inherent irony of the name – gabber is surely the opposite of elegant – there is nothing satirical or humorous about Alberto’s intentions. His Gabber Eleganza alter ego officially began when he started to share images – flyers, photos, posters – covering the European hardcore and gabber scenes he loved on a Tumblr of the same name in 2011. Though filtered through his own personal choices, rather than aiming to be anything official or completist, visitors could get an overview of the scene, even if they were too young to remember it, or had never experienced it.

His connection with the music, also sincere, began much earlier, in the 1990s. Born in ’85 in the town of Bergamo, 30 miles or so from Milan, Alberto describes his upbringing as “classically working class… my father was a baker and my mother was a secretary for a while before helping in my dad’s little corner bakery. There wasn’t much to do growing up. My first musical experience as a teen was at our local youth centre, which was connected with the church, but was a place where we could hang out, listen to music, smoke joints.

“That was the moment I discovered music outside of the home environment, but a bigger turning point happened when the Luna Park came to town – a huge amusement fair that visits every Italian city on its respective Saint’s Day. The one in Bergamo had a huge, Jamaican-style sound system – a real wall of sound – and it was playing hardcore. People were going crazy, dancing and jumping around, which for me it was completely alien. I found it both charming and disturbing. I bought a rave tape from a local market that had Dutch and Italian hardcore tunes on it soon afterwards, and then started going to some of the nightclubs in my area.” 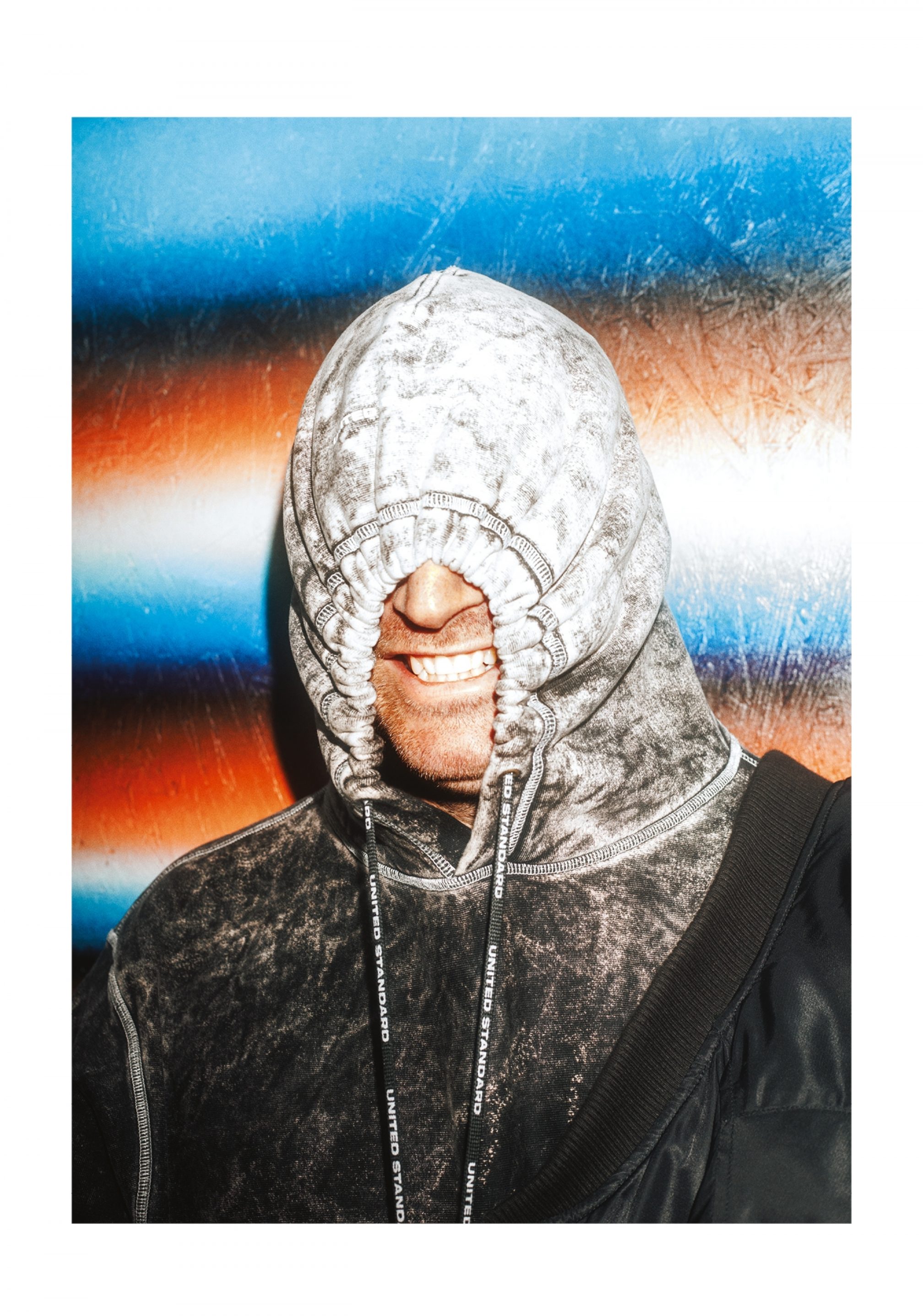 Bergamo lies on the A4 motorway that snakes east-west across the industrialised north of Italy, connecting Milan, Turin, Venice and Trieste. It sprouted some nightclubs, including the 5,000-capacity Number One Hardcore, which still hosts big rave parties today.

“We used to go there on our scooters, about 25 of us in tracksuits and no helmets,” laughs Alberto. “In the 90s everyone I knew was either a raver or a metal-head. We were all working class; some kids even had full-time jobs on building sites by the age of fifteen. The moshpits at Number One were like something from the punk era, but the fashion was very nineties with lots of fluoro. It felt good to suddenly be part of something, part of a tribe. When I couldn’t make the parties, I would listen in my bedroom on my Walkman to the live recordings, while my sister slept in the same room. When I hear the music even now I feel the same… a mix of dreamy, but also very physical.”

As Alberto progressed through his teens and attended university, his musical tastes opened up, but the hardcore scene kept growing, exploding in North Italy around 2000. By then he had realised that hardcore was not just a trend but a subculture that extended beyond Northern Italy, Holland and the Benelux countries, and connected with scenes elsewhere, such as in the UK.

Read this next: 20 gabber rave photos that will make you want to party like it's 1999 BPM

“In 2005 I saw Chris Cunningham and Aphex Twin and it blew my mind,” he says. “This was a whole new form of music to me, this intelligent breakbeat version of hardcore. More avant-garde in terms of its production, but still connected in spirit. I became even more interested in the subcultural side, and started to explore it on the Internet. I noticed there were a lot of misconceptions about the music and the scene – stereotypes of sweating white men pulling funny faces, or connections to right-wing or fascist culture, which of course it had, but isn’t what it was about. It frustrated me, and at the same time I noticed there was a lot of writing but not so much of the scene’s visual realm online. I had always been interested in graphics, fanzines, posters, merchandise, and the whole DIY aesthetic, and that’s how the blog began.”

In more recent years, Alberto’s focus has expanded quite dramatically into book projects, a record, publishing and merch label (NeverSleep), a live show (Hakke Show), and – as we see at Berghain – a DJ career that still commits to hardcore events but spills effortlessly into post-rave territory. It’s all developed organically from his deepening and broadening connection to the culture. 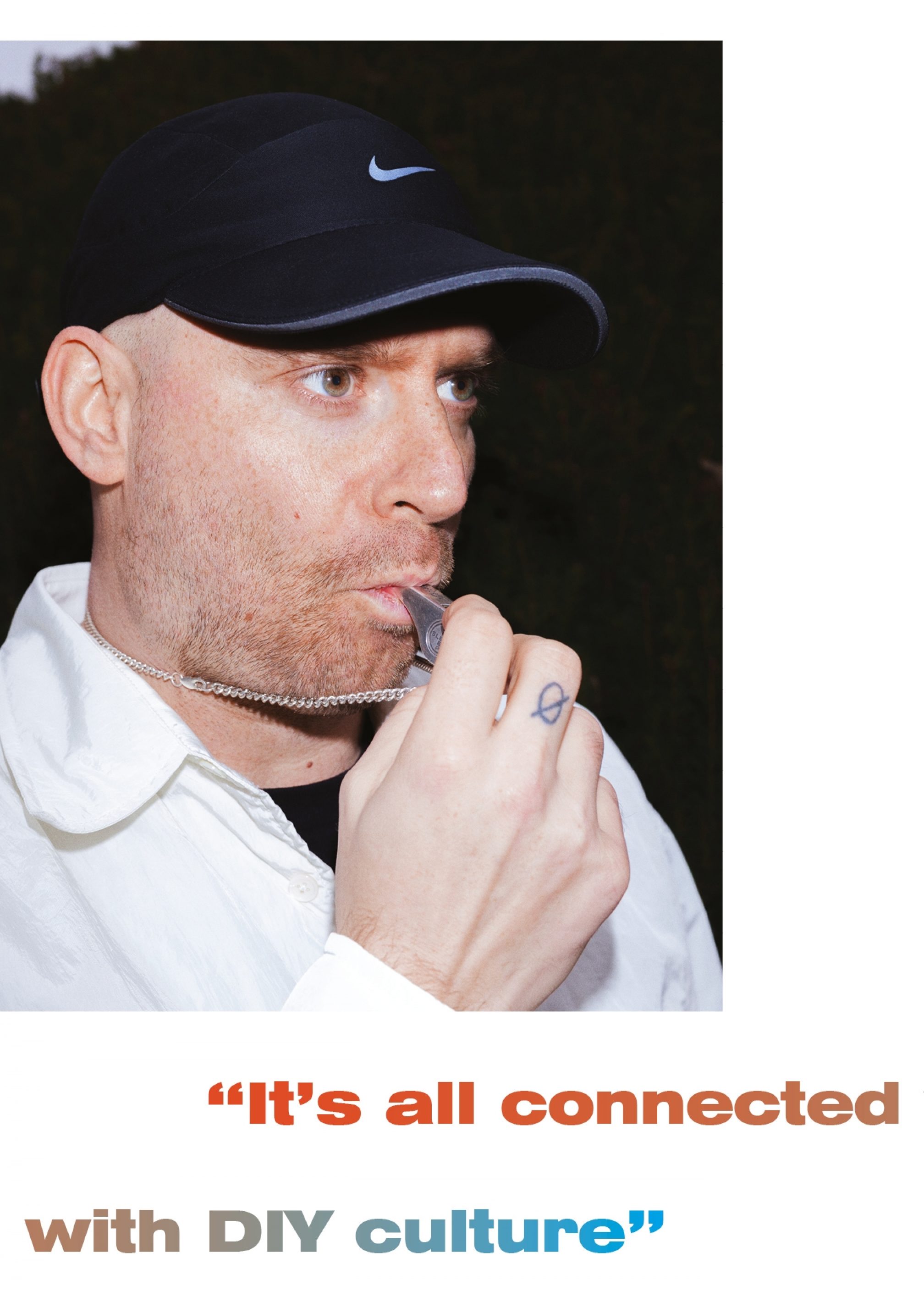 One of the first major departures from his online project was an invite in 2016 to a music event at Milan’s Pirelli HangarBicocca, a major art gallery housed in a former train component factory. Organised by Presto!? head honcho Lorenzo Senni and German artist Carsten Höller, the idea was to combine performances on European and African stages, a sociological angle that delivered the prompt Alberto needed.

“I was a DJ from the age of 16, the same age I bought my first vinyl record. I played at raves in Milan, and I also made music back then, but always as a hobby. I never wanted to do it as a career – not least because Italy is very difficult if you don’t play straight techno and house. After the blog, people started to ask why I didn’t play as Gabber Eleganza for special events. I always said no, as I didn’t start that project to do music, so I was sort of waiting for the right chance to do something.”

Pulling in three of his oldest gabber rave friends and asking them to dance for an hour on stage, Alberto set about spinning a set of bristling, 90s-era hardcore. He called it the Hakke Show, after the dance style from Holland that means ‘to cut’, named after the way the dancers cut the air with their legs and arms. “Doing something inside a museum felt more relevant to me,” he says. “I wanted to do something outside my comfort zone, something new. Even older people there were starting to dance along. The idea is that I play for the dancers rather than for an audience. The performance creates a bridge. The dancers bring so much energy. They are completely covered in sweat by the end. It’s like a kind of updated folklore show, or an ancient mask parade, showcasing a culture that has been marginalised or forgotten by many. It’s for sure not ironic. It’s real and dirty, smelly and primitive. It also felt good to change the usual post-modern approach, which is often simply about taking things from the past and recontextualising them. This is different, as I am also a direct part of it.”

In 2018 another idea developed after he noted visual similarities between the gabber scene and the UK’s Northern Soul movement through the photographic work of Ewen Spencer, who has covered both scenes. “I began a period of research, selecting unpublished visual material relating to various different subcultures. My approach was not to focus simply on aesthetics, but on socio-anthropology. It was no longer about bringing the culture of a bygone era back to life, or reappropriating it nostalgically; instead, it was a way to catalogue idiosyncratic styles, from which something new could be born.” 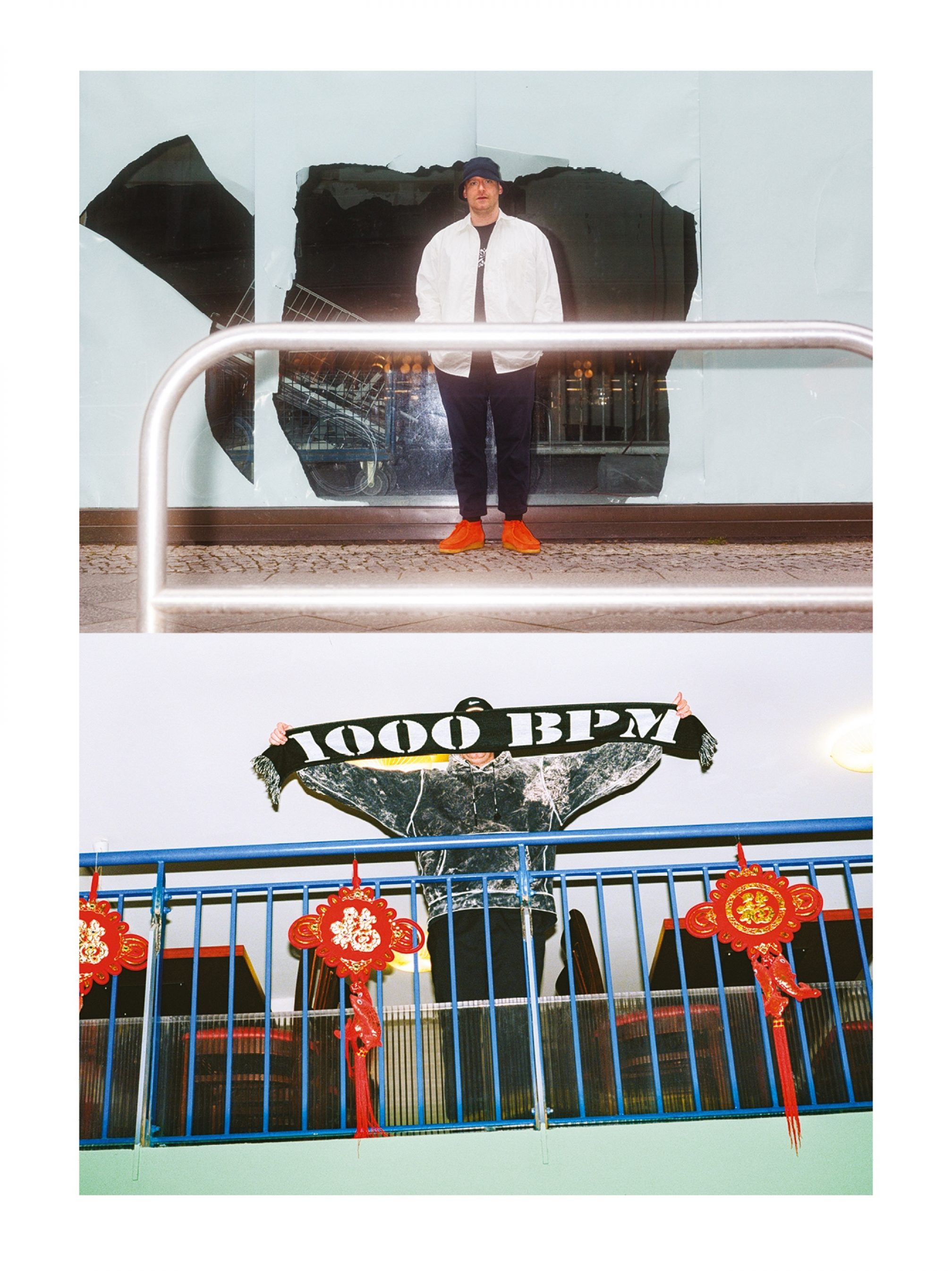 He met Spencer in 2017, spending an evening at a London pub talking about Northern Soul and hardcore gabber, each of them fascinated by their different backgrounds. The resulting book, Hardcore Soul, links these two apparently disparate scenes together via an interview with Ewen (by Turner Prize-winning artist Mark Leckey) and a sequence of images that are deliberately non-chronological, leaving the reader to sometimes wonder which image belongs to which scene or era. It sold out within a couple of weeks, and came with special ‘Hardcore Soul’ mixtape – “a never-ending euphoria journey with positive melodic stabs and infinite digital pianos.”

“The interesting thing was how both these movements were connected to outsider culture – usually the working class. It’s often like that, from the LGBT people who supported house music in Chicago to the UK rave scene. It’s all connected with DIY culture, a place where people can push everyday stress away through music. I especially love the idea that the Northern Soul scene was not for flirting but almost strictly for dancing; how graceful it was despite its working class roots, something that is also apparent in hakke.”

In 2018 Alberto moved to Berlin, more for personal than career reasons, he says, but since then he’s engaged in a flurry of activity. In the last year or so he’s presented his Hakke Show at Club2Club, Berghain, Hyperreality, Oval Space and CTM Festival. He’s also launched Never Sleep to showcase “new and old artists that symbolise not just rave and post-rave culture, but a wider DIY aesthetic“; its inaugural release was ‘Multo Crudo’ by London producer Lizzitksy. On the site are also books, fanzines, records and merch – including a handmade silver rave whistle for a whopping €1,350.

Read this next: 10 pieces of weird DJ merchandise you can currently buy

The label has releases lined up for 2020 other Violent Magic Orchestra, Ilsa Gold, Emmadj, Minimal Violence and more. Alberto will also continue with his own productions, which started last year with a debut production on Presto!?, a three-track EP that nods to the energy of his original gabber inspirations while bringing them up to date with a modern array of synths and FX. Also in the bag for 2020 is a collaborative EP with Hdmirror on Berlin label Live From Earth, a remix with Marc Acardipane and a remix for AnD on Repitch.

And his plan to promote the gabber scene (which he points out is, and always was, thriving) continues. “I’m still posting to the blog, but of course I’m much busier than before. Now it’s about taking it to a place connected to art and culture. That’s what the label represents – an organic step from the blog into a multi-platform, multimedia endeavour. The idea is to showcase old artists with reissues and remixes, as well as new artists; to symbolise the bridge between the naïve, DIY, straight-to-the-point culture of hardcore, with the more composed and artful post-rave culture that came after it.”

It’s all a long way from his one-man Tumblr, but the mission is the same: to connect past, present and future with effortless style. Elegance, even.