The political disruption that infiltrated the vibes of 2016 and energised the rebellion of 2017 is no closer to a resolution. Rather, reaching any semblance of national unity feels further away than ever. The rumblings of cultural conflict have ballooned into an all-out culture war, where fighting is no longer centred around any one issue. A deeper Us vs Them fission cuts through just about everything, even slashing through the manifold Us camps and Them camps like a late 70s horror antagonist, cutting society into ribbons that will never relink into a bow.

Even that ground zero issue of Brexit has become so obscured by confusion and fatigue that it’s lost some of its potency as a focal point. Can it be stopped? Will a civil war kick off if it is? Are there any possible pros? Who knows. But what has become abundantly clear in recent months is there is one person whose self-serving plan is coming up roses from the shitstorm he’s detonated. Boris Johnson, essentially a poster boy for the insatiable thirst for power an Etonian-Oxbridge education instils into its students, was a driving force of the Vote Leave campaign. He now looks set to take office at 10 Downing Street, climbing the ladder of chaos like Littlefinger, but even more skin-crawling. So for 2019, Glastonbury combined its ‘16 distress, ‘17 defiance and 2019 present tense angst and took aim at a key figure primarily responsible for, and currently benefiting from. this mess. The message was clear: Fuck Boris.

It rang out across the two the two biggest stages. Around 100,000 people screamed the “Fuck Boris” bar of Stormzy’s ‘Vossi Bop’ during the rapper’s instant classic Pyramid headline slot (leading to Johnson laughably claiming they said "Back Boris"). As if there was any doubt, a reload was sparked and the message screamed out again in even bigger voice moments later.

Over on the Other stage, Loyle Carner dialled his approach down to be slightly more palatable for the pre-watershed TV audience, donning an ‘I Hate Boris’ tee. But even the Polite Rap star couldn’t resist a quick “Fuck that guy, man”. The BBC’s impartiality stance was taking a beating. 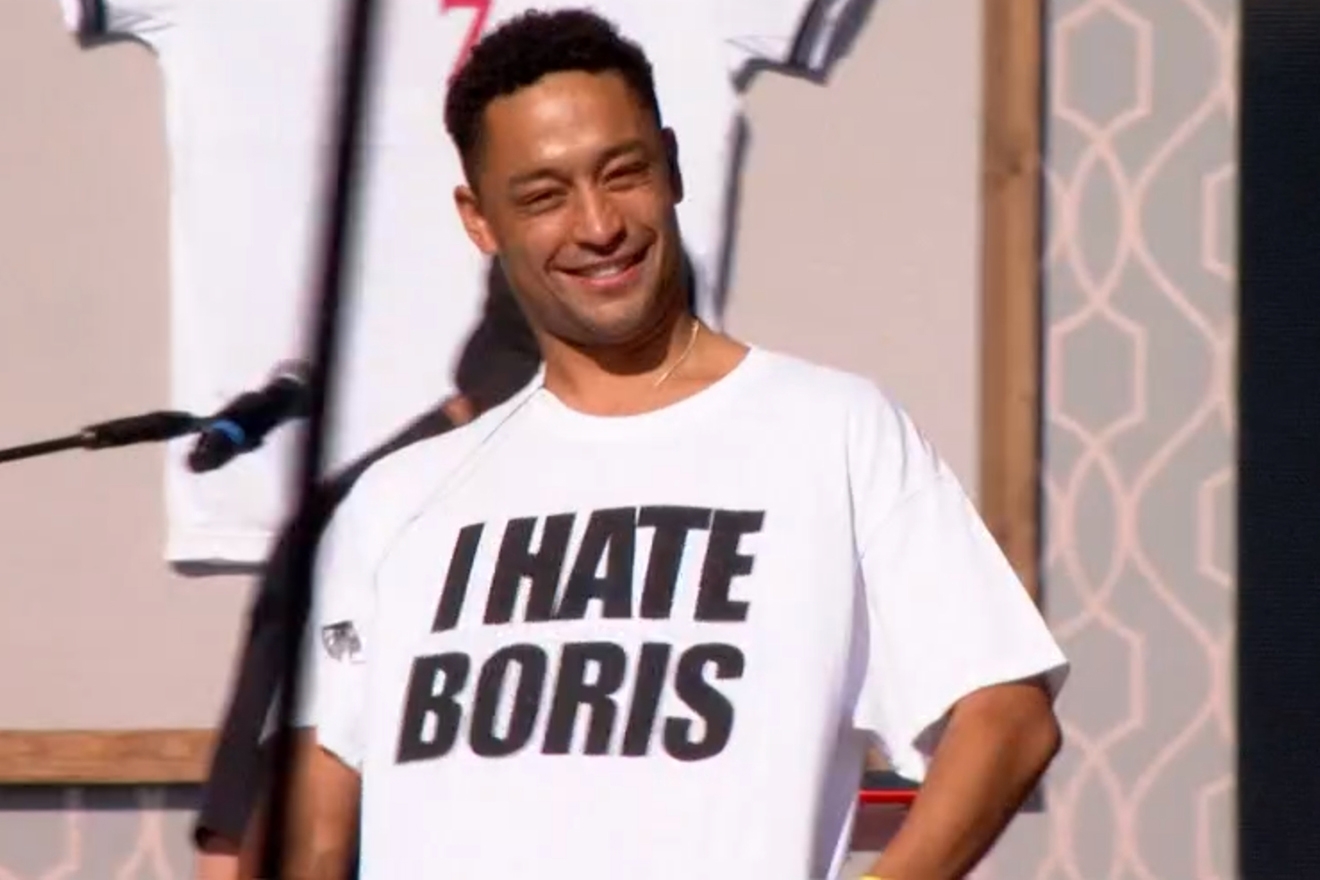 But away from the cameras, the main stages and the stars, the “Fuck Boris” message was most potent at Jonny Banger’s Stonebridge Bar Mega Rave. In the run-up to the festival the designer put out a limited run of t-shirts emblazoned with “Fuck Boris” on the back and “Mega Rave” on the front, with the online listing citing “Boris Johnson's long record of sexist, homophobic and racist comments”. Tees sold out at £15 a pop, but were not representative of opportunism or the naked capitalism of the figure they’re deriding: all money was promised to a good cause, and at Glastonbury 300 were launched out for free to a clamouring crowd. Banger told the Guardian he’s never considered his wares as political, but was pushed over the edge by the “vile” Johnson and “wanted to use the T-shirts to say something”.

There were no grand political statements at the rave. Banger’s mic chat was the kind of delirious rabble-raising nonsense that makes perfect sense in a rave setting. But a message was conveyed. A DJ line-up of Harrimann, Jenny Cheng, Klose One and Artwork rotated on deck, all wearing the “MEGA RAVE / FUCK BORIS” tees while unleashing piercing rave stab anthems and pacey percussive heaters. Old skool UK bangers like Bizarre Inc’s ‘Playing With Knives pumped out the system alongside Dextrous’ speed garage remix of Da Hool’s ‘Met Her At The Love Parade’. Banger and his cohorts were having it on stage, and the crowd responded in turn, many of whom were also proudly adorning the slogan tees. Rave, UKG: it was a celebratory reminder there are still things this country can be proud of. And in that message was the inextricable announcement: we know what’s good, and it isn’t Boris Johnson. The front-and-back designed tees embodied the pervading mood: MEGA RAVE close to our hearts, backs turned on Boris.

God Save Our Gracious Scene: Music is the UK's lasting point of pride
The Chemical Brothers saluted Keith Flint by lighting up Glastonbury
Was 2019 the most environmentally friendly Glastonbury ever?