Dance music is now an established staple of Glastonbury festival, with the likes of block9, Arcadia, Silver Hayes and The Glade hosting world class electronic-focused line-ups each year. But it hasn’t always been that way. Back in 1997 - a full decade before dance hubs like block9’s NYC downlow and Arcadia’s Afterburner debuted at the event - The Prodigy paved the way, becoming the first ever dance act to headline the legendary Pyramid stage.

As with all Prodigy performances, it was a blistering showcase of raucous rave energy, with Keith Flint front and centre of the chaos. A whirlwind blur of spiked hair and wild eyes as he prowled the stage like a demon, only breaking from loudly shouting his bars to swing the microphone into the ground to produce almighty thuds. The Egyptian sun god Ra couldn’t hold a torch to the fire Flint brought to the great Pyramid.

22 years later and the group hadn’t lost a degree of their potency on the live stage, still standing as the most explosive live act in electronic music. They were booked to play the 2019 event, and no doubt would have shaken the ground of Worthy Farm if the tragic death of Keith Flint hadn’t brought a halt to Prodigy activity. Their legacy will live long in the memory.

The Chemical Brothers are an act who have followed in The Prodigy’s footsteps. They brought dance music to Glastonbury’s biggest stage, headlining the Pyramid in 2000 - more stationary as performers in the Liam Howlett role, but captivating with their big beats and laser sharp visuals. It marked the dawn of a new Millenium for both the Gregorian calendar and for Glastonbury. In the following decade the South East Corner would be established as the late-night magnet for kick drum seeking nighthawks.

But when it comes to Glastonbury’s biggest stages, only a handful of artists are entrusted to top the bill. It’s become a tradition for an electronic act to headline the Other stage each year, and The Chemical Brothers have essentially turned the slot into a semi-residency, with 2019 marking the duo’s fourth time since 2007. With The Prodigy originally scheduled to play this year's festival, The Chems’ role of flying the flag for high profile dance acts felt extra pronounced. They did the scene, and The Prodigy, proud.

On Saturday night they announced their opening with atmospheric vocal resonance softly ebbing into the palpitating tones of ‘Go’ as purple humanoid shaped light beams charged towards the crowd on the screens behind. As soon as the strummed bass tones and drum beats dropped in a party atmosphere erupted amid the thousands-strong crowd and didn’t let up across the full 90 minute set. 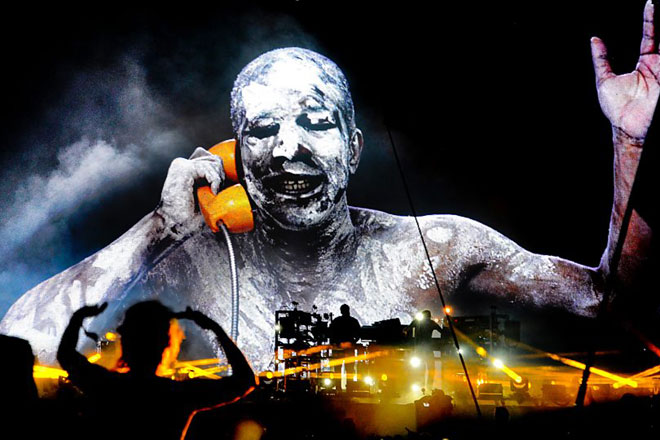 The backdrop synced up perfectly with the exhilarating beats to enhance the heady rave atmosphere. Visuals have been a consistently exceptional aspect of The Chemical Brothers’ live sets, and a mix of old and new were on display. Staples like the bursting paint balls for ‘Saturate’, the white paint-smeared, orange phone brandishing man delivering the tongue-twisting bars of ‘Elektrobank, and body popping neon ringed figures for ‘Hey Boy, Hey Girl’ all remained, fitting together seamlessly with new album material. Ghostly gymnasts flexed behind ‘Free Yourself’, Michelin man-esque shapes gyrated along to ‘Get To Keep On’, and the epic sci-fi feel of ‘No Geography’ was elevated by a face washed in cosmic projections speaking the stirring verse.

Ed Simons’ looked as though he was trying to pluck the stars from the sky as he held one arm aloft exultantly, and flares sparked across the crowd spewed red smoke into the air as multiple generations of firestarters watched on. The closing visuals dedicating the performance to Keith Flint couldn’t have felt more fitting. His influence is etched into Glastonbury dance history forever.

The Chemical Brothers: "Young people are having opportunities taken away. We wanted to channel that"
Rave icon: As the frontman of The Prodigy, Keith Flint delivered a furious new type of dance music
The best photos so far from Arcadia's Pangea stage at Glastonbury Glastonbury
IICON in Glastonbury's Block9 is a festival wonder up with the world's best