“I think artists are the freedom fighters of the world.” It’s a timely statement from activist, model and actress Pamela Anderson, who’s discussing why it’s so important in this period of political turmoil and despair for those with a voice to use their platform to achieve change. “There are solutions, and we need new ideas, so I’m encouraging people to behave and think differently,” she urges at the opening conference of the 15th edition of Austrian music, arts and political discourse festival Elevate, whose theme is ‘truth’.

“It’s just the topic of the time,” begins Elevate’s Roland Oreški, noting the addition of ‘post-truth’ to the Oxford dictionary. “We want to activate people and start a discussion; I think that’s happening in every part of the programme, just in different ways. We try to bring different people together: nine-year-olds to 90-year-olds hearing different ideas, whether it’s about climate change, the far right, fake news or conspiracy theories. It’s important to reach as many people as possible, because we want to have an open discussion with everyone in our society.”

Discussion topics including ‘Climate Truth/Lies’, ‘False Truths’, ‘Truth in Immersion’ and ‘Facts vs Fictions’ act as a bridge to the Graz festival’s forward-thinking music programme, which “reflects the evolution of using technology in music”. After stimulating daytime debates about controversial issues, the centuries-old Schlossberg Fortress transforms into an all-night-long rave cave hosting sonically and visually challenging performances.

“When you walk in there for the first time you think, ‘How is this possible?’ says Roland. “But when you look at the history of how it was built, you think of it differently”. With an extensive system of tunnels created during the Second World War to protect the civilian population from aerial bombing, there’s an eerie feeling as Mixmag approaches the metal steps at the graffiti-sprayed entrance. Listed in the Guinness Book of Records as the strongest fortification of all time, the towering scale of the fortress – which now houses three unique music spaces – is intimidating. As haunting choral music from Jeremy Carne’s liquid-like video installation ‘Human Nature’ beckons us into the caves, there’s a sense of nervousness. Are we stepping into scene from a horror movie? 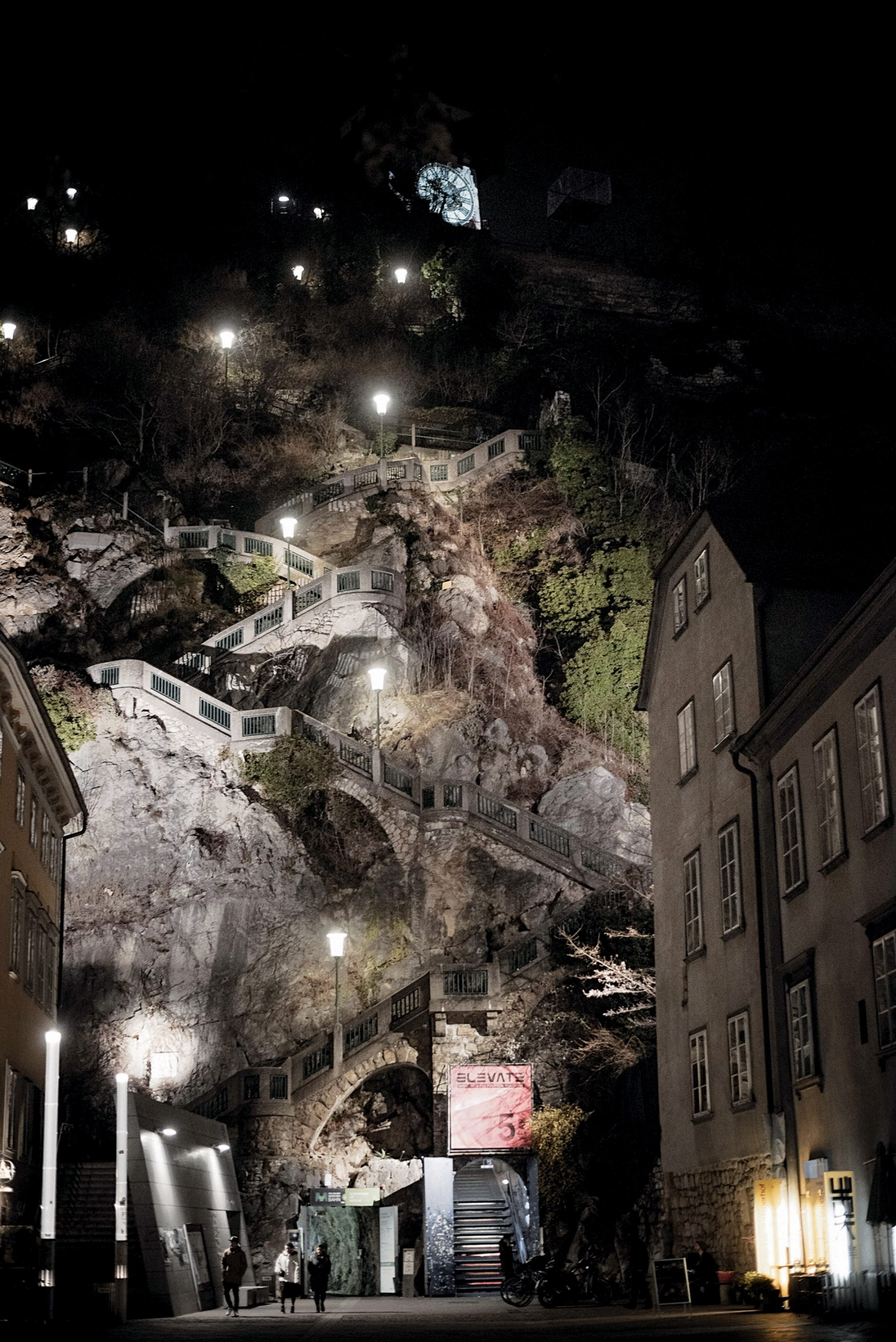 Only accessible via a glass elevator that ascends 437 metres towards the medieval clock tower sits the Dungeon. Carved out of rock and once the sleeping quarters for prisoners, the intimate chamber has a gothic feel: a fitting location for viola player and electronic adventurer Astrid Sonne, whose haunting strings on ‘Alta’ bring the cave to pin-drop silence.

That idea of futurism is something that South African musician and performer Manthe Ribane exudes too: looking as if she’s been beamed in from a far-away planet light years ahead of ours, her robotic dance moves, Auto-tuned vocal and striking fashion (floral headpiece, sunglasses indoors and regal white ruffle dress) land somewhere between Grace Jones and M.I.A., all set to DJ Okzharp’s gqom-inspired beats. More challenging but no less impressive is Nazar, whose deconstructed kuduro beats, nature sounds and chopped up vocals sound unlike anything else. 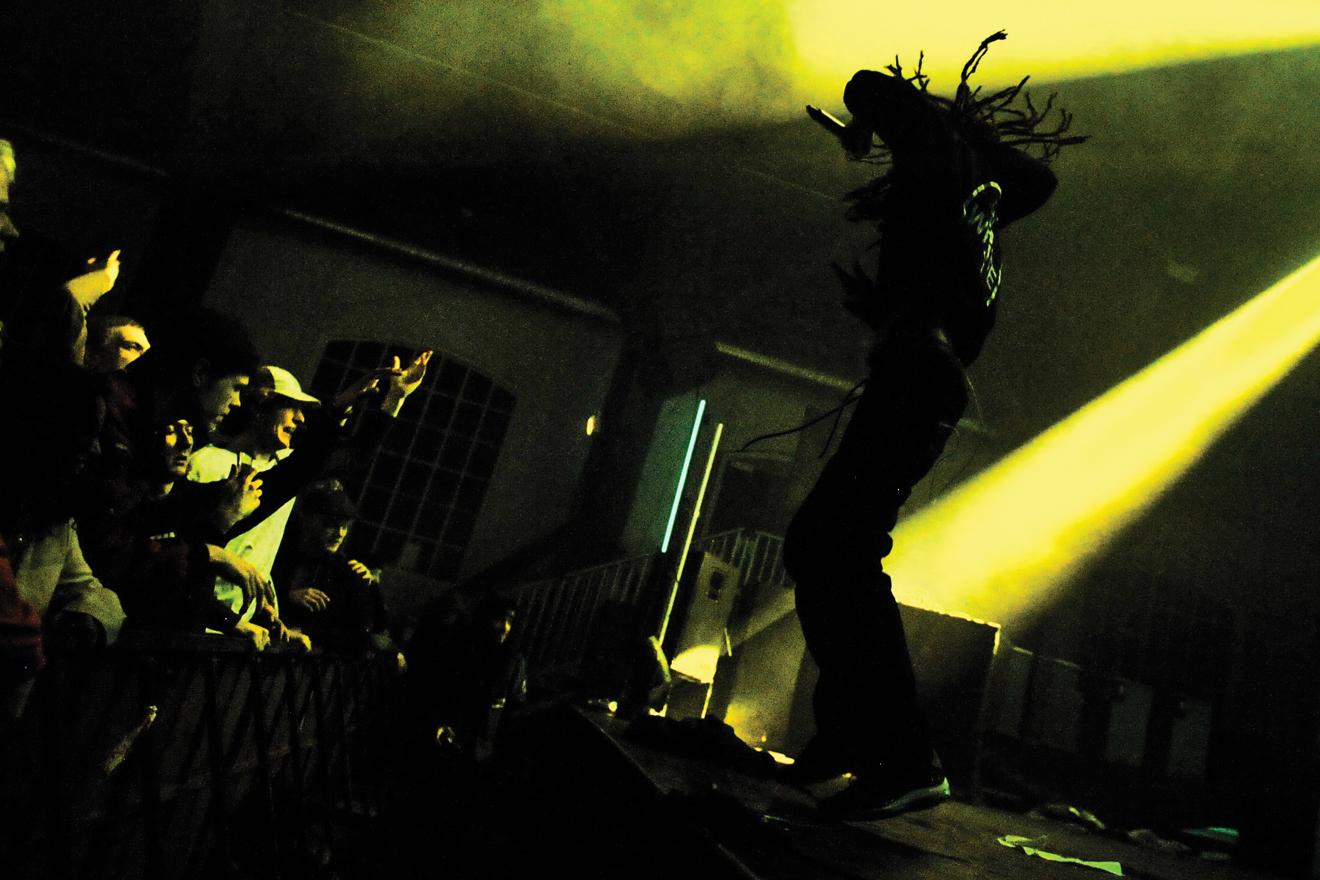 The space swells to capacity for The Bug’s onslaught of hammering basslines as Israeli dancehall MC Miss Red takes on a Mad Max-style warrior persona, climbing the decks in a black corset and cargo trousers. Looming over the captivated audience, she gets in their faces, twerking and jumping onto the stone floor. Everything is turned up to ear-shattering levels – especially for an incendiary rendition of ‘One Shot Killer’.

Despite the serious topics under discussion, a carefree, hedonistic energy is indicative of the Elevate crowd as a whole; typically dressed all in black with nose rings, beer and cigarette in each hand de rigeur, they’re not afraid to let loose. Strangers become friends while sitting on the staircase; Sarah, who Mixmag meets, says that “Elevate is the place to go for underground music; there isn’t really a festival like it in Austria.” Clare, who has travelled from Chicago, bought her ticket six months ago: “It was a no-brainer: art, politics and music are three of my favourite things.”

What’s most important for Roland and the Elevate team is that the audience is really ‘there’ – “that they are connected”, he says. Political discourse is something that more and more festivals are getting increasingly involved in – perhaps because debate and rethinking society are integral to everyday life in 2019. “I think a lot of festival makers, especially in Europe, are thinking about where things are going – and not just in terms of music any more; politically and societally, too. They are seeing it as something that they need to do, because people are starting to raise their voices.”