Long before Game Over boss Dave Browning started promoting legendary techno parties for Carl Cox at Space Ibiza, he was busy making a name for himself as the rave scene's most obsessive vinyl hustler. In 1977, by the age of 15, Dave was already scouring junk shops looking for rare soul, funk and disco cuts, as well as promoting small dance parties around his local area.

When he turned 18, Dave moved to London. Without a settled job, but still hustling records, he started selling the vinyl he found in second-hand record shops at Portobello Road market. Before long he'd built up a circle of regular clients and was starting to purchase stock from US record dealers based in Chicago. When a friend of his suggested they trip across the Atlantic to source those rare vinyl cuts for themselves, Dave replied, "Sure, fuck it, why not." It was 1983. He was 21 and had nothing to lose.

Below is Dave's story in vinyl: how he became a rampant collector, the lengths he took to get the rarest records and how, with more than 10,000 records, he has one of the biggest collections in Ibiza, where he promotes parties, most notably One Night Stand with Carl Cox and WILDCHILD at Heart. 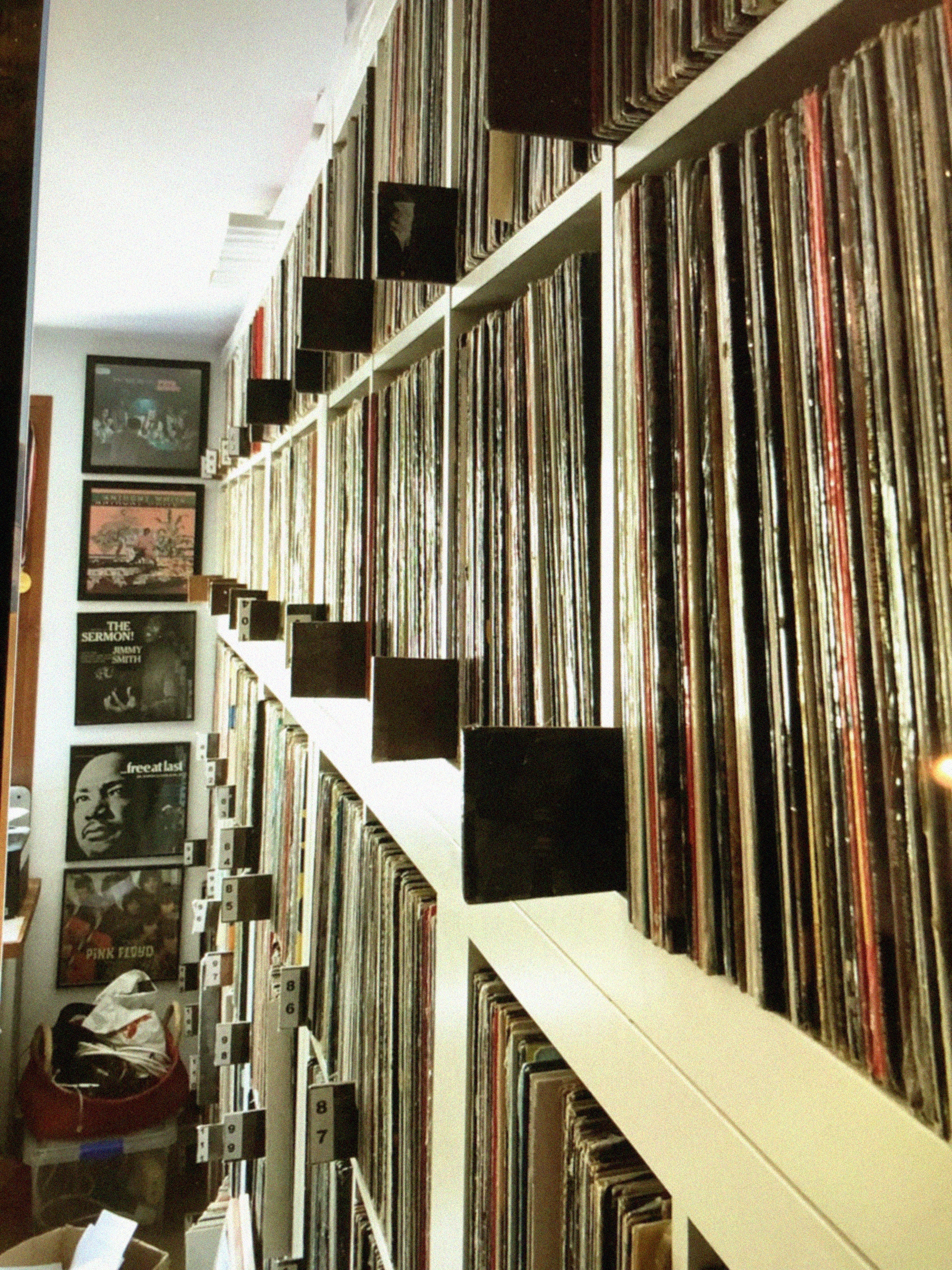 What happened when you landed in the US?

Before we left we sold everything we had so we could afford to buy flights to New York. There were also six internal flights included as part of the package. We did a little research and found out there was a wholesaler in Indianapolis and another in San Luis Obispo on the west coast. But we didn’t have a clue what we were going to find. Would we find 50 records or 50,000? The first thing we realised when we landed was that not many people were doing what we were doing.

Where did you go after New York?

We flew to San Francisco. We were advised to head over to Haight-Ashbury. I remember walking into the first record shop we visited and realising, once again, that no one from the UK had been there either.

What did you find there?

A goldmine. For people like us who were used to scrubbing around gloomy record shops, these warehouses were crazy. On that first trip we found at least 3000 amazing records and spent all the money we had. There was one album by Sylvia Striplin that was really in demand. I'd never even seen a good copy, but we found a whole box. When we got back to London people were literally fighting to get hold of it. We were buying copies for a dollar and selling them on for £50.

How long did you hang in London before flying back to the US?

It got to the stage where I would come back to the UK for two or three weeks, then fly over to the US again. I'd stick a pin in the map and say, 'right, let's fly to Dallas.' Then when I got there I'd rent a car and drive to the nearest town. After that it was a case of finding a phone box and opening up the yellow pages. If the record shop page was still in one piece I would tear it out; if it wasn't I knew another dealer had been there before me and I'd drive on to the next town. 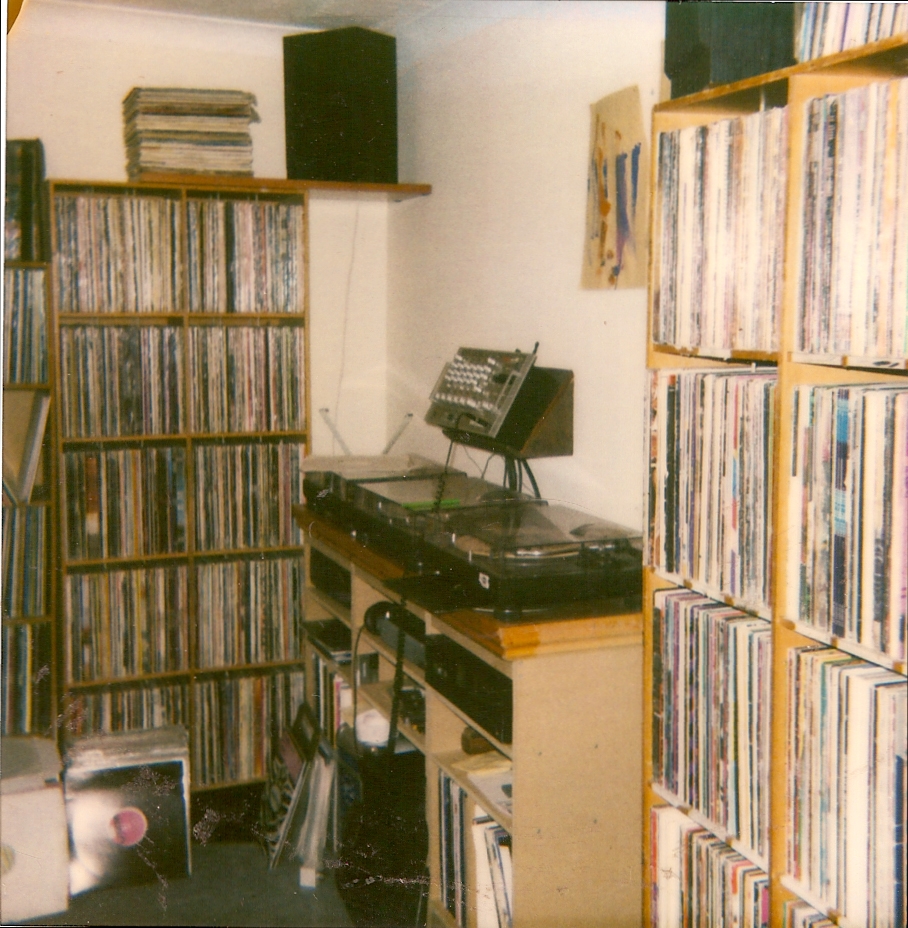 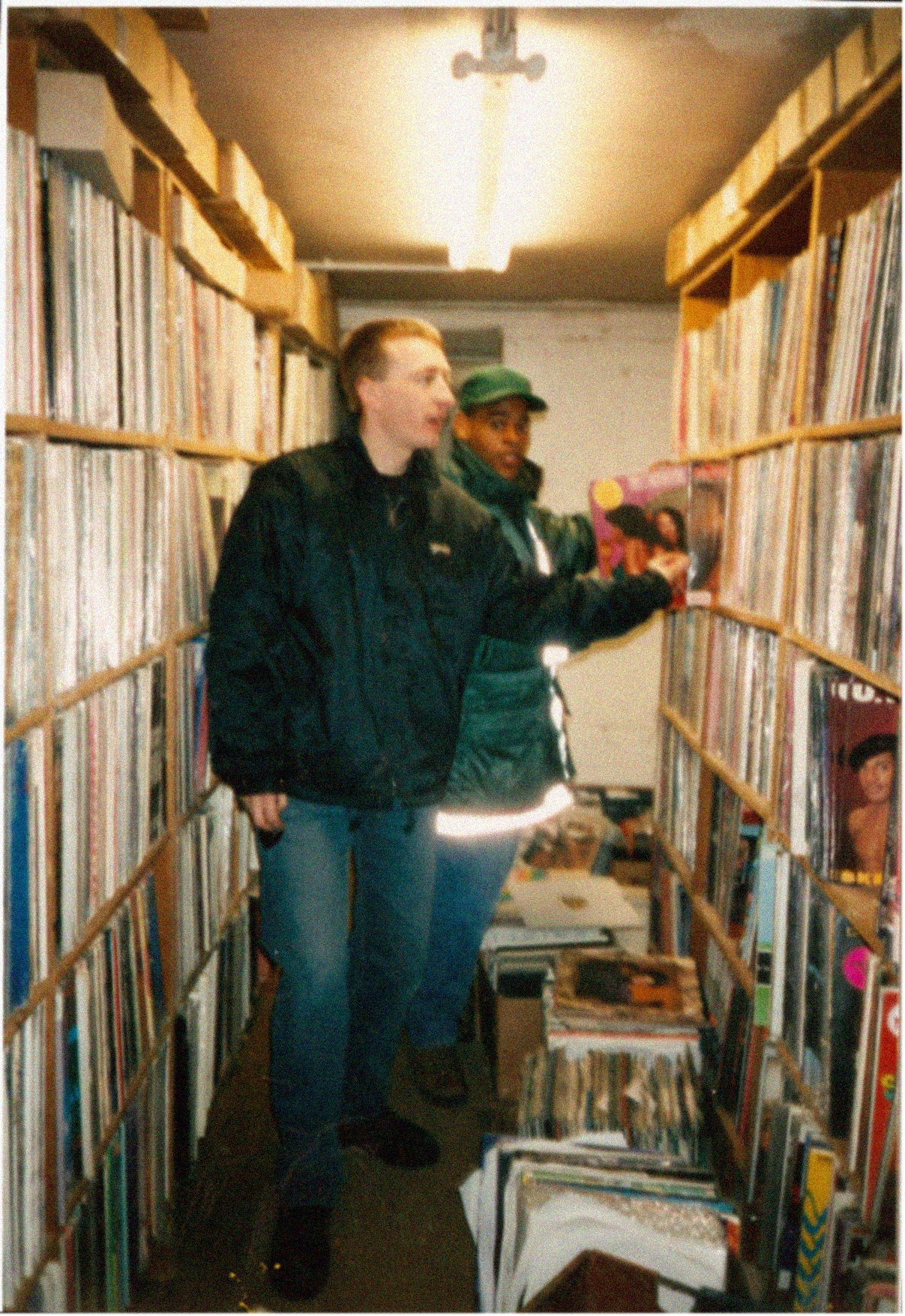 Were many vinyl hustlers working the circuit in the mid-80s?

At the time there probably 10 groups from the UK who were doing a similar thing to me. The northern soul guys were the first ones to do it. But we were the first to be going after albums. We probably missed loads of rare rock stuff, but I didn’t know anything about it. So all those great psychedelic rock records would have been left for someone else.

It was incredibly exciting; there was so much rare music around. Back then, every decent-sized town in the US had a record shop. And over a six or seven year period I visited every town in the US with a population over 10,000 people.

Why were so many great records gathering dust?

The US is such a massive country that the record companies were pressing huge quantities of vinyl in the hope they scored a hit. But in many cases those records bombed. Even if your track was plugged in Memphis it didn't necessarily mean you'd have a radio hit in New York. So these massive warehouses containing cut out records sprang up selling deletions. Even though these records hadn’t been hits, there was still a huge demand for them back in the UK.

How did you sell those records when you got back to the UK?

The vinyl we shipped back sold ridiculously quickly. I even started a specialist record fair upstairs in a huge pub in Hammersmith. Record dealers came from all over the country to rent stalls. We had a table that ran for 15 metres, holding boxes of crazy rare and in demand deleted records – a lot of them on major labels that were still sealed and had never been played. I used to have this big security guard on the door with a Rottweiler because it was always fucking carnage in there in the most brilliant way. People were going mad for this music. The press coined the scene as 'rare groove'. At the time, Norman Jay and guys like Trevor Nelson were right at the forefront and Soul II Soul and Coldcut Sound System were breaking obscure records all over the place.

What was your greatest ever find?

It was a shop and warehouse in Albany, upstate New York. I knew it was special as soon as I walked in. They had a long wall of mint condition, factory fresh records, plus a load more in the back. An old dexion rack had fallen over and I could just see this record spine - and I knew it was 'Doing It To Death' by The JB's, James Brown's backing band. The album was pretty rare, especially in mint condition. And laying there on the floor beneath this fallen rack was a box of 25 factory fresh copies. Around the corner from the storeroom there was another warehouse piled high with unopened boxes. I couldn’t believe my eyes. There was another record by James Brown called 'The Payback'. It was a double album and there were boxes and boxes of it - fifty copies per box. That night I couldn't sleep. We'd found a lot of really good places, but this was just ridiculous. On and off I spent the next five years visiting there on every trip! 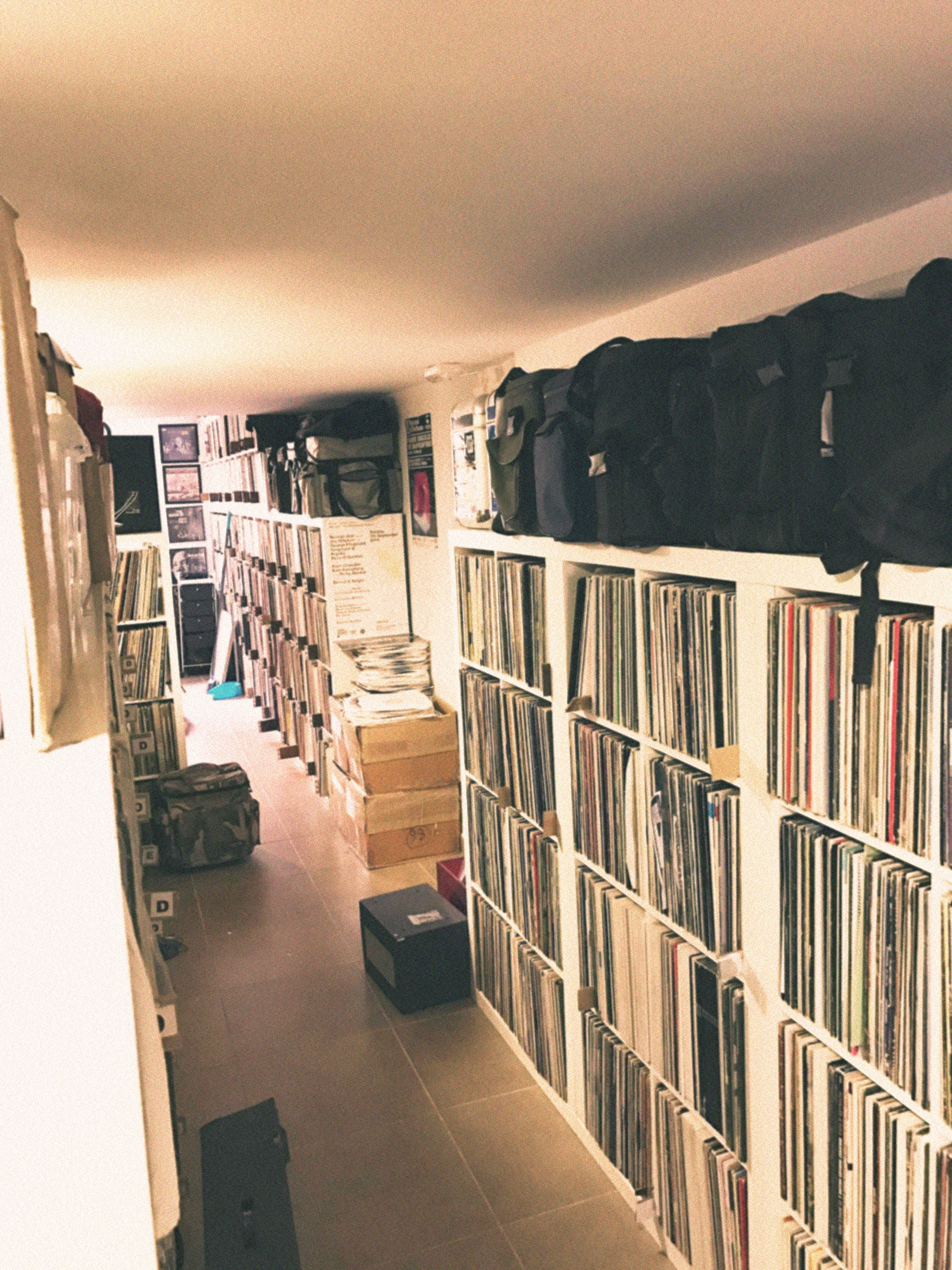 How did house and techno affect your hustling?

Labels like DJ International were shipping a lot of records back to the UK in those days, so we were looking for more obscure cuts which might be interesting to DJs in London. If you asked for techno in Chicago, forget it. You might find a little bit of house music in Detroit, but not much. In other parts of the US it was as if house and techno didn’t even exist.

Are you still collecting vinyl today?

I have around 10,000 records here in Ibiza. Soul albums, house, techno, disco, all sorts of shit. I still sell records, the problem is that I'm buying more than I'm selling! I should really be getting rid of vinyl, but if I go past anywhere with records I feel compelled to go in. It's an illness! I just love looking through records.

How did you feel when the digital boom kicked in?

I was laughing really. People were getting rid of their entire record collections and I was buying it up! When CDs came out everyone was eulogising over this incredible new format. According to the mainstream media CDs could never be damaged and they were going to revolutionise everything. So everyone go rid of their records and a couple of plays later those CDs were jumping all over the place. In my mind the sound was also a lot harsher.

Are there any records in your collection that Mixmag reader should pay special attention to?

Fingers Inc, 'Another Side' is a classic house music album. I got really lucky and bought 400 copies for 50p each. It's an amazing album, but at the time not many people wanted it, even though the track 'Can You Feel' became a classic. Now the original sells for at least £70. It's an album you can listen to at home or on the dancefloor. Either way you'll get something out of it.

I've also heard 'Ultra Flava' by Heller & Farley Project playing in Ibiza this summer. It's got a nice little drop. In 2019, the drop is so important. The drop is the camera moment, the Instagram moment everyone is waiting for.

And then there's this - 'Keep On Dancing' by Clay Acox. It's a more recent track; probably 10 years old. It's one of those tracks that seems to have slipped by without anyone noticing it. I'm pretty sure I've never heard anyone play it in Ibiza. Or anywhere for that matter. In my opinion it's an incredible tune.