This year’s unofficial Rio Carnival hit came from an unlikely source: MC Loma, a 15-year-old girl from a peripheral neighbourhood of Recife, the regional capital of Pernambuco. For many Brazilians ‘Envolvimento’ was their introduction to an exciting new sound, featuring the trademark heavy bass and offbeat rhythm of brega funk, a style of dance music from Recife’s comunidades or periferia (favelas).

Recife is a tropical coastal city where the temperature rarely drops below 25 degrees and vegetation constantly threatens to reclaim the built environment. In the 1980s it was considered one of the most dangerous cities in the world; things have since improved, but it remains severely underdeveloped in parts. Brega funk is the perfect soundtrack to this tropical metropolis, both sexy and aggressive. The music can be heard day or night, under the scorching sun or dull yellow street lights, as women in jean shorts roll their waists by the greasy plastic tables and topless men sip ice-cold beer from plastic cups. 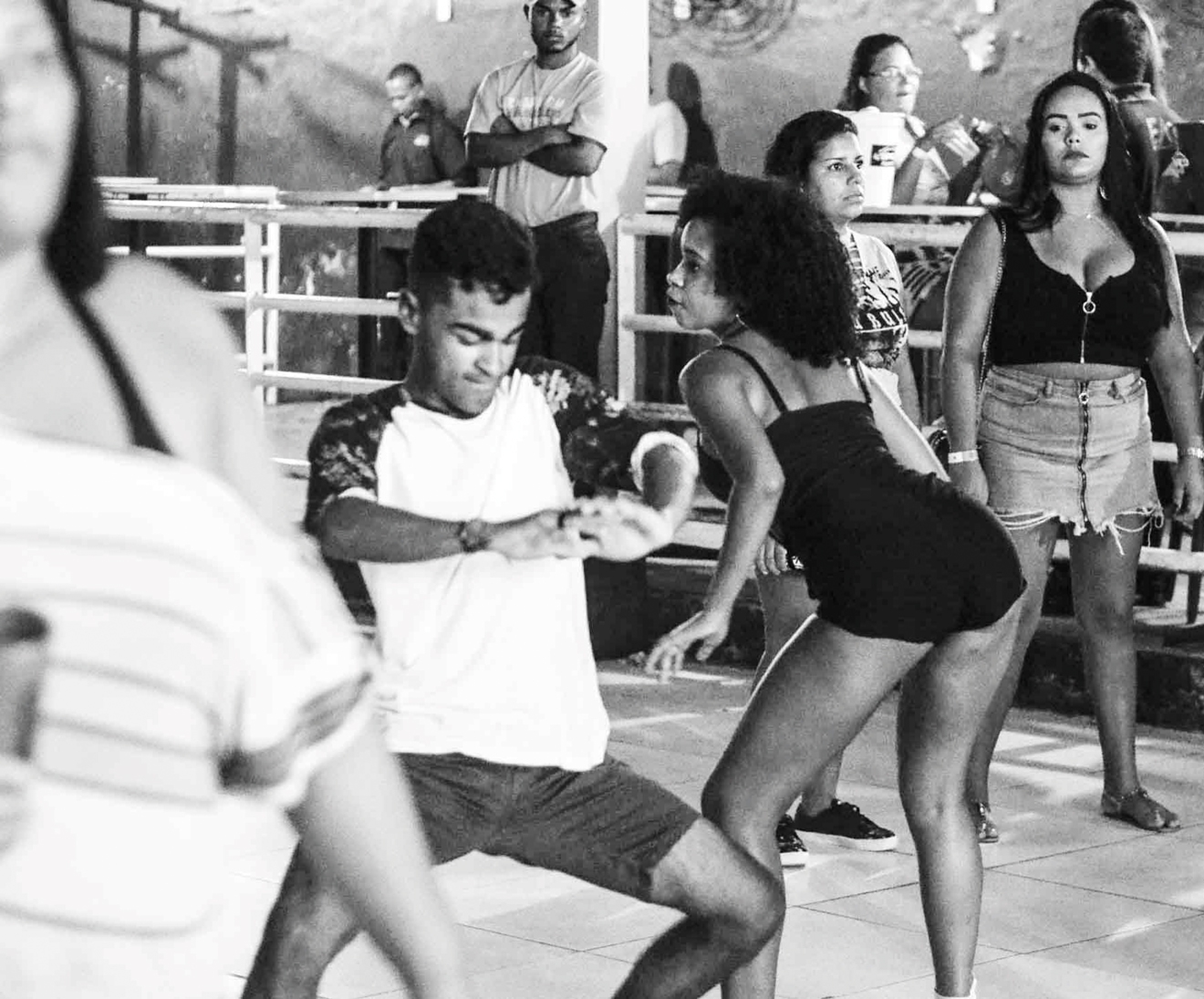 The sound began in the bailes (parties) of the poor, predominantly black and mixed-raced neighbourhoods and was initially scorned by the middle class. However, today, according to fan Adriane from Janga, a town just outside Recife, “the music is smashing prejudice about favelas and black culture”.

In the outskirts of the city, in the working-class neighbourhood of Imbirbeira, near the airport, lies one of Recife’s legendary brega funk venues, Espaço Aberto. We’re here to see pioneer MC Troia, whose 2016 track ‘Balança, Balança’ is one of the genre’s biggest hits, with over 21 million views on YouTube.

The event takes place on Sunday night, a popular time for poorer Brazilians, many of whom work a six-day week, Monday to Saturday. Espaço Aberto is a large warehouse with one side open to the elements. Apart from the stage, the space is basic: canned beer is served out of a polystyrene ice-box.

The opening act is a band playing pagode, a form of samba, while onlookers stand around sipping drinks and chatting. When the band has finished an interim DJ begins, and the sound of a popular brega funk hit bursts through the speakers. Within seconds the crowd is alive and bodies are moving. The club begins to fill up.

Later in the evening MC Troia appears on stage, screaming his notorious high-pitched catchphrase to the excited crowd: “É o Troinha caraiii!” (“It’s fucking little Troia!”). He’s accompanied by four dancers who move with incredible skill and pace. Brega has its own set of moves, and on the dancefloor, Jonathan, from the nearby comunidade of Coque, shows us some basic steps. He tells us that he grew up listening mainly to pop music, but in the last two years “brega funk has become the most popular music in the city”. 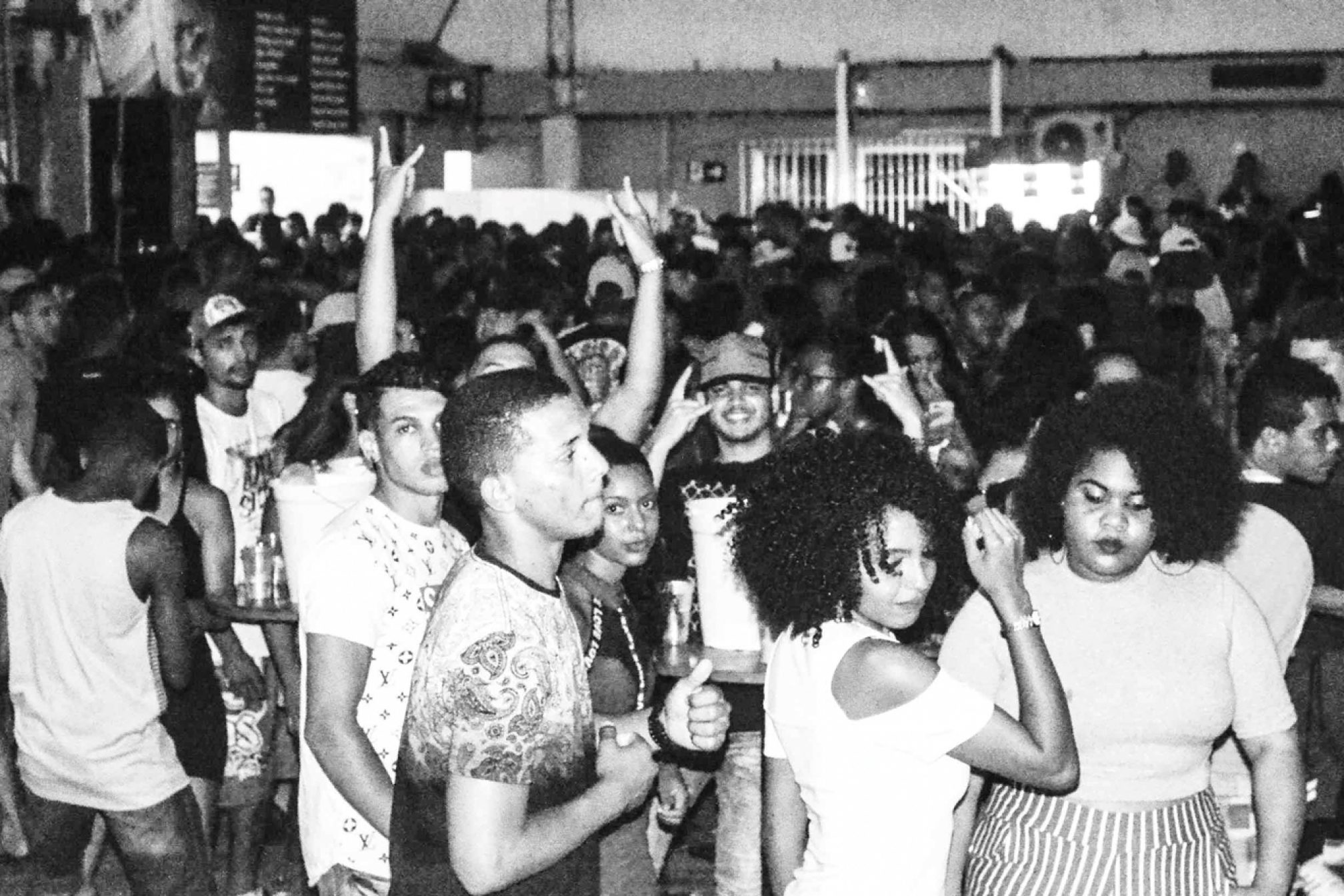 The genre has its roots in brega (literally meaning ‘tacky’), a north-eastern music style popular in the 1980s and 90s played by artists like Reginaldo Rossi. Brega songs were love ballads that – as GG Albuquerque, a local DJ and music journalist, tells us – “were performed in closed concerts for an older crowd who would pay to see the bands”. During the 1990s, some younger brega artists also performed at free parties that showcased a north-eastern take on the ‘funk carioca’ from Rio de Janeiro’s favelas, which in turn was influenced by Miami bass. There the vibe was younger and more aggressive; singers would represent their bairros (neighbourhoods), and fights would often break out. Towards the end of the decade, artists began to experiment with new sounds: as MC Leozinho, one of the pioneers of the genre, tells us, “we combined brega with the beat of funk and took over the dance”.

In the 2010s brega funk began to bubble on the outskirts of Recife. Like all great music genres there is mystique as to where the sound originates from. The beats are neither brega, nor funk, but something completely new. Some say it was influenced by reggaeton or the soca rhythms of the Caribbean. Key elements such as the often-used piano chords shift key in a manner similar to reggae; the clinking, offbeat rhythm works a bit like forró (a style from the countryside of Pernambuco, where a large triangle maintains the beat like a hi-hat), and the use of midi horn sounds seem to mimic the frevo brass music of Recife’s Carnival Bloco parades. The sound is ever developing, and today, as Dany Bala, one of biggest current producers, explains, “it has influences from Latin genres and also electronic music like trap”.

Brega funk is similar to other forms of urban music in its DIY approach. Beats are made on home computers and – as with a lot of grime, trap and hip hop – many are produced on FruityLoops (FL Studio). The economic boom of the last decade and the policies of the former Worker’s Party government saw increased upward mobility and consumerism that gave more people, including musicians, access to cheaper technology. The beats themselves often sound a bit budget, with producers using midi brass and guitar sounds reminiscent of early Casio keyboards. But it would be a mistake to think that the production is low-skilled: the sliding bass and complex ever-changing drum patterns are no easy feat. As GG says, “nearly all the producers are also musicians”. 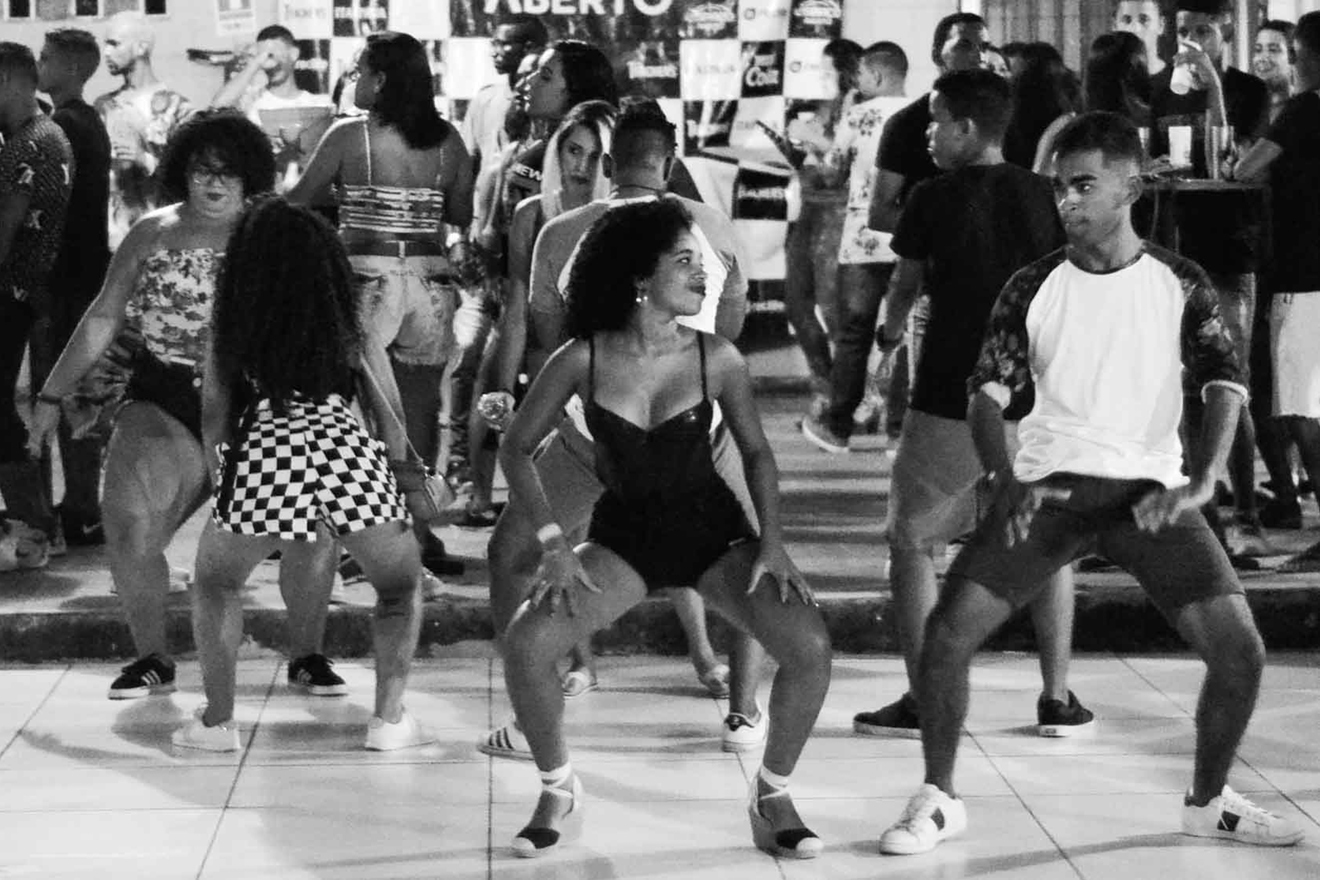 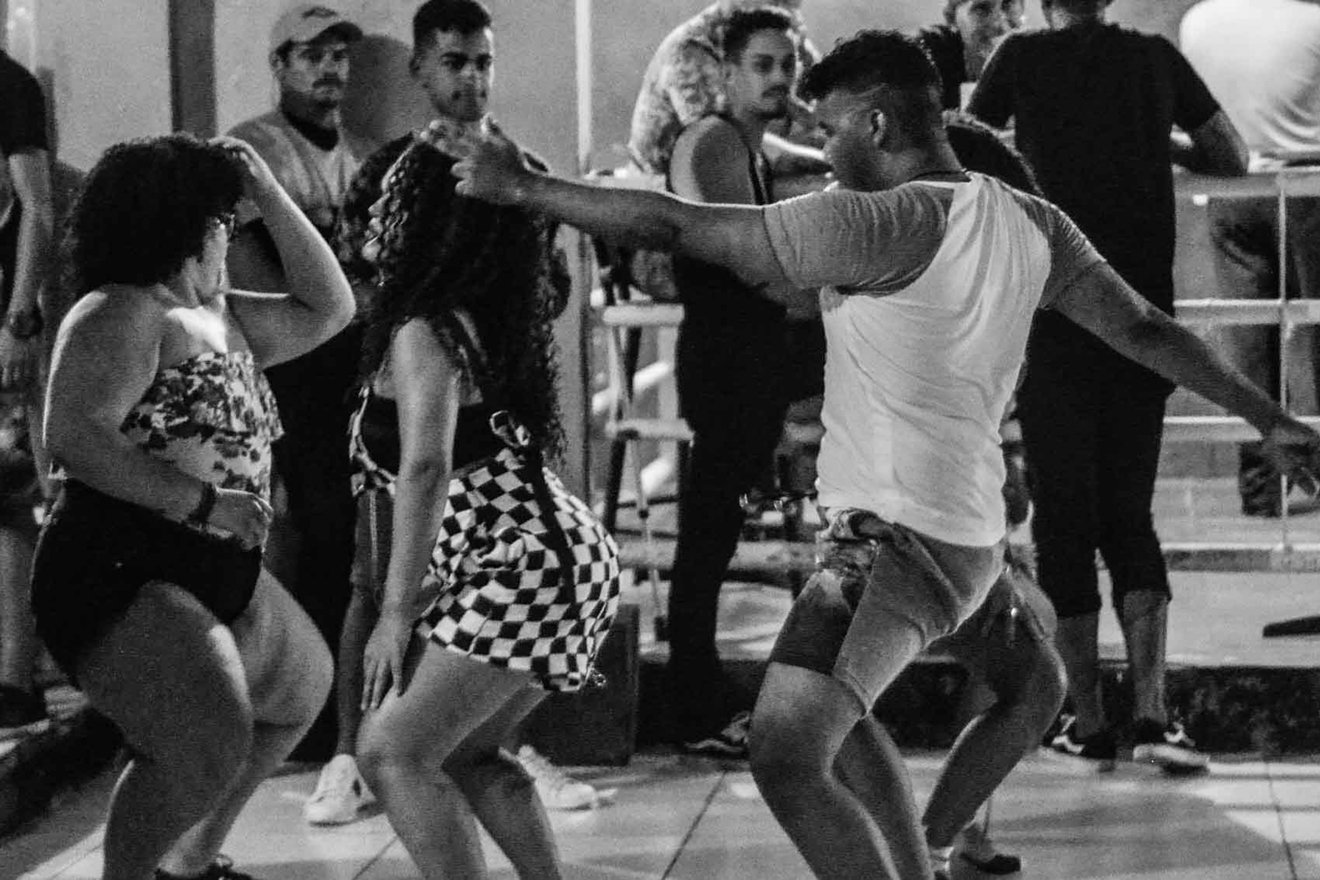 Wordplay can be found everywhere in Brazilian life, and brega funk lyrics are no different. Songs are steeped in Recife slang, something which, due to the popularity of the music, has begun to influence urban culture in São Paulo. Many of the terms are cryptic to the majority of Brazilians, let alone to foreigners. MC Loma even published an explainer video of the lyrics to ‘Envolvimento’, revealing that the popular refrain “Escama só de peixe waaahhhh” refers to the slang term ‘escamosos’ (fish scaled – meaning ‘bad guy’). MC Loma ridicules these escamosos and their supposed toughness with the line: “scales are only for fish waaahhhh”.

Criticism is often levelled at male rappers for their alleged machismo, and while putaria (literally ‘whore-things’) is key to brega funk’s lyrics and aesthetic, many argue that the lyrics are not to be taken too seriously. It’s true that women bent over and shaking their bundas (bums) in the reboladinha dance style can look submissive to an outsider, but this is a serious dance that requires skill and practice. “Some girls dance for boys’ attention, but I dance because I like to”, says Adriane. A lot of women dance with each other, almost in a competitive way, and men are also welcome to take part. Adriane agrees that there are “certain lyrics that objectify women”, but says that at the last party she attended “we talked about female empowerment”. 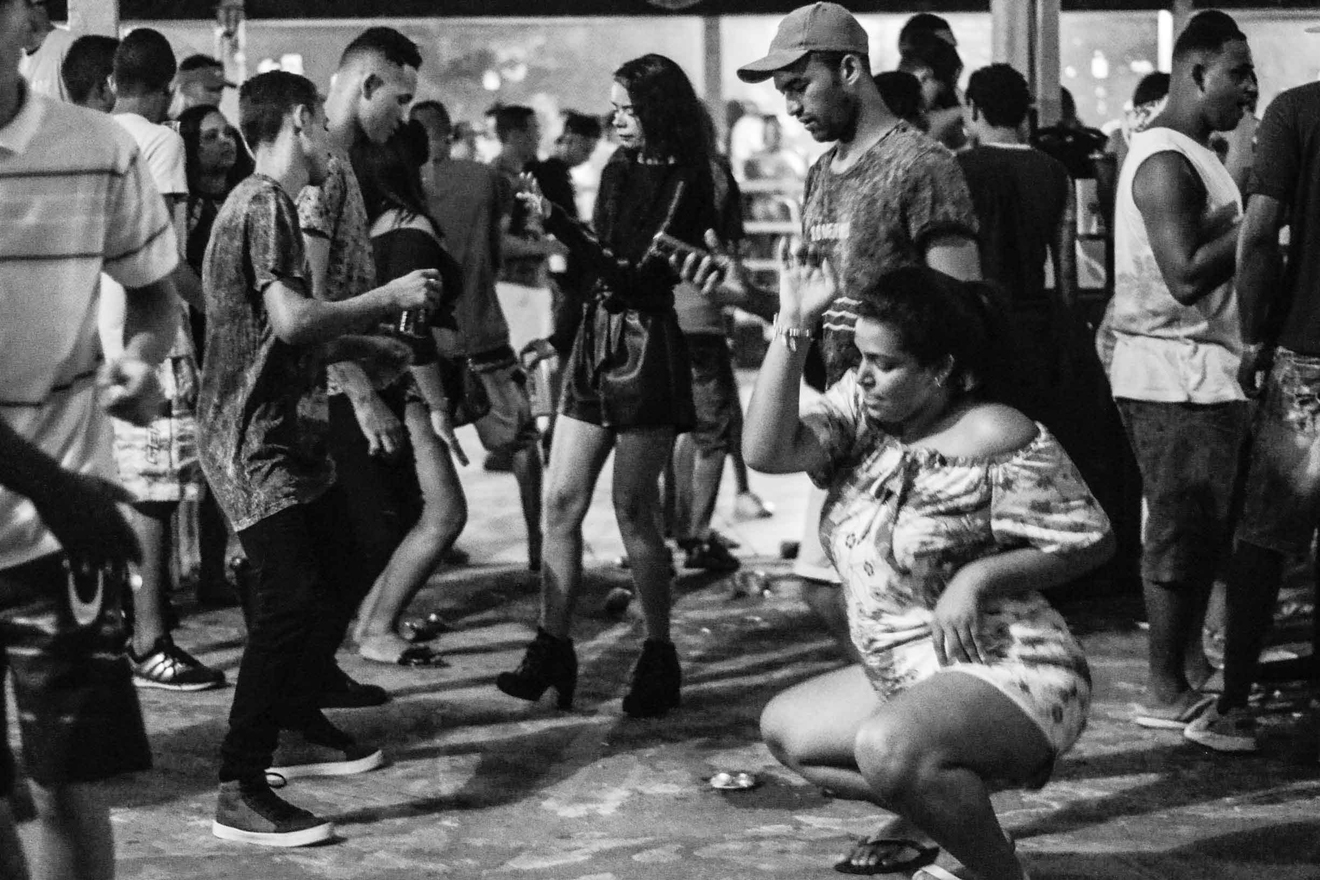 The in-your-face brashness of brega funk reflects the extreme conditions out of which the music originates: the often-dangerous peripheral suburbs in the capital of Brazil’s poorest region. It is the antithesis to the city’s other popular music, like Sertanejo universitário, popular with Brazil’s businessmen and agribusiness politicians, which looks and sounds conservative: expensive stage sets and flawless performers with perfect hair and shining white teeth.

Contrast this with ‘Gera Bactéria’, a recent track from MC Shevchenko & Elloco, on which the legendary singer proudly pronounces: “I was born in the Favela, there everything’s brega”. Or the video for the recent hit ‘Toma Treu’, entirely set in one of Recife’s comunidades, which features rappers Robinho Destaky & Fernando Problema arriving by moto-taxi, a form of transport mainly used by poor people. In MC Nedved’s video for ‘Tome Baby’ he raps “she loves the favela” while a girl dances around him in a small breezeblock bedroom. As the producer Dany Bala explains: “the music is a representation of the periphery”.

In downtown Boa Vista, a busy central commercial district by day and a semi-abandoned neighbourhood at night, students and hipsters gather outside a trendy bar, and soon people are dancing in the street to the soundtrack of brega funk.

Emerging from Recife’s peripheries, brega funk has already found favour with the city’s middle classes, and now the genre is conquering the rest of Brazil – and who knows, after that maybe the world.