Black Coffee: "I'm carrying so many young hearts with me who are dreaming of doing what I do” - Features - Mixmag
Home Latest News Menu

It’s the overcast second day of the live-streamed South Africa Music Week Conference in Sandton, Johannesburg. On stage sit Lemon & Herb, Da Capo and Black Coffee, the pioneering producers of the Africa Is Not a Jungle platform, discussing how their work is designed to catapult South African sounds into the global arena. They elaborate on the state of their dance music scene, and how the world’s attention is fixed on South Africa’s contribution to music at large – a phenomenon that has been decades in process. As the hour comes to a close, the presenter enthusiastically swivels back toward us before making one last proclamation: “Thank you again to Black Coffee, the face of South African music!”

Read this next: Black Coffee is leading a music industry revolution

Nkosinathi Maphumulo, known as the odds-defying DJ and producer Black Coffee, has had an astounding career trajectory. He laughs as I bring up his new title during our conversation, less than an hour later.

“I wanted to dispute that, but I thought... It’s ok. I don’t know who decides on such things but I understand where it’s coming from. It’s what I do. I am representative of our scene as a South African artist. I play our local songs globally, and I carry our music culture basically wherever I go.”

Starting with his groundbreaking remix of ‘Stimela’, through ‘Home Brewed’, ‘Pieces of Me’, ‘Music is King’ and ‘Africa Rising’, he’s brought in a barrage of awards and appearances along with his Africa is Not a Jungle brand, whilst hoisting up local talents alongside him on every platform imaginable for a DJ in his prime.

Over the years, he’s embarked on ventures beyond music-making, including acquiring a ”significant” slice of Gallo Music Investment, owners of the largest and oldest archive of South African musical recordings in the world. Along with his many philanthropic efforts, and a consistent push to change the narratives surrounding “World Music”, a thematically strong golden thread has been sewn into the fabric of his career, with Coffee moving (almost) seamlessly through avenues often comparable to the eye of a needle for folks who came up as he did. In this, he has shouldered the responsibility that many ambitious Black folk who have come up one-at-a-time are expected to, in becoming representative of an entire continent, let alone an entire country, or an entire genre of music. I ask him if this fact has ever become burdensome, and he responds with the grace of someone who’s made peace with his purpose:

“It gives meaning to what I do, to know that I have this kind of responsibility, and I'm able to understand that it's not just about me. What I'm required to do is different from what my peers from Europe are required to do, because our backgrounds are so different; the way our people think and the way European kids think are different; the access they have versus what we have in South Africa are completely different things. Also in reference to myself as a young kid, who always thought anything from ‘outside’ is better. Now we know what we have is strong. I'm not just here to play music, I'm telling a much bigger story and I'm carrying so many young hearts with me who are dreaming of and wanting to do what I do.” 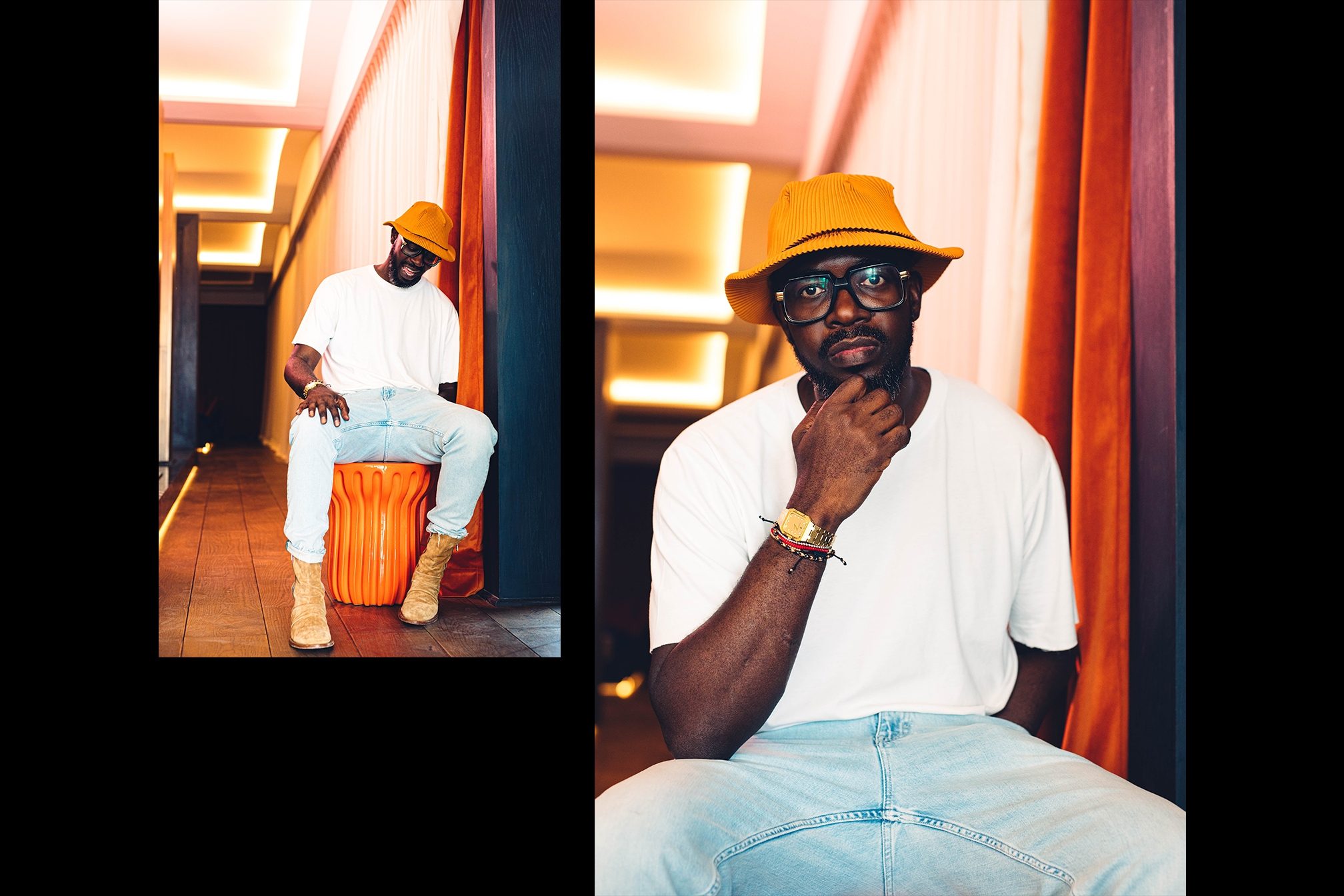 By now, we all know his story. Hailing from a KwaZulu Natal township burdened by the fallout of political and racial unrest, to losing the use of his left arm in a tragic car accident, Coffee has seen dark times, as well as moments most would say were impossible to achieve had he not done just that.

Read this next: Dwson symbolises the united future of South African dance music

On his latest studio album, however, there seemed to be a shift in his approach. Drawn out over a longer stretch of single releases, the expectation of tracks embodying the spirited African polyrhythms of Toshi or Thandiswa were left unrequited. Instead, 'Subconsciously' offers up new textures in the chart-topping pop stylings of Sabrina Claudio, Jozzy and Cassie. Where Ringo, Zano and Nakhane once were, we hear Usher and Pharell. The only two South African acts to appear on 'Subconsciously' are Sun El Musician and Msaki, who have endeared themselves to audiences worldwide with their consistently seminal work. Since the 2019 release of David Guetta and Delilah Montague’s collaborative first single for the album in ‘Drive’, the oppositional responses to Coffee’s creative choices unearth a slew of questions about how we listen, and for what; how we expect artists to evolve and how we evolve with them. Often, subconsciously, we listen through a filter of our own beliefs about what music is “good”, “authentic” or “real”. Subconsciously, we listen to hear a reflection of ourselves and what we like or prefer. And any deviation from this leaves us feeling disappointed, or even betrayed.

“Why aren’t there more African features?”
“This doesn’t sound like him. What happened?”
“The Coffee we know would never...”
“This album isn’t for us. He sold out.”

This is exactly the mentality that confines Black artists to genres such as deep house, r'n'b and hip hop, even in their pop success. If Black music is inherent to pop music, then somewhere along the line we have been duped into thinking the choices he’s made on this album would work against our scene’s evolution. These limiting beliefs have become the moral compass with which we hope our favourite acts will break new ground. Ever the same song and dance, we hold onto the expectation that pristine, single-origin sounds preserve our presence in the limelight, forgetting that progress can only be made if we explore new territories.

Read this next: Shimza is using house music to connect South Africa to the rest of the world

Here, Black Coffee believes in directing himself inward, toward a true north that allows him to reach audiences beyond the borders of his belief systems. In this, Subconsciously could be the conversation starter our scene needs in order to challenge itself and address its latencies. In the final stretch toward its release, fans questioning his motives eventually drove Coffee to go live on Instagram to defend his creative choices. He asked for his listeners’ trust, and ensured us that he knew what he was doing. It became clear we had assigned him our intentions, our dreams and our legacy, deciding what this album was supposed to be, on his behalf. 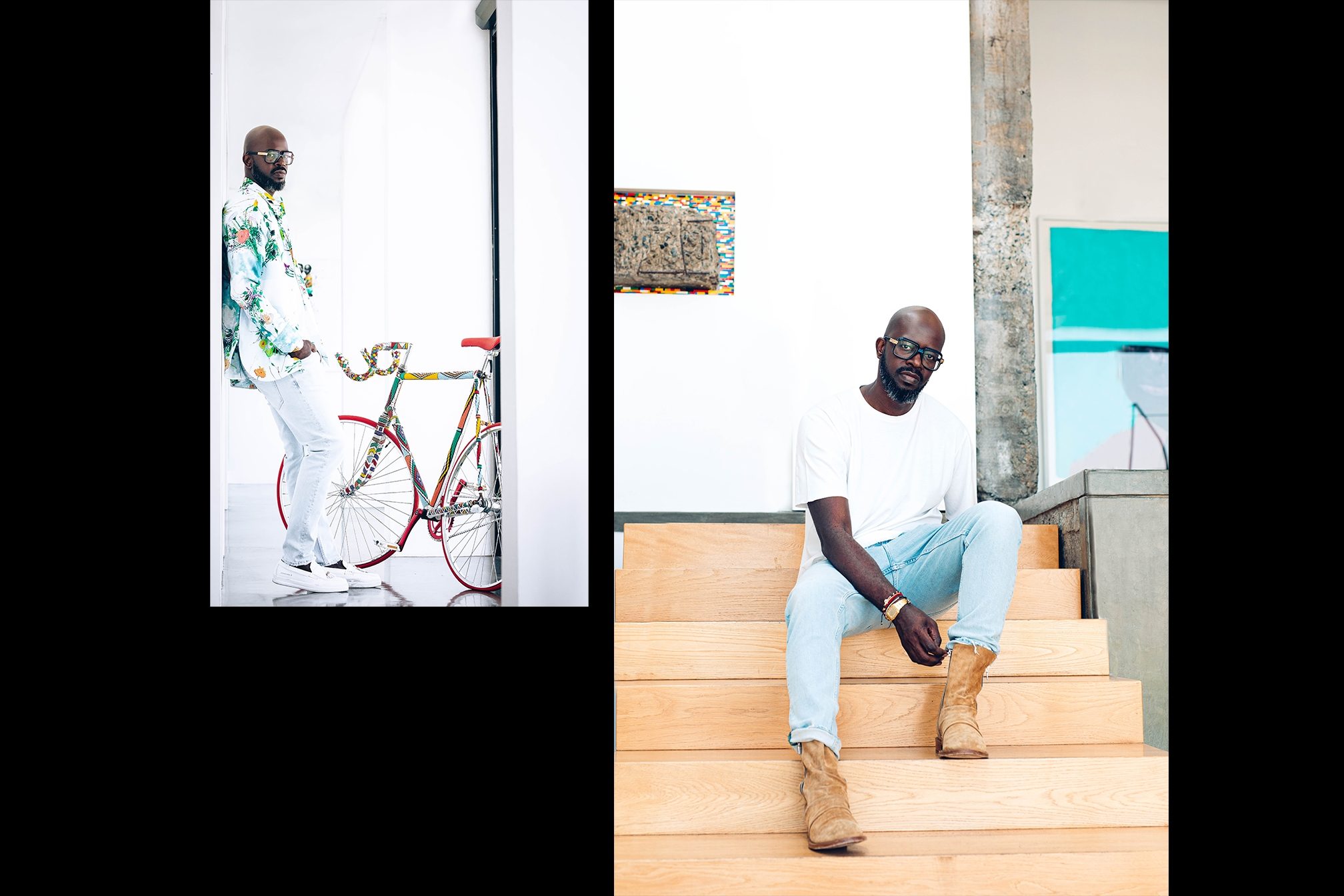 “I want to exist not just to house music fans, but to music fans in general, while at the same time growing the house music scene and taking it into places that it wouldn't have made sense to be. When it comes to the album having less African features on it than what I usually do, all of that was done because I need to get access to a place where I can help other people, but to do that, I need to fill my cup first. I have to fill my cup so that I'm able to pour into others. I want to be a global player while carrying the ones that I can carry. This way, I'm able to be the bridge I need to be, and connect my fellow African artists to the network I have created. But I won't be able to create this network if I'm not intentional about creating in it… I need to focus on what I’m trying to achieve on my own, first.”

Read this next: How house music united the nation of South Africa

The responsibility we place on artists to represent us is flattering, yet problematic. Africa is indeed not a jungle, nor is it a monolith stowed on the back of chosen individuals who we deem capable because of their ability to scale the walls society has built. The journey we are on is a collective one. Our continent is vast and voraciously creative, teeming with DJs and producers waiting their turn behind locked doors. Could this be the album that Black Coffee wants, the album South African house music needs and a key enabling the ones who follow to go from grassroots to GRAMMYs?

"Before, I was strictly a house music producer, where I wanted to exist more in that scene than anywhere else. Now, my goals are different. The producer side of me wants to make music that I really love, and it’s not just about making house music. As a DJ I carry house, and I expose people to different producers of house all over the world. Every single from the album surprised me. Regardless of the mixed feelings, 'Never Gonna Forget' churned up half a million streams in less than 24 hours and it was big for me. That’s rare in what I do. I could make an album for what South Africans want, but that’s not what I want. From the very first album before anyone knew what Black Coffee was about, 'til now, I’ve always led with what I want and it’s worked.” 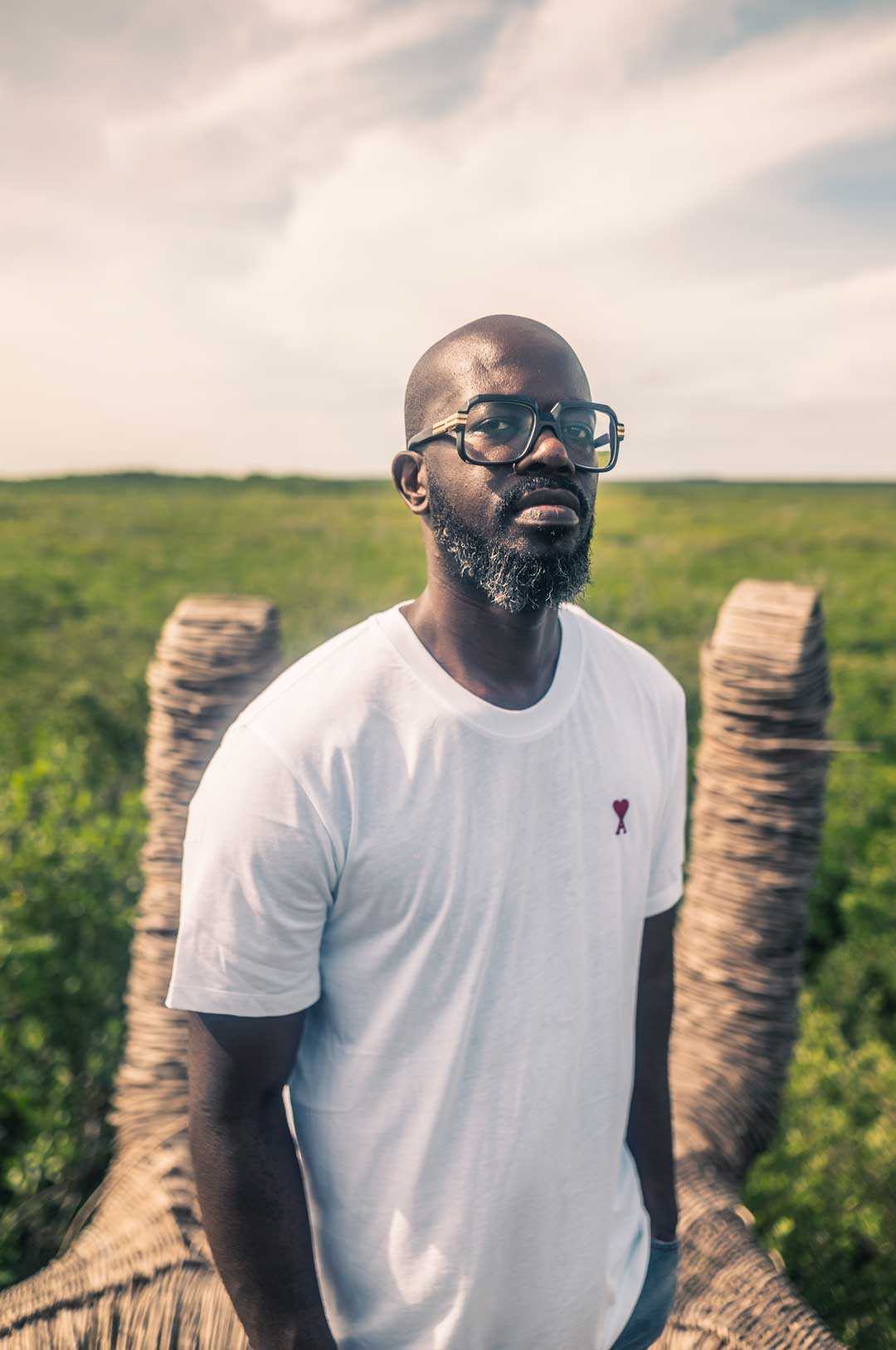 He’s not wrong. Subconsciously has to date gained over a hundred million streams, even before it’s February 5th release date. As of February 6th, the album has climbed high at iTunes, charting at number 7 on Global, number 5 in Italy, number 7 in the US and Spain, number 9 in the UK, number 11 in Germany and number 12 in Canada. What Coffee wants is to stand shoulder to shoulder with the greatest musicians of our time, and by the look of it this goal is well within his reach. Now the pioneering curator of Apple Music’s new African dance music venture Isgubhu blazing yet more trails for the continent’s digital advancement and if anything, he has doubled down on his use of music as a tool for change, proudly stating that the album to follow this one will be his biggest and best work yet. Perhaps what we need is to listen for what the music does, instead of what the music is.

“There’s a version of you that other people uphold. But we all have that little voice [inside] that says to us 'this is what I really want to be' and usually that voice is filtered by other people's thoughts and ideas of what you should be. So it's up to you to try to be true to your real self. Your real thoughts. The real you. Once you master that, especially if you are born in a dark place with no hope, it's always there for you, no matter what everyone around you is saying. That voice is the only thing that will make you who you are supposed to be.” 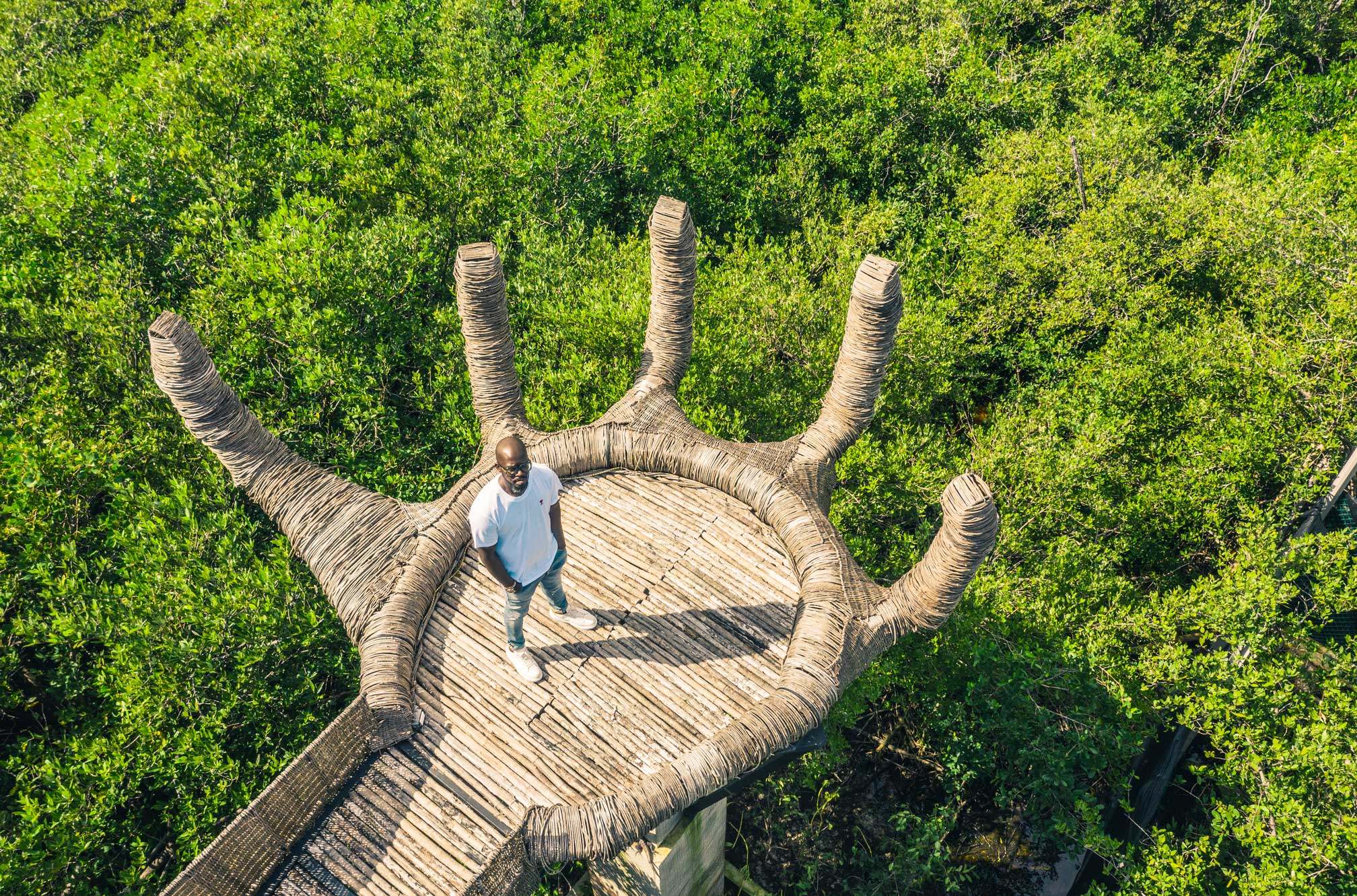 Whoever he is to us – “the face of South African music”, the businessman, the brand, the producer, the pioneer, the sell-out or the saviour – Black Coffee will continue to pour everything he has into his quest for global domination. Odds are, whatever he’s destined for will be something to talk about for years to come.