In Accra the sun doesn’t sink: it drops. At 7:PM on Friday, Ghana’s capital switches from blazing daylight to night sky quick as a flicked switch. The city keeps pushing. Vehicles gridlock the streets for hours. Roadside hawkers weave between the traffic, pulling wares from the towering bundles balanced on their heads and haggling at car windows. As the day workers board over-stuffed Trotro buses to head out to the further suburbs, the central district of Accra – a dusty bustle of bars, cafes, storefronts and street vendors that has been nicknamed Oxford Street – remains jumbled with people. A cacophony of blaring traffic, random shouting and distorted music comes from all angles. The city is alive 24/7.

We hit the first venue, Bloom Bar, around 2am. The people here are pretty laid back, and parties get started late. An open-air club with sleek wooden decking, the place is rammed with young, hip Ghanaians, here to vibe to current man of the moment, iPhone DJ aka Otoo Mensah. Having won the Best Campus DJ category of 2018’s Ghana DJ awards, iPhone DJ has rapidly burst out of the uni circuit and into the major Accra clubs, scoring a residency at Bloom Bar despite only having been DJing since 2017. His name is a spoiler: to the vocal horror of a handful of Ghana’s old-school DJs (and possibly a few people reading this) iPhoneDJ quite literally mixes off his iPhone, blending tracks using the DJay2 app.

This gimmick wasn’t by design; he started mixing together local bangers on his phone at university, playing them loud through the massive speakers he installed in his dorm room. Passers-by would ask him to record his mixes and send them the file. Soon enough he started getting booked to play at college raves, and as the phone app was the only thing he really knew, he stuck with it. At Bloom Bar, there’s no denying that watching a DJ running the music from the palm of his hand has a slightly disconcerting effect, but there’s no doubting his skills as with microscopic twitches he cuts the feel-good mid-tempo afro-bashment vibes of Afro B’s ‘Drogba’ (which we hear everywhere in Ghana) into a cut from local heroes R2Bees.

For the majority of his set (Afro B aside), iPhone DJ sticks to local cuts. As we’re still in what Ghanaians would view as the start of the night, he’s sticking to the slower BPMs, from 100 to 110, with stand-out moments coming as he drops the throaty rap of breaking hip hop MC B4Bonah, followed by further deft lyricism from Medikal, currently the biggest MC in Ghana. Both artists typify the new sound emerging from the Ghanaian underground, where traditional hip hop lyricism and flow is layered over nagging, energetic dancehall drum patterns. Analogue instruments (guitar licks, brass) colliding with mutated electronic melodies. 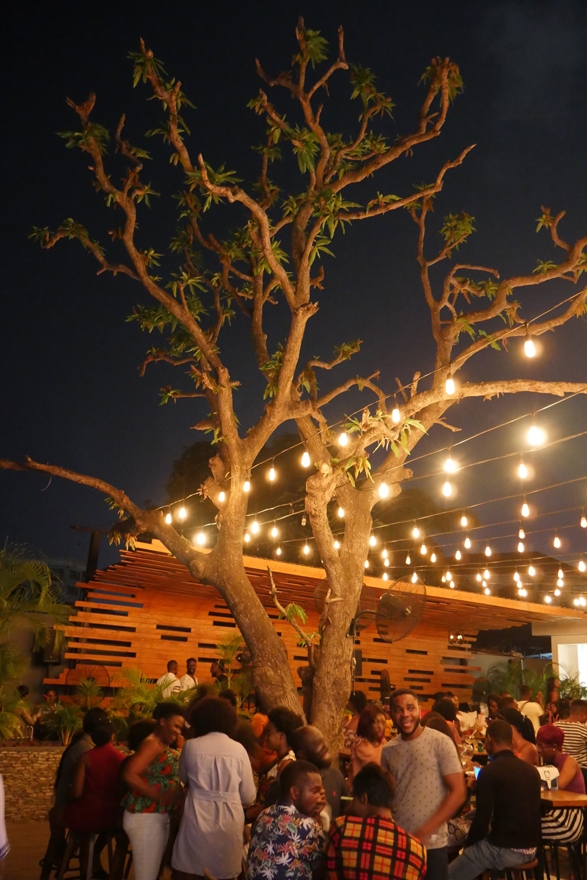 There’s a change in energy; iPhone DJ drops one of the day-glo Afrofuturist cuts made by current rising local crew La Même Gang, a sound somewhere between the syncopated rhythms of afrobeats and the 140BPM, speaker-rattling bass of trap, and a corner of Bloom Bar erupts. It turns out half of La Même are here, and the tightly cropped, bleached blonde hair of rapper RJZ can be seen above the crowd as he leaps on a table, dashing liquor from a bottle to all and sundry. There’s a celebratory mood in the air. The crew are joined at their table by Boj, recent Skepta collaborator, who’s flown out from Nigeria to make music with them. He’s accompanied by TeeZee, editor of Lagos style blog The NATIVE: “Accra is a melting pot right now!” he shouts over the music. “You can feel the energy out here, there’s genuine love throughout the city!” Hundreds of phones flash as around us everyone records everything, and there’s a sense of a scene teetering on the edge of going international.

From Bloom Bar we drive over to Twist, currently touted as Ghana’s hottest club. The entrance is manned by a legendarily moody bouncer whose stringent door policy has become so widely known he’s made it into the lyrics of tunes. Luckily we’re OK; we’re charged an entrance fee of 50 Ghanaian Cedi (just under a tenner), which, we’re assured by everyone else in the queue, means that we’re cool – the door tax could easily have been tripled on a whim.

Inside, the venue is modelled on a classic industrial-chic New York spot. The main space is a cube big enough to hold around 300. The walls are all bare brick and steel fittings, speakers in every corner pointing inward, and the DJ booth elevated above the dancefloor. The bar is serving high-end cocktails and bottles of champagne can be seen winging around the club – however, unlike most bottle service clubs, which tend to encourage people to pose at their tables and little else, the dancefloor in Twist is going in.

This is in no small part down to the sheer pace of the soundtrack. At 4am the selector is hammering the uptempo sound that Ghana excels in. Around 2010, a dance sound called azonto came to prominence in the country, combining broadly 4/4 kick drums running anywhere from 125–135BPM, with keyboard stabs hitting on the off-beat, while MCs spat double-time lyrics – think a fusion of techno, UK funky and ska and you’re not a million miles off. In 2019 the sound is re-emerging, this time slightly darker and slightly sparser. Resident DJ Mic Smith gets the biggest response of the night when he draws for the latest Medikal track, ‘Omo Ada [Dem Sleep]’, a tune that’s currently dominating clubs and airwaves in Accra. For a record that is essentially a pop hit in Ghana, it’s stylistically wild, Medikal’s sleazy, knowing tone dripping languidly over a 130BPM beat that’s made of bass bleep, deep sub, carnival snares and little else. The dancefloor works up another notch, the crowd 90 per cent Ghanaian locals joined by a small smattering of tourists sweating as they try to keep up with energy of the new azonto sound.

As with Bloom Bar, the playlist sticks to a mix of West African bangers spliced with occasional UK or US hits. This homegrown ethos is no accident: Twist owner Eric keeps the club’s music policy tightly controlled. “I only use resident DJs,” he tells us over shots of high-end tequila, “and we rehearse. On Thursdays every week we spend about six hours rehearsing for the weekend, and we’ll support local artists in the club – it’s my duty to. I’ll hunt down tunes online and give them to the DJs to break.” He pauses to help pass a bottle out into the crowd, its sparkling neon ice bucket momentarily lighting up our faces. “It’s a really exciting time for Ghana, a lot of people are doing a lot with very little,” he says. “I don’t know if any other African countries can compare to us for growth. We’re small, but we’re gonna get there y’all.”