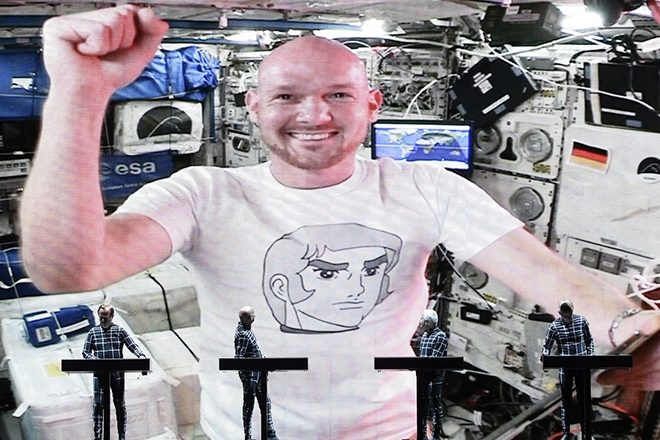 Kraftwerk closed out their set at the Jazz Open Festival in Stuttgart, Germany on July 20, 2018 with an extraordinary in-orbit collaboration. Teaming up with the German ESA astronaut Alexander Gerst - who is currently residing on the International Space Station (ISS) - the spaceman hopped on a video call with Kraftwerk and festival attendees to perform alongside the group. Gerst played out the melody of the track 'Spacelab' from Kraftwerk's 1978 album 'The Man Machine' alongside Kraftwerk in real time with his tablet synth software for an audience of 7500 people.

Floating 250 miles above the earth on "the outpost of humanity" as Gerst puts it, the astronaut took a moment to addresses the crowd for a small lesson in space. Gerst told the audience, "the ISS is a 'man-machine,' the most complex and valuable machine humankind has ever built."

He reminded the audience that the team aboard the ISS are currently "researching things that will improve daily life on earth" and are "developing technologies" that will help humans "grow beyond our current horizons."

It's safe to say that Kraftwerk has become the first group to perform a live concert alongside an astronaut in space. We couldn't think of a more appropriate pairing if we tried.

You can watch the fantastic and unique performance in the video below.