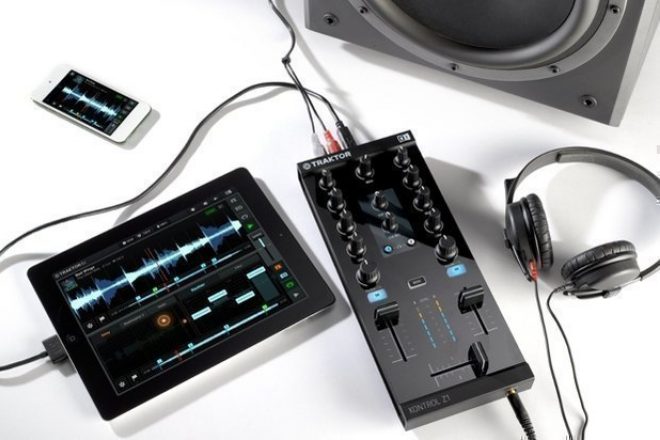 Some of the best DJing apps available, Traktor for iPhone and Traktor for iPad offer a great way to blend tracks with an iDevice. Fully embracing the possibilities of a touch screen, both apps make for intuitive mixing - with effects such as flangers, loops and filters available at your fingertips. However, despite clever design, at times the apps still feel somewhat fiddly - especially on the iPhone's smaller screen.

In response Traktor have unleashed the Z1, a new controller designed primarily for use with Apple's devices. Featuring physical buttons for all features on the app, the stripped down Z1 controller eschews jogwheels but significantly adds a PA ready out.

Featuring the same solid fit and finish as other products in the Traktor range, the Z will be a familiar face for existing Traktor users - and if you're using the full version of the software you'll find the Z1's knobs and faders echoing the UI on the screen. For DJ's using the iOS versions of the DJing software, the Z1 will take much of the fiddle or hassle out of mixing thanks to its physical buttons - allowing more complex blends to be pulled off. In addition to its tried and tested physical controls, the Z1 also throws in a output suitable for a PA. As a result, you can set up with only a Z1 and an iOS device, so you won't always need to lug around laptop and full-sized needed to play at a venue. As well being much lighter than a full sized set up, the PA output also means a far cheaper start up cost to prospective DJ's. The only catch? Those with an iPhone 5 or iPad Mini will have to buy an adaptor - as the Z1 is not compatible with Apple's new Lightning connection.

Compatible with full versions of Traktor and with the same bulletproof construction as the rest of the range, Traktor's Z1 represents a versatile DJing tool. Small enough to carry easily but functional enough for a proficient set, the Z1 is a great way of throwing a mix together - whatever the occasion.