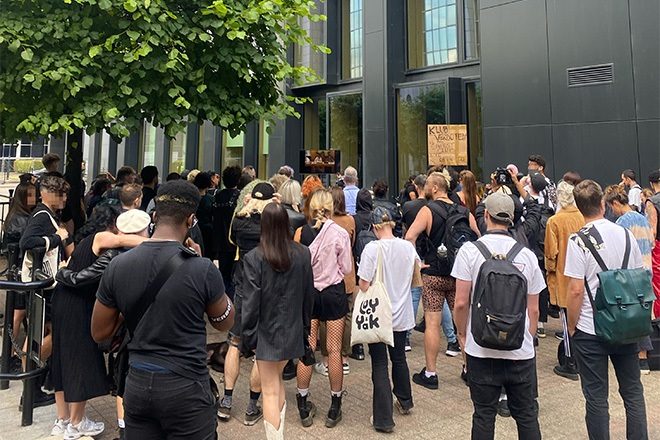 Tower Hamlets Council has removed a restrictive clause in its licensing terms that prohibited "full nudity" within nightlife venues, following a protest from queer nightlife groups.

The decision comes following a hearing last week (Tuesday 26 July), over the licensing terms of East London venue E1 / Studio Places, proposing an end to semi-nudity and nudity within the club.

The venue is home to a number of queer parties including kink-friendly event Klub Verboten, who were contacted by Tower Hamlets Council in March requesting that it prohibit nudity and try to limit semi-nudity.

Following the complaint, a hearing was set for July over the future of E1, with fears from many within the queer and kink communities that the ruling could have a knock-on effect on the rest of the borough and London as a whole.

Read this next: Queer nightlife groups organise protest to 'save kink spaces in London'

Organisers behind Klub Verboten organised a #savekinkspaces protest outside Tower Hamlets Town Hall during the hearing. Organiser Karl Verboten said in a statement to Mixmag ahead of the protest: "The council is relying on outdated and moralist views without any regard for diversity and inclusivity in the night-time economy."

"Tower Hamlets Council is trying to force its judgmentalism on club operators and promoters, forcing them to police gender and sexuality on consenting adults."

As part of the Save Kink Spaces protest, hundreds of people from the queer, kink and fetish communities descended on Tower Hamlets Town Hall in Poplar.

Many turned up dressed in head-to-toe fetish wear, some had brought along their dogs and some brandished signs reading slogans like: "sexual liberty under threat" and "bottoms or tops, we all hate cops."

Read this next: Fetish and queer parties are being targeted by Tower Hamlets council

As the hearing began, the crowd watched on a small screen at the hall's exterior quietly — taking time to cheer as barrister Leo Charalambides, who was representing the appeal on E1's behalf, read out statements in defence of the venue and the wider community.

"I just joined [Klub Verboten] at the end of last year and it was the best club I’ve ever been to," one attendee at the Save Kink Spaces protest told Mixmag. "To be around sexually open people made me so happy, being in a safe environment — it's one of the best things you can do. There is no harm being done whatsoever — especially compared to normal clubs there is more harm happening there."

Another attendee, who had moved to London from Berlin, lambasted the city's lack of understanding of sex-positive culture: "I see a lot of security, a lot of control — there isn’t a lot of agency for the venue owners, for those throwing parties, for guests to create their own spaces. More trust would be good for a city like London to create these spaces."

Read this next: Gegen offers Berlin's queer community a space to be free

"Tower Hamlets is now the most progressive council around by actively acknowledging and supporting the existence of kinksters. It's a first step towards working collectively on creating safer spaces with local kink communities and authorities."

"It took three years longer than we would have hoped for, but we are super grateful to the committee for taking the time to understand the people of our community free of stigma"

London Night Czar Amy Lamé also celebrated the news on Twitter: Great news!!! I’m thrilled E1 has had success with the removal of their restrictive licensing conditions — and I’m very proud I was able to help. The venue can once again host diverse, inclusive and safe events. RESULT! "