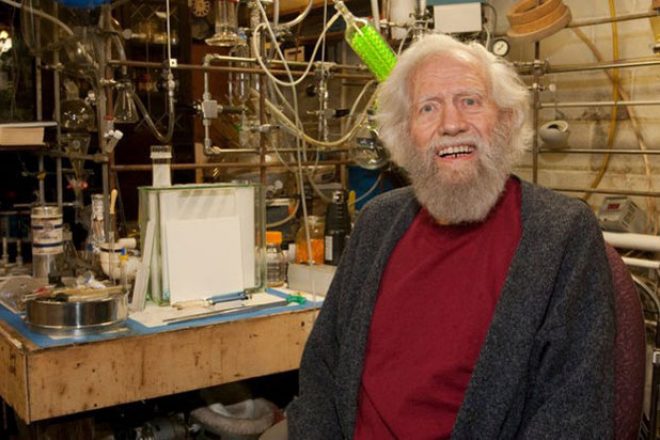 Alexander Shulgin was the Godfather of Ecstasy, playing an instrumental part in introducing the drug to the wider world and, in turn, helping shape club culture as we know it today. He passed away last week, leaving behind a lifetime's worth of research. A cult hero, here are the 12 most important drugs that passed through his famous Californian laboratory.

MDMA
The daddy of them all. You now read Mixmag and go clubbing, and perhaps take Ecstasy. There is a direct and traceable lineage between this, and this moment, which Shulgin documented in his book PIHKAL: (With 120mg) "The woodpile is so beautiful, about all the joy and beauty that I can stand. I am afraid to turn around and face the mountains, for fear they will overpower me. But I did look, and I am astounded. Everyone must get to experience a profound state like this. I feel totally peaceful. I have lived all my life to get here, and I feel I have come home. I am complete."

MDA
The parent compound to which MDMA is related, this drug appeared in the UK in 1992 in the guise of Snowballs, German-commissioned pills made in Latvia. They were dosed at double the standard dose for MDA, and led to many confusing scenes on dancefloors nationwide as users, baffled by the sudden proliferation of ravers in 1950s spectacles, attempted to sit down on wholly imaginary sofas on the dancefloor, or tried to put money into a fag machine that was, in fact, a friend's head.

ALEPH 1
Shulgin wrote in his notebook: "Tell NO ONE about this drug so that it can never be identified and there can be no moves made to destroy it… Persisting in scientific publication in all peripheral areas as subterfuge, diversion. Keep all progressive work in my appendices. Code them 'SH'—too informative." It was "too informative" because Shulgin believes ALEPH-1 is the "essence of power", he told journalist Hamilton Morris in his last interview. He published anyway. It sounds awful: "It gives an interesting example of some thought processes associated with psychedelic intoxication, ego-inflation, and what might be thought of as bits of mania," he wrote in PIHKAL.

DIPT
The campanologist's friend – or foe. This tryptamine – a mushroom-like drug – makes all sounds appear to drop by an octave or so, and makes many instruments sound like a clanging bell. But it offers a fascinating insight into the way humans process sound, and may one day help in the study of tinnitus, which it can temporarily cause.

5-MEO-DIPT
Known as Foxy Methoxy, this drug was renowned in the late 90s psychonaut scene as an early Viagra, with massive stimulation and explosive orgasms for both men and women (and sometimes a little sexy projectile vomiting).

MMDA
MDMA-like drug that gave users 'eyelid movies' – completely realistic innervisions. A PIHKALrecipient noted: "Upon closing eyes hallucinations appear to be quite real in 3D, like watching a movie. First these dreams appear in black and white, but later colors start appearing. Chartreuse and magenta first appear, then blue and finally red. First I had visions of large numbers on gaming tables, then people."

The Magical Half Dozen
These were the drugs that Shulgin said, out of the thousands he designed and took, were the most important

Mescaline
Usually found in cacti in Latin America, Shulgin made it in his garden shed laboratory. "I experienced the desire to laugh hysterically at what I could only describe as the completely ridiculous state of the entire world," he noted.

DOM
DOM was popularised following the outlawing of LSD in the US. It is said to have sent Syd Barrett of Pink Floyd insane. It filled the emergency wards of Haight-Ashbury in the late 60s with hippy burn-outs who'd overdone it, as it lasts for many hours. It was also known as STP (Serenity, Tranquility, Peace) – and the famously debauched 1972 Stones tour of the US was, some say, named after the drug.

2C-E
Known by Shulgin as 'the teacher', it could produce introspective and transformative experiences that helped people face their own demons – and change for the better, he said.

2C-T-2
Another tool for introspection that Shulgin took and pondered on the nature of war, ego, and attention-seeking, seeing them as the same thing.

2C-T-7
Sold in Japanese headshops in the late 1990s as Blue Mystic Powder, the drug was responsible for three deaths on 2000 – when the research chemical scene first hit the headlines. Users snorted it, or took it at the same time as MDMA, or took five times the standard dose.