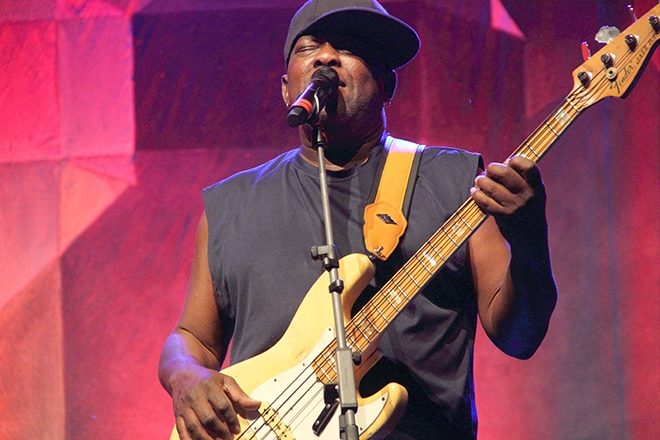 One half of the duo Sly and Robbie with Sly Dunbar, GRAMMY-winning bassist and record producer Robbie Shakespeare has died aged 68.

After recently undergoing kidney related surgery he had been in a hospital in Florida according to The Jamaica Gleaner.

As a producer he worked and played with a long list of artists including Bob Dylan, Mick Jagger, Paul McCartney, Talking Heads, Madonna, Britney Spears, No Doubt and Grace Jones.

A career of almost 50 years in the music industry saw Shakespeare get nominated for 13 GRAMMY awards and win two, one for best reggae recording with ‘Anthem’ in 1984 and the other for best reggae album with ‘Friends’ in 1998.

Born in Kingston, he was surrounded by music when he was then taught to play the bass from Aston Barrett from The Wailers after meeting in Shakespeare’s backyard.

In the mid-1970s he teamed up with drummer Sly Dunbar and became one to have one of the most influential impacts on reggae and dancehall music.

The duo started their own production company in the late 70s named ‘Taxi Records’ which saw them release countless records from ‘Sly & Robbie Present Taxi’ in 1981 to ‘Dubrising’ in 2014.

Many people have been paying their respects today to the iconic bass player including Jamaican prime minister Andrew Holness who tweeted: “My condolences to the family, friends and fans of Jamaican Reggae musician and record producer, Robbie Shakespeare of the Sly and Robbie fame.”

The PM added: “When it comes to Reggae bass playing, no one comes close to having the influence of Robbie Shakespeare. He will be remembered for his sterling contribution to the music industry and Jamaica’s culture. May his soul Rest In Peace.”

(1/3) My condolences to the family, friends and fans of Jamaican Reggae musician and record producer, Robbie Shakespeare of the Sly and Robbie fame. pic.twitter.com/Q1C1FZBQ4G

The bass is everything in Reggae music and Robbie Shakespeare played his bass guitar like nobody else; he made the beat drop, speaker boxes shook and we rocked.His passing is a tragic loss; his contribution to the genre is immeasurable. RIP Robbie Shakespeare. pic.twitter.com/3JMMtbUrm1