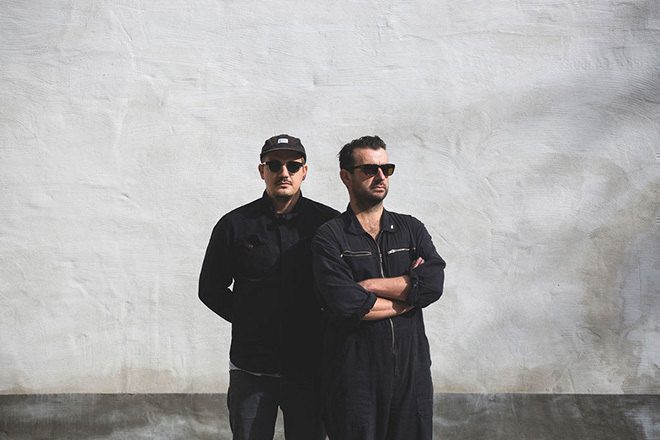 Each week, Mixmag invites the world's most revered artists to bring us an Apple Music playlist, hand-selected by them and curated especially for your listening pleasure.

Not long now until the New Year celebration approaches and it's essential that you've got enough musical ammo to last you the night. Be that at the party before, in the club or at someone's house after, it's got to be good and luckily, Modeselektor have you covered for all eventualities.

The German duo have pushed a gnarly, no-holds-barred techno sound for decades and via Monkeytown and 50 Weapons they've curated some incredible music over the years.

For New Years Day, they'll be playing two gigs in the UK, one in London at Avant Garde and the other in Leeds at Canal Mills. If anyone can do it, and can do it with style and fervour it's Gernot and Szary.

If you're stuck for something to listen to before you head out on the town then look no further as the German power pair have hand-picked a Selects playlist for you and it's got everything you need for a feverish fist pump.

Tracks from Lorenzo Senni, LFO and Frank Ocean have everyone's tastes covered and it's one of our favourite playlists this year. Get involved.

The single came out last Friday (16th December) and after what happened on the 19th in Berlin it is a track that couldn’t suit this list more. The title and the message is clear: Don’t let yourself down because of stuff like this! We need to continue partying extra hard and enjoy every single bit of it! Anything else would be wrong.

This track is part of the Album “Soundtrack [313]“ produced in 1996, a friend offered to me on tape. It has been playing for a long time in my mono cassette tape recorder, most of the time on long rides through the night. As far as I know, there never was a film to this soundtrack, but most of the time the film is in your head anyway.

It is the ultimative breakbeat house revival track. He is such a talented artist. We enjoyed a lot having him play on our stage at Melt! Festival when Zombie had to cancel last minute. It was perfect.

Very fascinating Track, which starts pretty chilled and goes into a break after around 20 seconds: you forget to count for how long it goes and you just think “When does it finally start!!!“ And then it starts, but not in the traditional way. I think it’s the best track of 2016.

A remix to a track from our last album, it is a track that means a lot to us because of our long friendship to Siriusmo. When we first heard it we knew it was something so be played live. Then Solomun made another edit of it to make even more suitable for DJs and club sets. Now we play it live all the time with Moderat.

It feels like going over a very uneven cobblestone road with your car that goes into straight and smooth concrete after 500 meters, but then goes straight back on the cobblestone road after another 100 meters. You feel like being shaken and then let go by the track. Perfectly reduced to bass line and synth. There is no need for more in this track.

Genius track. An intelligent mix of classic Gospel sounds and modern R’n’B vibes. A perfect example of variety that Frank Ocean masters so well. Also a very good track to complete our list.