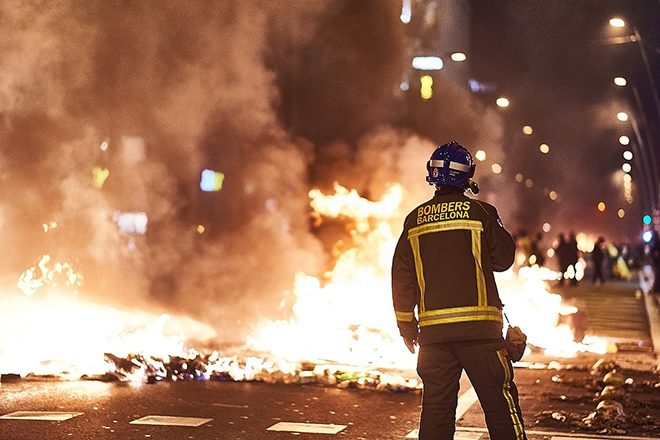 Protestors clashed with police in Spain on Tuesday after taking to the streets to demand the release of rapper Pablo Hasél, who was arrested on charges of glorifying terrorism for lyrics and comments in which he criticised police violence and the Spanish monarchy.

One woman was reported to have suffered an eye injury after being shot by a foam round, and yesterday the Catalan police force Mossos d’Esquadra said 29 arrests had been made in the region and at least 14 were made in Madrid.

Read this next: "Our music scares Nazis away": How Poland's DJs became activists fighting for LGBTQ+ and women's rights

In 2018 Pablo Hasél, real name Pablo Rivadulla Duro, was handed a two-year jail sentence and fine of almost €30,000 for his lyrics and comments, sparking concerns about freedom of speech and state oppression in Spain.

At the time of his sentencing, Spain’s highest criminal court ruled that his words went beyond the limits of free speech and defined them as “hatred and attacks on honour”.

However, Spain’s Deputy Prime Minister Carmen Calvo said to reporters that sending people to prison over freedom of speech matters should not happen in a democracy like Spain.

On appeal, the sentence was reduced to nine months, and Hasél was ordered to report to prison by the end of January. He refused to hand himself in, stating he planned to “make things as difficult as possible for the police” and to highlight “a hugely serious attack” on freedom, and on Monday barricaded himself inside a university in the city of Lleida.

Riot police then entered the building on Tuesday to arrest him, sparking the protests across the country, in which protestors chanted “No more police violence” and “Freedom for Pablo Hasél”.

The protests rolled over to a second night on Wednesday with thousands on the streets of Marid and Barcelona being met by police with batons and shields, with bottles and stones being thrown and met with a response of tear gas and rubber bullets.

Madrid’s mayor José Luis Martinez-Almeida condemend the violence, tweeting: "The violent and those who do not accept the rules have no place in our society."

In the wake of anger about Hasél’s sentencing, last week the Spanish government said it plans to reform free speech laws to introduce milder penalties and only target speech that “clearly involves the creation of a risk to public order or provokes some kind of violent conduct”. This does not prevent Hasél’s imprisonment.

Watch videos of the police clashes via Reuters below.

Barcelona’s streets were on fire as thousands of protesters demanded the release of Spanish rapper Pablo Hasel https://t.co/B0VQY49ld6 pic.twitter.com/c4JI2qHPAC