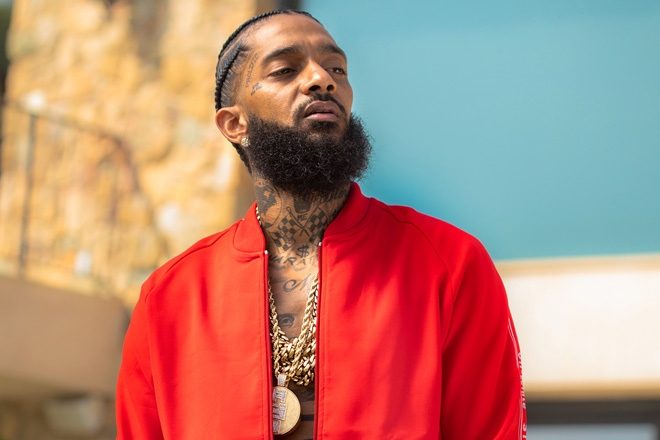 The Grammy-nominated artist, 33, was shot outside his clothing store, The Marathon, at 3.20pm on Sunday. He was rushed to hospital where he was pronounced dead. Two other men were also shot in a "burst of gunfire". They are both in stable condition in hospital.

The gunman has yet to be caught, with Los Angeles police still unsure of how the shooting happened.

Los Angeles police lieutenant Chris Ramirez said: “At this point, we’re not even sure as to whether he walked up, rode a bicycle or drove up in a car."

Hussle, who released his debut album 'Victory Lap' last year, was behind the co-working space Vector 90, which aims to help underprivileged groups in the fields of science, technology, engineering and mathematics. He was also working with the arts project Destination Crenshaw.

LA city councilman Marqueece Harris-Dawson said: “Hussle had a vision of a neighborhood built for and by the sons and daughters of South L.A. During his life, he moved from shadows into the bright hope of freedom and community revitalization.”

LA mayor Eric Garcetti tweeted: “Our hearts are with the loved ones of Nipsey Hussle and everyone touched by this awful tragedy. LA is hurt deeply each time a young life is lost to senseless gun violence. My Crisis Response Team is assisting the families coping with shock and grief.”

A host of musicians have also paid tribute to Hussle. See some tweets below.

Nipsey you a legend. I respect and admire your career path and what you did for the neighborhood. My heart broke today when I saw the news. I’m praying for your loved ones. This was sposed to be the year we got one in. God had bigger plans for you 🙏🏿

RIP Nipsey. I just spent Thursday with him filming a video for a beautiful new song we created with Khaled. We filmed in Inglewood, close to where he grew up. He was so gifted, so proud of his home, so invested in his community. Utterly stunned that he's gone so soon.

This doesn’t make any sense! My spirit is shaken by this! Dear God may His spirit Rest In Peace and May You grant divine comfort to all his loved ones! 💔🙏🏿
I’m so sorry this happened to you @nipseyhussle pic.twitter.com/rKZ2agxm2a