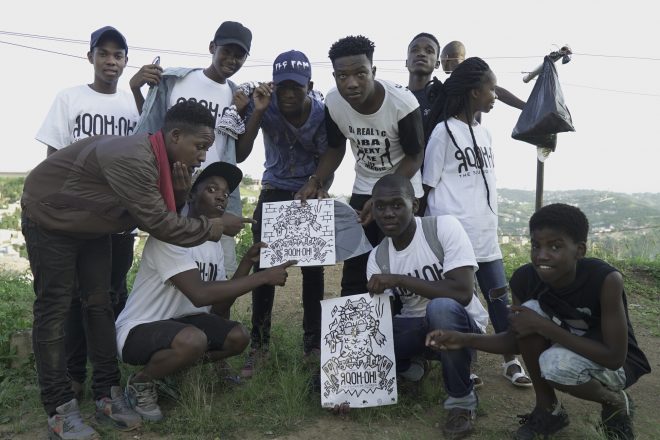 Gqom is the simmering sound straight from the streets of South Africa. A cutting-edge movement, now making its way around the globe and over the airwaves thanks to characteristically budget, broken beat vibes and raw, funky energy.

Gqom Oh!, the label at the heart of the action, gained vast critical success with their ‘The Sound of Durban Volume 1’ compilation and additional releases. Their latest drop is expected this month, welcoming 23-piece Durban collective TLC Fam to the crew.

From the township of Newlands West, all 23 members play their part on the ‘Isbethelo seGqom’ LP, (translating to ‘The Gqom Hit’ in Zulu). From DJ-ing, to producing, to dancing and MC-ing, the group, formed in 2011, represent a strong, powerful Zulu sound culture through their lyrics and even their song titles.

Psychedelic hardcore gqom is now a staple of the label, but as evident on the track we’re premiering today, ‘Tribute to Nomfundo’ (Ladlal’iDark), the unique branch of the already experimental gqom produced by TLC Fam is highly personal. Their signature multi-layered hard kick, appropriately named ‘Taxi Kick’, is the result of a Fruity Loops technique made specifically for taxis in the townships.

‘Tribute to Nomfundo’ is loud, pacey and powerful. Sparse in parts, it remains undeniably danceable throughout, with focus on sharp production and stripped back vocals. We’re sure you’ll be hearing this on the dancefloor this summer.

‘Isbethelo seGqom’ LP is due June 19 on Gqom Oh! Pre-order it here and give ‘Tribute to Nomfundo’ (Ladlal’iDark) a listen below.