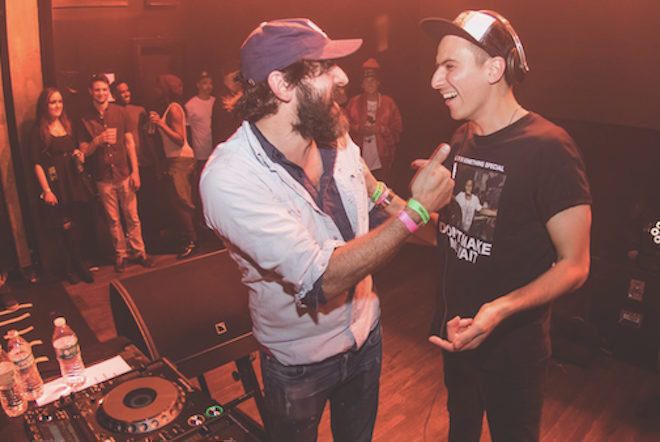 It's a rare occurrence when two genre icons join forces. But Boys Noize and Mr. Oizo fall definitively under that category of artist super duos, coming together as the titan electro collaboration Handbraekes.

The side project hasn't shown its face since 2014's 'Handbraekes #2' with a small selection of tantalising tweets giving clues to upcoming work. For the past two years, fans have been waiting eagerly for any sign of the two returning.

Now, Boys Noize and Mr. Oizo give Mixmag the first official re-emergence of their pairing with the premiere of a remix of Boys Noize banger 'Midnight' from his recent album 'Mayday'.

Boys Noize is currently on a monstrous North American tour showing off a new live show following the release of the LP. He needs little introduction as one of the most celebrated electro stars of the past decade, known for his signature loudness and refusal to conform.

Mr. Oizo, the ever illusive Parisian who has become synonymous with the Ed Banger name, specialises in uniquely jarring work only a true mad scientist could conduct. His ventures with Justice and Daft Punk are only part of his canon, with uber abstract film productions as a writer and director under his given name, Quentin Dupieux, also earning him a cult following. His latest LP, 'All Wet', had collaborators Siriusmo, Peaches and Charlie XCX, offering 15 wonderfully weird tracks and a peculiar music video with Flying Lotus portraying Skrillex.

The Handbraekes edit of 'Midnight' is all that one would expect from such a team and may very well be the primer to the long-awaited 'Handbraekes #3'.

'Midnight' (Boys Noize & Mr. Oizo Handbraekes remix) is out on October 14 via Boysnoize Records as part of the 'Midnight' remix pack.


Boys Noize and Mr. Oizo both have performances in New York City this week at Music Hall of Williamsburg and Webster Hall, respectively.