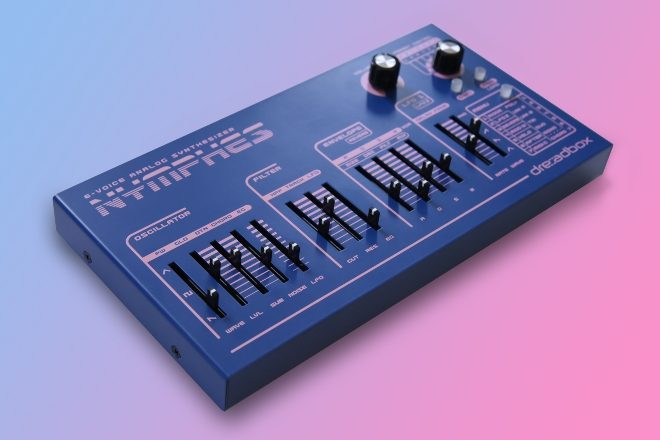 Synthesiser manufacturer Dreadbox has released a brand new six-voice analogue polysynth, Nymphes, branding it as a dedication to “all abused and oppressed women”.

“Each time you play a note on this synthesizer, imagine that you soothe their pain away and you will become a better human being and synth player,” said Dreadbox on the new polysynth.

The launch quickly picked up responses across social media - while some refused to believe it was real, others had a more critical reply.

“Hey @DreadboxFx, were there any women involved in the making or marketing of this synth?”, one user replied to the announcement on Twitter.

Another replied with an edited picture of a scientist holding the synth, with the caption: “Finally…gender equality”.

The Athens-based tech company will not be giving any proceeds from the sales of the new synth to charities supporting either abused or oppressed women. The Blessed Madonna also noticed the parodied announcement, replying “Wut.” on Twitter.

“May our voices unite and bring light, joy and happiness to this world of injustice and inequality. Smash the patriarchy,” said Dreadbox in a statement, who priced the polysynth at a massive €499.

Another Twitter user criticised the company’s low-effort sales pitch, saying: “As a nonbinary person with serious PTSD from a 10-year long abusive relationship... This is absolute bullshit. At the VERY least provide material support to charities doing actual work in this sort of area.”

As a nonbinary person with serious PTSD from a 10 year long abusive relationship... This is absolute bullshit. At the VERY least provide material support to charities doing actual work in this sort of areahttps://t.co/eyPnJmJWn4

Dreadbox’s creative director and co-founder, Dimitra Manthou, spoke to Resident Advisor about the launch of Nymphes. “We are taking advantage of Dreadbox's position to speak up for such matters,” she said.

Read this next: The harsh reality for women working in dance music

“The weird thing is that cis straight men are offended by my statement, where women, trans, abused men and women send me supportive messages and thank us for doing this. We cannot stand silent in front of any inequality and we are taking advantage of Dreadbox's position to speak up for such matters.”