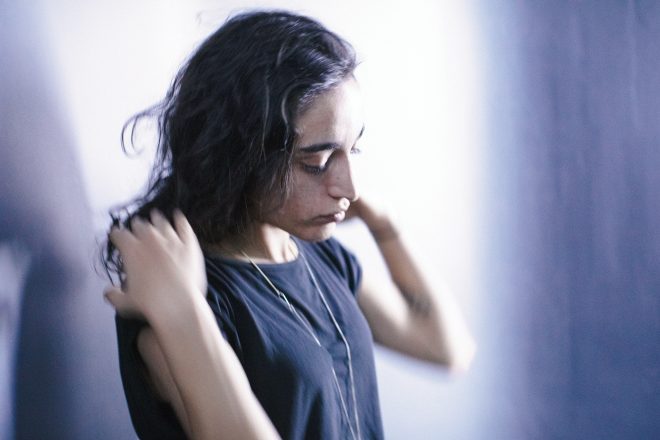 Palestinian DJ Sama’ Abdulhadi has been arrested along with several others for playing at an event at a historical site near the West Bank city of Jericho.

The DJ, who is one of the pioneers of electronic music in the Palestinian scene, was reportedly arrested on Sunday morning, after the event was held at the Nabi Musa site where Muslims believe the tomb of Prophet Moses lies.

The party itself did not take place inside the holy shrine, locals have said, but in a part of the building that hosts events such as weddings, birthdays, music and cultural events that have taken place there in the past.

Read this next: Get to know Sama'

Dozens of young Palestinians from Ramallah, Bethlehem and Jerusalem had attended the party on Saturday night, but were forced out of the site by mobs of people who were angered by the event.

On Sunday, video footage showed angry groups of people at Nabi Musa, which includes a mosque and a hostel for tourists, throwing furniture from the hostel into the courtyard before it was set on fire and destroyed outside.

The Palestinian Authority has ordered a full inquiry despite its own Ministry of Tourism allegedly giving the go-ahead for the party to take place. Abdulhadi’s father has also said that the event was given approval by the government. Mixmag has seen documentation that allegedly shows permission was granted for the event to take place. The party had been part of a wider project to film and document archaeological sites at several locations to promote Palestinian culture, according to Arabic music site Ma3azef.

Palestinian Prime Minister Mohammad Shtayyeh said that those responsible will be brought to justice, but has been criticised by many Palestinians over the government’s handling of the situation and despite the outcry, many Palestinians say that the Ministry of Tourism should be held responsible.

Mixmag spoke to an attendee of the event who wished to remain anonymous who said the Palestinian Authority is using Abdulhadi as a scapegoat.

“Angry people wouldn't accept this kind of party anywhere,” says the attendee. “What made this worse is a lot of lies [were] told about the nature of the event, claiming it was very immoral and a desecration of a holy place. What needed to happen immediately was for the PA ministry responsible to clearly state it gave a permit for the use of this historic/cultural site, rather than throwing Sama' under the bus to satisfy the public.”

Palestinians aged between 15-29 make up 30 per cent of the Palestinian population and many are already disfranchaised by the Israeli occupation and lack of opportunities that continue to hit young creatives, musicians and artists hard as a result, along with high unemployment rates, restriction of movement caused by the occupation and a lack of political representation for their demographic.

Read this next: Downtime Mix - Sama'

Although Palestinian security forces don’t exlusively target bars and nightlife, their use of force to search for drugs or to arrest people has been criticised before. Under the PA’s rule, strict drug laws are also enforced and any person caught in possession of cannabis can be arbitrarily detained, tortured and face prison.

In August 2018, witnesses claimed that an undercover drugs unit stormed bars and restaurants in Ramallah, to search and “forcibly extract them under the guise of law enforcement,” according to a report by the Media Line. Anonymous witnesses said people were dragged out of venues by the undercover police, where they were kicked and beaten as they were arrested.

Ali* whose name was changed to protect his identity was tortured and jailed for six months after police raided his house without a warrant. After finding a joint and a few grams of cannabis, he was repeatedly beaten and held for six months.

“They found a joint and a few grams and they took me to jail, there was a lot of beating, hanging, traumatic stuff…” says the 25-year-old. “I’m out now and with the pandemic, I really can’t get myself together, but I write a lot and make music. It’s my therapy.”

Palestinian mukhabarat (intelligence services) have also been known to raid house parties and small gatherings that take place in the privacy of people’s own homes.

“We were once hosting a birthday party - nothing big, just a group of friends having dinner and some good music in the background, like, what any normal young person does, and someone tipped off the mukhabarat that there was a drug-fuelled party full of prostitutes. Before we knew it, cops were at the door and some of them armed. They came into my apartment and started searching us like we’re criminals,” says a Ramallah-based musician who spoke to Mixmag anonymously.

At least 3,000 people have signed a petition calling for Abdulhadi’s release at the time of writing. The anonymous petition also says a judge has extended her detention without charge for another 15 days.

Mixmag reached out to the Palestinian Authority, but they did not comment. We are also awaiting an official statement from Sama's management