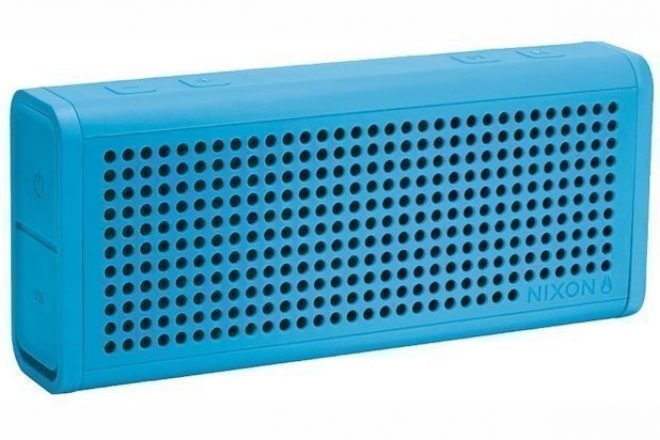 Much like Ted Baker, the Nixon Blaster sees another fashion brand making the jump to Audio accessories.

Vibrant and striking whichever colourway you go for, the Blaster is a fantastic looking speaker. The overall design is super clean; discreet LED's keep you informed and a rubberised feel adds to the Blaster's functional style. As well as looking good, the utilitarian design also hints at the Blaster's moisture and shock resistance - making it great for outdoor events. All switches on Nixon's speaker are enclosed in rubber, and both the Aux and USB connections are hidden by nifty rubber flaps - protecting its most vulnerable parts from the elements.

After holding down a button to pair via Bluetooth, the Nixon Blaster offers up good sound. The kick range particularly packs a punch, but there isn't a huge amount of low end, so if you're a fan of sub-heavy tracks you'll be left disappointed. In addition, at louder volumes, highs and mids can become strained and harsh, proving that this isn't one for hi-fi home listening.

It may not have the sound quality of the Jambox or the Sony SRS-X7, but where the Nixon's speaker really comes into its own is in a festival environment. The Blaster's £130 price tag gets you competent sound but superior protection from the elements, making it a great gadget to take with you where better sounding, but fragile speakers will fail. Throw in a massive 12 hours plus of battery life on a single charge, and the Nixon Blaster is a useful piece of outdoor, summer kit.