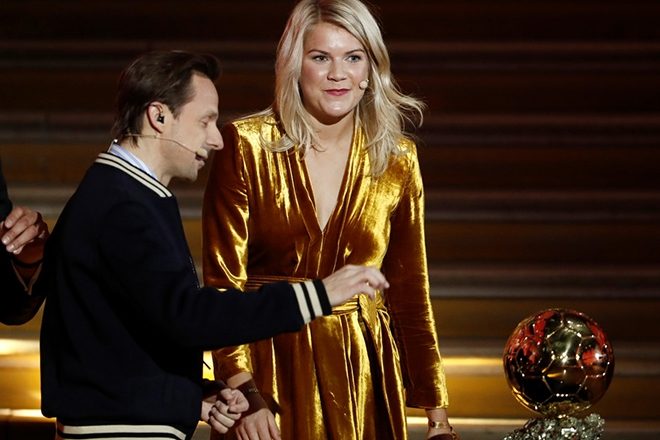 French artist Martin Solveig was invited to this year's annual football Ballon d'Or award ceremony as a guest host, but incited outrage when he ruined the awarding moment for Ada Hegerberg by asking her if she knew how to "twerk" while she was on stage.

The Norwegian winner made history by becoming the first to receive the honor of Ballon d'Or's inaugural title as the best female player in the world. She beat 14 other candidates. Throughout the award's 62-year-long history, only men have been acknowledged for the best player award.

Unfortunately, as she graced the stage to receive her award, Martin Solveig asked her if she knew how to "twerk" on stage, to which she quickly responded "no" and turned her back on him.

Reactions both in the room and online were quick to condemn Solveig's comment and express how shocking his behavior was, especially during such a monumental moment for Hegerberg's inaugural win.

Absolute trash: French DJ Martin Solveig asks Ada Hegerberg to twerk after receiving the first women's Ballon d'Or award. (Love her response, though.) This is the crap female athletes deal with on a daily basis around the world.pic.twitter.com/y2TLe3v4u9

Martin Solveig has already addressed the incident, sharing a video on Twitter expressing his "amazement" with what he had been seeing in reactions online. "I, of course, didn't want to offend anyone," he continues. "This comes from a distortion of my English level and English culture level, which obviously is not enough, because I didn't mean to offend anyone and I didn't know that this would be seen as such an offense. Especially if you don't see the whole sequence in total when we ended up dancing on Frank Sinatra - Ada and myself. This was a joke... probably a bad one."

Sincere apologies to the one I may have offended. My point was : I don’t invite women to twerk but dance on a Sinatra song. Watch the full sequence People who have followed me for 20 years know how respectful I am especially with women pic.twitter.com/pnZX8qvl4R

I explained to @AdaStolsmo the buzz and she told me she understood it was a joke. Nevertheless my apologies to anyone who may have been offended. Most importantly congratulations to Ada pic.twitter.com/DATdg0TfQk

Martin Solveig went on to release a second statement the following day, December 4, via Twitter to publicly apologize and add context to the incident.

Read the full statement below.

Read about 15 ways to combat sexism and harassment in dance music.