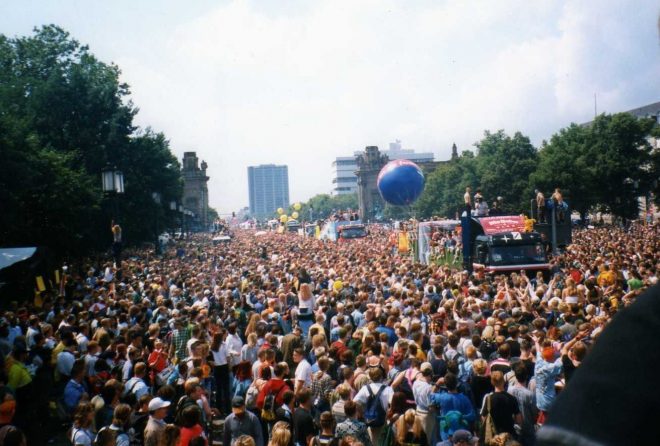 From the creators of Berlin’s Love Parade (pictured), Rave The Planet was set to go ahead for the first time this year. Inevitably cancelled due to the ongoing pandemic, TikTok has teamed up with the new event for a ‘fundraver’ live stream.

The fundraiser will air exclusively on TikTok on Saturday, July 10, with an aim to raise money for next year’s edition of Rave The Planet.

‘FundRaver LIVE’ is a six-hour livestream seeing in six DJs from around Germany who are closely affiliated with Love Parade, including Dr. Motte.

Read this next: Berlin will host a new version of Love Parade in 2022

Love Parade was created by the Berlin-based DJ in 1989 after the fall of the Berlin Wall. Rave The Planet was based on the same vision as Love Parade, but with an extra effort to engage with sustainability, cultural heritage, and self-expression.

The creators of the new event stated, “Rave The Planet is a non-profit organisation dedicated to the spirit and culture of electronic music.

“Our initiators are artists, ravers, entrepreneurs - including the inventor of the Love Parade, Dr. Motte. With our work, we want to make a sustainable, positive impact on techno culture.”

Also on the line-up, Ann Clue will take to the decks alongside Klanglos, Mark Dekoda, Stella Bossi, and Nakadia.

Read this next: Love Parade '92: the sound of the family

The Rave The Planet Parade was initially supposed to go ahead on the same date, but was postponed until 2022 following continuing lockdown restrictions in Berlin.

The livestream starts at 4:PM CET on TikTok via Rave The Planet’s page, live from Berlin. Donations for Rave The Planet Parade 2022 will be accepted through the platform - catch the stream here.