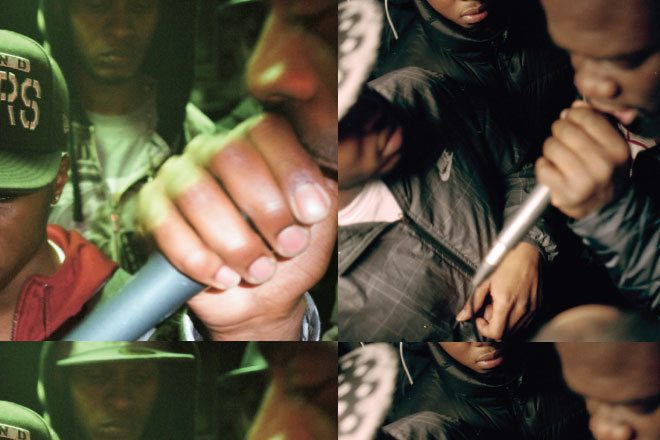 It's approaching 11pm on a Saturday night, pitch black, and I'm standing outside the entrance to what looks like a garage in an industrial estate somewhere in Enfield. Eventually DJ Tiatsim opens the door and leads me up to a poky room where grime riddims are blasting and an industrial-strength fan is vainly attempting to clear the air of smoke.

This humble setting is where Tiatsim hosts his Mode FM radio show every Friday from 11pm-1am, one of a number of pirate radio shows that have enjoyed a resurgence of interest over the last year. These days, though, rather than a crackly FM dial, Tiatsim's sets are enjoyed by listeners either online or via Mode FM's mobile app.

"In a sense it's not pirate radio," he tells me. "The spirit of pirate radio has come back through stations like Mode FM, Flex FM and Radar Radio, but at the same time it's not like it was." Tiatsim has been DJing on pirate radio for 12 years now, starting off by broadcasting on FM airwaves before moving to online radio. "The mobile app is really handy for what we do," he tells me; "it makes it way more accessible, you've also got the Tunein app, you can get pretty much any station on there."

In 2006 Ofcom research found that 24% of all adults in the boroughs of Hackney, Haringey and Lambeth listened to pirate radio stations, as well as 37% of students and 41% of the African-Caribbean population. It was vital to the development of UK-based genres such as drum 'n' bass, jungle, dubstep and grime.

But then the Wireless Telegraphy Act 2006 allowed Ofcom to take action against pirate radio stations, including forcing entry and seizure
of equipment. In 2005, Rinse FM's DJ Slimzee had even been given an ASBO, thought to be the first of its kind, which banned him from any rooftop in Tower Hamlets, where Rinse had been broadcasting from at the time. Pirate radio become a more difficult, risky and generally less viable option and public interest fell.

DJ Spooky, who hosts a Monday night radio show on Déjà vu FM, believes this was around the time when pirate radio DJs began switching to online broadcasting. "The FM thing was dying around 2007, 2008 because you had Ofcom locking off
all the stations," he tells me. "There might've been one or two left but, from 2008 to 2009 everything was going the way of the internet. Axe FM were the first guys to make sure you could lock into and stream footage live."

Tiatsim enjoys the freedom which comes with online broadcasting. "Back when it was totally pirate you'd spend half the time shitting yourself, hoping the DTI [Department of Trade and Industry] didn't come in and take all the records and equipment," he says. "In that sense it's completely changed now; you can relax and do your thing."

Since the switch to online, public interest has grown again and pirate radio is quickly becoming a vital outlet for new DJs, MCs and producers. DJ Tiatsim's work on Mode FM was recently recognised by former Rinse and Kiss FM DJ Logan Sama, who invited him to curate a DJ stream, along with a few MCs who regularly feature on his Mode FM show.

One of these MCs, Jammz, is known in the grime scene for turning up on anything up to six radio sets a week. He believes that pirate radio is like a dojo for MCs learning their art. "Pirate radio is the place where you spit your first lyrics and you keep match fit," he tells me, "it's helped form the scene. Without radio I wouldn't have met half the people I know now".

Spooky agrees. "Some artists have come through on YouTube, but most have come from pirate radio," he says. "If you're not radio-savvy, how do you expect to go to dances or raves and be sharp?"

Back in Enfield Tiatsim's show is broadcasting live; meanwhile, half the grime scene is over in Hackney at the 18th birthday rave of Novelist, another prodigious grime talent who cut his teeth on pirate radio. It's business as usual at Mode FM, though, with MCs Koder and Ghostly hosting the set. As important as those big nights and big raves are, the real roots of the scene are right here, DJs like Spooky and Tiatsim providing a platform for new artists as well as a vital link between more established acts and their original fans. What's more, it seems that more and more people are remembering why they loved pirate radio in the first place.