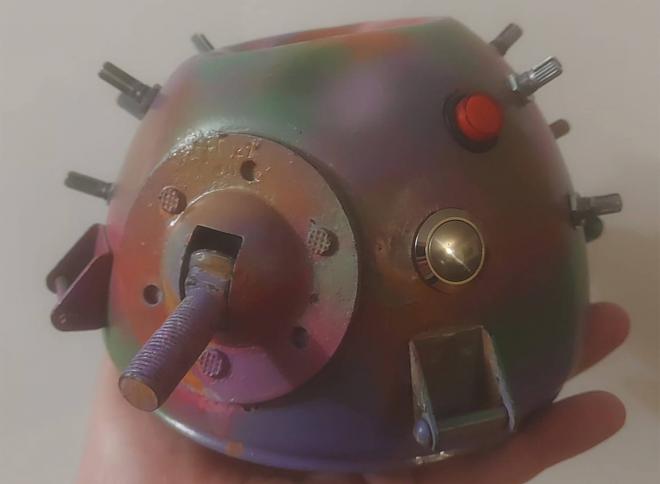 The synth, named ‘Psychedelic Soldier’ by its creator, was taken from the tank destroyed by a Javelin missile near Kyiv. At the time, Drozd was providing humanitarian aid in a nearby village.

The musician uploaded a video of the salvaged synth in action via CDM, putting the piece of equipment to the test through multiple channels.

“I started to build synthesizers four years ago. I have noticed that synthesizer collectors and musicians are often attracted not by how the instrument sounds, but by its appearance and unique ways of controlling it,” Drozd told CDM.

Elsewhere, the musician runs a DIY-focused Telegram channel named Synth Ethic, with a bio translating roughly to: “‘Youthful Techniques’ for lovers of strange devices and noise music. Build your dream noise box and spread audio terror to those around you.”

Drozd told CDM that with the outbreak of war in Ukraine, he imagined reusing and reimagining military equipment as synthesisers. “First of all, I was interested in tubes from rocket-propelled grenades,” he said.

“But now it is unrealistic to get them, although the soldiers promised me a couple, as well as enclosures of anti-personnel mines (you can make cool guitar pedals out of them).

“An interesting fact is that radio amateurs in Kyiv collect boxes of bullets. It is very convenient to place your electronic projects in them.”

Read this next: Kyiv producer John Object on fighting for Ukraine

Leaving those grand plans for "better times”, Drozd said he went on to deliver humanitarian aid where needed in areas where a lot of destroyed vehicles can be found.

“I decided to collect some trophies that could be used in the construction of synths. For example, I found an AK cartridge, which was hit by a bullet that stuck in it, machine-gun belts, and large DShK cartridges,” he said.