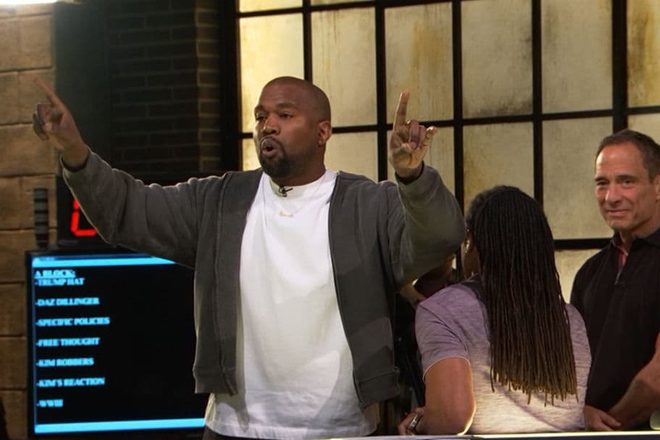 Kanye West continues to whip up a storm of controversy.

During an interview in the TMZ newsroom, he suggested the 400 year enslavement of black Africans in America was “a choice”.

"When you hear about slavery for 400 years - for 400 years? That sounds like a choice,” he said, adding: “We’re mentally imprisoned.”

West questioned the room “Do you feel that I’m thinking free?”, leading to TMZ employee Van Lathan confronting West over the comment.

Lathan said: “I think what you’re doing now is the absence of thought.

“Kanye, you’re entitled to your opinion, you're entitled to believe whatever you want, but there is fact and real-world, real-life consequence behind everything that you just said.

“While you are making music and being an artist and living the life that you’ve earned by being a genius, the rest of us in society have to deal with these threats to our lives. We have to deal with the marginalization that has come from the 400 years of slavery that you said for our people was a choice.

“Frankly, I’m disappointed, I'm appalled, and brother I am unbelievably hurt by the fact that you have morphed into something to me that isn't real."

Kanye West stirs up the TMZ newsroom over TRUMP, SLAVERY and FREE THOUGHT. There's A LOT more that went down ... and the fireworks are exploding on @TMZLive today. Check your local listings for show times. pic.twitter.com/jwVsJCMPiq

Kanye has since defend himself on Twitter, writing: “Of course I know that slaves did not get shackled and put on a boat by free will”. He also labelled the interview as “awesome”.

to make myself clear. Of course I know that slaves did not get shackled and put on a boat by free will

the universe has a plan. I knew that TMZ would be awesome.

Beyond the TMZ newsroom, Kanye’s comments have been criticised by many public figures on Twitter.

Kanye is honestly dangerous. those of us who know better know he's wrong, but so much of his audience doesn't and they blindly follow him. he reminds me of his "brother." https://t.co/VrT41UABsl

Haven’t watched the whole Kanye event today, working my way up to it. I will say, that a milder version of the “slavery is a choice” argument is made by uninformed people all the time. I’ve had young men in my courses say “they never would have enslaved me.”

There has NEVER been a moment in history when Black people didn't resist slavery. Some did it by jumping off ships. Some killed masters. Some ran away. Some did it through everyday forms of resistance. Slave masters didn't retire. Our resistance led to our freedom.

Kanye’s rhetoric continues to fuel the racist right-wing folks who believe that black people are responsible for their oppression.