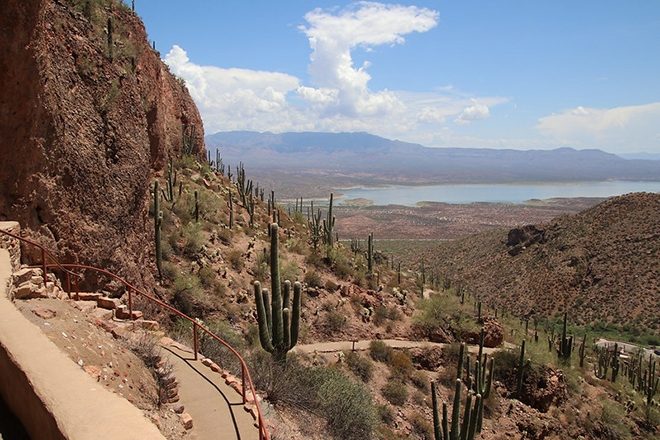 The large-scale event saw partygoers and campers ilegally cordon off areas of the main road, which according to officials caused a number of traffic violations and an emergency medical evacuation.

Features of the party included illegal fireworks and a shooting range, with crimes reported including speeding, DUIs, blocked roadways and double-riding.

The medical evacuation by helicopter was required after two quad bikes crashed and medics were unable to reach the injured person due to blocked roadways.

Susan Blake, a Tonto national forest spokesperson, said children were riding without helmets for protection: “This is an OHV [off-highway vehicle] area to begin with,” said Blake. “But I think the real issue here is the large crowds”

Read this next: Raising Arizona: How HOCO Fest is nurturing a cultural oasis in the desert

The party was unexpectedly discovered on April 3 by forest protection officers who were patrolling the Lower Sycamore Creek recreation area of the forest.

“That many people engaged in those types of activities in one area – it’s going to be super destructive,” said Sandy Bahr, who serves as director of the Sierra Club Grand Canyon Chapter to Arizona news site KPHO.

Scott Garlid, executive director of the Arizona Wildlife Federation, said toe organisation supports off-roading to KPHO, noting: “It’s something that a lot of Arizonans enjoy.” He added: “But when you get that many people in one place, you’re doing it to the detriment of other people who want to enjoy it and of course the wildlife itself.”