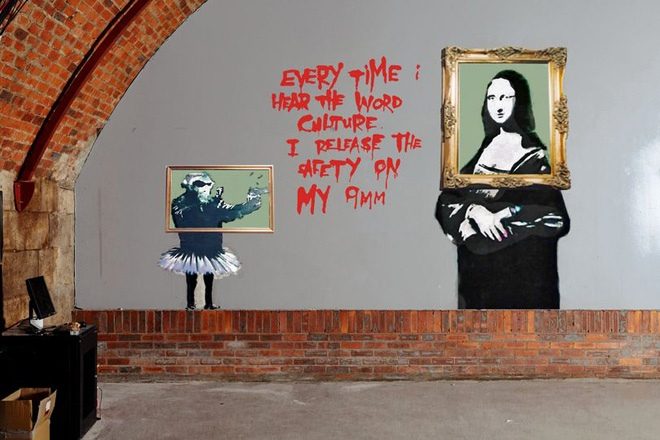 Banksy works that the artist did at The Arches nightclub in Glasgow are being restored after accidentally being covered over by grey emulsion in 2007.

The piece was part of his Peace is Tough exhibition in 2001. It's made up of three elements: a tutu-wearing monkey who is brandishing a gun at the Mona Lisa with the words between them reading 'Every time I hear the word culture, I release the safety on my 9mm.'

Restoration duties have been undertaken by Argyle Street Arches in tandem with London located organisation Fine Art Restoration Co (FARCO). Restoration is hoped to be completed by December, with FARCO removing the grey paint from the wall to reveal the artwork beneath.

He adedd: “We’re bringing three hidden Banksy pieces back to life. In order to do this, we need donations.”

It comes after it was feared last year that financial problems surrounding the club’s closure would see the artworks lost forever.

The Arches was shut down after the death of 17-year-old Regane MacColl in 2014 led to a curfew being imposed by Glasgow’s City Council.