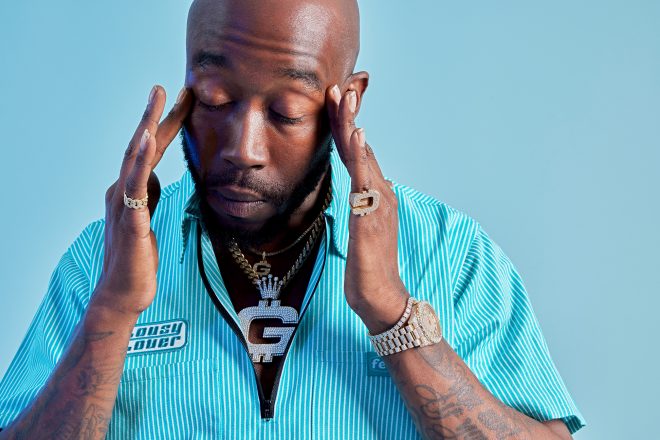 Speaking in his Mixmag cover feature with Nicolas-Tyrell Scott, Freddie Gibbs revealed an all-star production line-up he is working with on his upcoming album ‘SSS’.

The Indiana-hailing rapper claimed “It’s another album of the year," adding: "I’m about to go and work with Pharrell next week. Madlib, Working On Dying, The Alchemist, Sevn Thomas, Hit-Boy, I just talked to [Mike Will Made It].”

He also said: “It’s gonna be the best produced album that I ever made,” but wouldn’t yet be drawn on what its title ‘SSS’ means.

Gibbs’ most recent album ‘Alfredo’, made in collaboration with The Alchemist, was nominated for the GRAMMY Award for Best Rap Album, narrowly missing out to rap great Nas.

He added: “If anything it just shows how great I am to lose to such an MC. I could’ve lost to Macklemore or something,” joking about the controversial 2014 victory for Macklemore & Ryan Lewis’ ‘The Heist’, which beat competition from Drake’s ‘Nothing Was the Same’, Jay-Z’s ‘Magna Carta Holy Grail’, Kanye West’s ‘Yeezus’ and, most controversially, Kendrick Lamar’s ‘Good Kid, M.A.A.D City’.

Other topics Gibbs discussed included his work with Madlib as MadGibbs, with the rapper stating: “I think I’m the ever to rap on a Madlib beat”.

Madlib famously worked with the late MF DOOM on the legendary Madvillain project, with Gibbs referencing how their work inspired him to be better.

“Rest in peace to MF DOOM. I feel like he gave me the measuring stick. He set the tone. When I was making 'Piñata', everyone was talking about how he did the best shit and you know the competitor in me wanted to make the better album,” he said.

Read this next: MF DOOM nearly completed a 'Madvillainy' sequel before his death

Read this next: Madlib: "If I didn't do magic mushrooms, I'd probably just be doing hip hop"