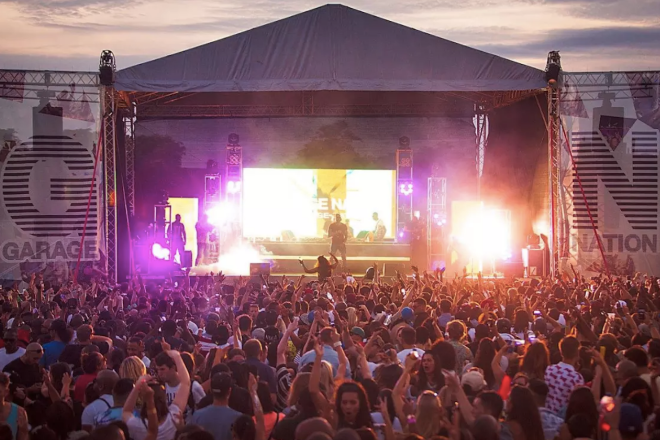 Four men were rushed to the hospital after a fight broke out at Garage Nation music festival in east London this weekend.

According to BBC News, The Metropolitan Police believe all four men were stabbed during a fight that broke out in the VIP area at the festival. All have "stab and slash" wounds. One of the victims has serious injuries that could be "life-changing", while the others have less serious injuries and are not currently in hospital care.

A 21-year-old attendee named Mel Dee witnessed some of the fight as she was on her way to one of the bars at the festival, which hosted 100 artists focusing on the genres of garage, house and r'n'b. She says she saw one of the victims get slashed in the back:

"We saw him go towards someone in quite an aggressive manner. Then he jolted back. They had slit his back, slashed him. It was very deep, he was fuming. All of a sudden he ran towards whoever else it was and soon there were 15 of them. Other knives were pulled out. I could see people punching - arms flying everywhere. We ran as far away as we could."

According to Mel Dee, the security at Garage Nation was "dreadful" and the check to get in was lacking:

"They had a lack of security on the gate to get people through. They said, 'Can we check your bag?' and they got us to unzip our bags but they didn't search properly before letting us through. Other festivals I've been to are much more strict."

Garage Nation's spokesperson made a statement to BBC News: "We run a strict four-stage policy search regime. The security was procured and agreed in line with the planning that has been ongoing for 12 months."

No arrests have been made, but Garage Nation is assisting in the ongoing investigation.

Last week a 25-year-old British man was arrested on suspicion of murder in relation to a stabbing that took place during the 2018 Hideout Festival in Croatia. One man was killed during a fight that took place on the Croatian island of Pag at the Kalypso club.