Exclusive: Underworld's new collab with Ø [Phase] is some of their most daring work to date - Music - Mixmag
Home Latest News Menu 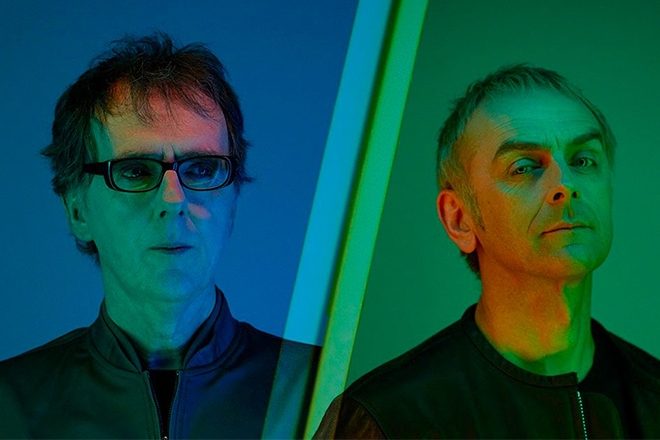 Ahead of their highly anticipated 'DRIFT SONGS' LP which is set to arrive this October, UK dance music giants Rick Smith and Karl Hyde aka Underworld have linked up once again with their friend Ø [Phase] to present 'Border Country'.

The track marks the final part of DRIFT Episode 4 as part of the group's ambitious DRIFT series - an ongoing, fifty-two-week experiment where they publish new material every week of the year.

'Border Country' is the second collaboration with Londoner and DRIFT community member Ø [Phase]. Lithe and restless, it edges and darts through unmapped spaces into a place where grimy nocturnal electronics are driven hard by fizzing hi-hats and multiple voices rebound in from the peripheries.

Rick: "My relationship with Ashley (AKA Ø [PHASE]) began in Autumn 2017 when I first heard his 'Submerged Metropolitan' release," Rick Smith tells Mixmag. It's not an exaggeration to say I immediately fell in love with his music. There was a sense of journey and mystery and magic to what I heard. Having worked with him for a little while we know, he brings that same magic to the table every time, informed by his deep passion and understanding of the lineage of techno and a thirst to learn and grow. A lovely talented man."

Ashley Burchett a.k.a. Ø [Phase]: "I got a message from my label manager sometime in late 2017 titled 'contact re Underworld', says Ashley Burchett (AKA Ø [Phase]) when speaking on the collaboration. Apparently, the guys were keen to meet to 'talk about some ideas'. Within just a few weeks of our first meeting, we were in Rick's studio drinking tea, talking together and working on ideas. 'Border Country' came into being gradually, like a photograph coming softly into focus before sharpening into a crisp image, maturing into its final form."

Karl: “We’ve been performing Border Country live since November 2018 and though it had never been released we’ve seen how it instantly connects with audiences everywhere we play.”

Underworld is currently on the road for one of their biggest European tours to date which will conclude with three massive arena shows in Antwerp, Amsterdam and London's Wembley Arena in December.

Listen to Mixmag's premiere of 'Border Country' and check out Underworld's tour dates below.