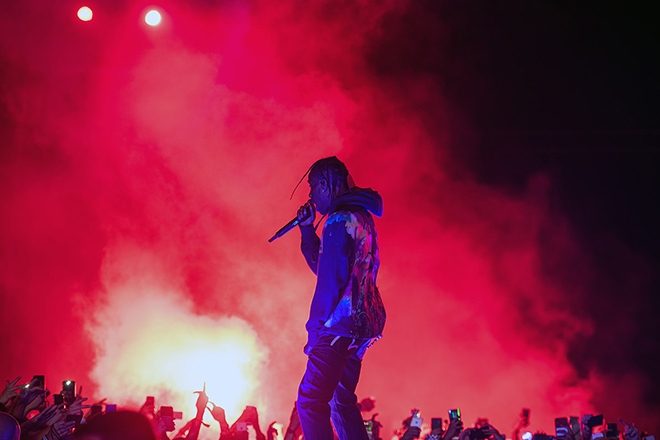 Eight people have died and many more have been injured in a crowd crush at the opening night of Astroworld Festival (November 5).

The third edition of the festival, founded by Travis Scott, was taking place in the rapper's hometown of Houston, Texas.

50,000 people attended the sold-out event, with the tragedy occurring around 9:40PM local time when the crowd became squeezed near the stage and panic broke out.

Cases of death are currently being examined by the medical examiner.

"The crowd began to compress toward the front of the stage, and people began to panic," reported Fire Chief Samuel Peña.

Houston Mayor Sylvester Turner appeared at a news conference on Saturday November 6, confirming that there was a "very, very active investigation" to find out how the crush happened, and it may go on "for quite some time."

Turner also revealed that of the eight people that have died one was just 14-years-old, one 16, two were 21, and another was 23.

11 people were hospitalised in cardiac arrest, and eight died. 300 people were treated for injuries with 17 transported to hospital, reportedly including a 10-year-old.

Travis Scott has released the following statement on Twitter.

It reads: “I’m absolutely devastated by what took place last night. My prayers go out to the families ad all those impacted by what happened at Astroworld Festival. Houston PD has my total support as they continue to look into the tragic loss of life."

The Houston Chronicle reports Travis Scott had halted performing multiple times during his 75-minute headline set after spotting distressed fans in the audience and calling upon security to check in on their wellbeing.

According to Mayor Sylvester Turner the crush first began at around 9:40PM local time, but the music was not halted until 30 minutes later at 10:10PM.

Earlier in the evening, ABC13 reports a crowd of hundreds stormed and broke down the perimeter of Houston’s NRG park in a stampede, knocking down metal detectors and a security screening section of the entrance, causing chaos for security personnel.

As we were arriving to the Astroworld Festival at NRG Park right at 2:00, a stampede burst through the gates. Hundreds of people destroyed the VIP security entrance, bypassing the checkpoint. People were trampled. Some were detained.

(Excuse any language you may hear) pic.twitter.com/d0m2rjqAAk

"Nobody could dream of this," said Houston Police Department Chief Troy Finner. "But we're here, and I think it's very important that none of us speculate. Nobody has all the answers tonight.

367 police officers and 241 security officers on duty throughout the festival.

Local politician Lina Hidalgo, county judge of Harris County, said: "Our hearts are broken. People go to these events looking for a good time, a chance to unwind, to make memories - it's not the kind of event you go to where you expect to find out about fatalities."

Hildago later suggested that plans for the festival created by organisers Live Nation "may have been inadequate."

“What I know so far is that Live Nation and Astroworld put together plans for this event: a security plan, a site plan; that they were at the table with City of Houston and Harris County...

“The families of those who died, and everybody affected, deserve answers as to what took place last night, and that’s why I’m calling for an objective, independent investigation as to what went on and how it could have been prevented."

“Our hearts are with the Astroworld Festival Family tonight—especially those we lost and their loved ones,” the festival wrote in a statement posted early this morning. “Thank you to our partners at the Houston Police Department, Fire Department, and NRG Park for their response and support.”

The second and final day of the festival has been cancelled.