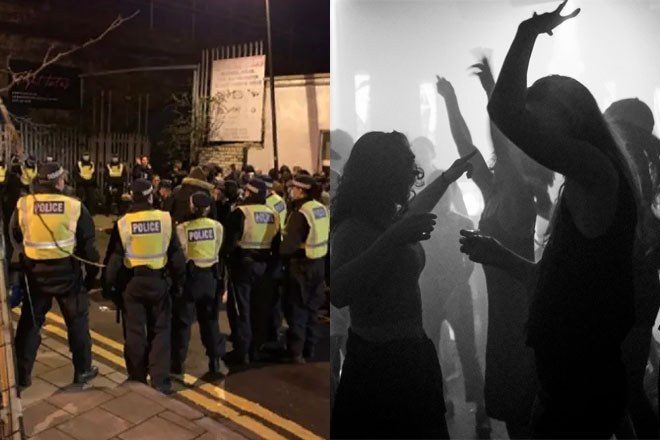 £15,000-worth of fines were handed out by police at a rave in East London at the weekend.

Police broke up a party in a railway arch in Hackney on Saturday night. It's estimated that 300 people were in attendance.

Sky reports that officers forced their way inside the venue and issued £200 fixed penalty notices to 78 people to the tune of £15,600.

Organisers of the party barricaded themselves outside while the police claim that revellers scaled fences in order to get away.

In a statement, Chief Superintendent Roy Smith said: "Officers were forced, yet again, to put their own health at risk to deal with a large group of incredibly selfish people who were tightly packed together in a confined space - providing an ideal opportunity for this deadly virus to spread.

Read this next: People are breaking lockdown to attend illegal raves

"Our frontline officers continue to police this public health crisis with compassion and professionalism but it is completely unacceptable they have to face such needless risks to their own health and to their families too."

On the other side of town on Sunday, police broke up a 200-person party at a property in Knightsbridge, West London, handing out 30 fixed penalty notices. Police claim two officers were injured as revellers came out of the premises.

Lockdown raves have been taking place since last summer when it became clear that clubs and festivals would not reopen for the foreseeable.

Raves have continued to take place despite fines being introduced that are designed to persuade organisers and revellers to stay at home.

Illegal parties have flown in the face of lockdown rules with police across the UK seemingly playing cat and mouse with people who continue to party.