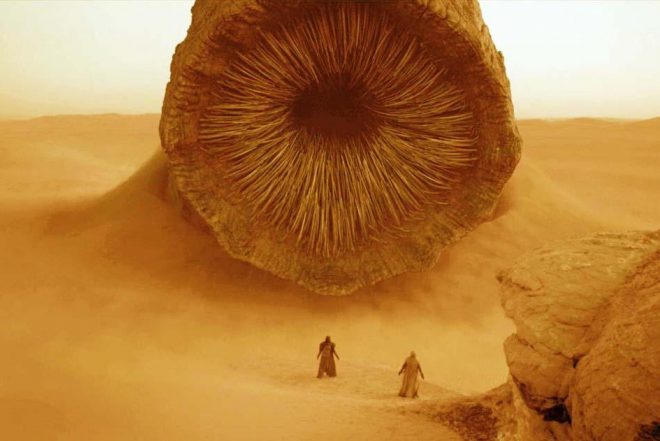 The sound made by the sandworm in the new movie Dune when it swallows a spice harvesting machine whole was made by a sound engineer sucking wind with a microphone in his mouth.

In a recent interview with Wired Magazine, Mark Mangini and Theo Green, sound engineers on the project, revealed how they produced and created the sandstorm and sandworm sounds used in the new Denis Villeneuve-directed remake.

The pair had worked with Villeneuve on Blade Runner 2049.

Read this next: New documentary gives in-depth look at the sound design of Blade Runner 2049


One of the most interesting techniques described by creative cast members was Mark Mangini putting a microphone in his mouth and sucked in a lot of air to recreate a swallowing sound.

This was the sound that is made when a sandworm, a massive creature that lives on the fictional planet Arrakis where the movie is set, swallows a whole spice harvester.

The result of this technique was a sparse sounding sound, one that was unlike the banging, harsher sounds used in other Hollywood movies through more conventional sound design techniques.

Read this next: Hans Zimmer to score the new 'Dune' adaptation


They explained how they intended for the movie to sound like "a documentary of the planet Arrakis," through using a technique called Fake Documentary Realism (FDR), and that they rejected other methods used in blockbuster films to recreate harsh or specific sounds.

The creatives said that they wanted to make audiences “feel like they live in a universe we recognise” - and that other methods of creating sound on other films were used as examples of what not to do.

Director Denis Villeneuve made it clear that he wanted the sandworms to seem more “god than Godzilla”, thus prompting for a less harsh and more precise sound for their actions. Villeneuve wanted the audience to be able to feel and sense the creature’s movements through the sound.

Villeneuve “was very keen on everything we heard feeling organic or acoustic.”


The sound team stayed true to the director’s creative vision by using unorthodox techniques to create realistic, precise sonics for the movie.

To maintain consistency in making the sandworms sound realistic - the team took hydrophones to California’s Death Valley and recorded sand moving. This was to make “fluttery” noises to signify the creature’s arrival, and to make them sound as sonar as possible- as Villeneuve wanted to defy monster movie stereotypes.

Dune, starring Timothée Chalamet and Zendaya, is now out in theatres. You can watch the trailer below.