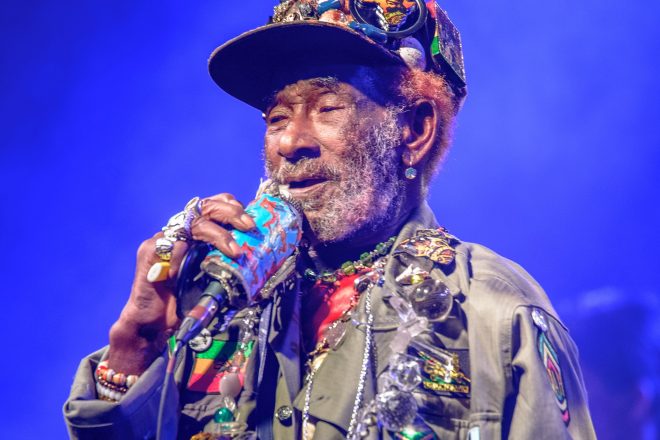 The Jamaica Observer shared the news that he passed away at the Noel Holmes Hospital in the coastal town of Lucea early on Sunday morning (August 29).

Famed for his work with reggae stars such as Bob Marley and The Wailers, Scratch was a key figure in popularising Jamaica's music all over the world. A pioneer of dub music in the 1970s, Scratch used early remixing and studio experimentation to transform roots reggae tracks, influencing the creation of multiple dance music genres.

Perry began his career selling records for Clement Coxone Dodd's sound system, developing a close relationship with the "Motown of Jamaica", Studio One records. In 1968 Perry established his own label, Upsetter Records and eventually formed the band The Upsetters.

In 1973 he built the "Black Ark" studio in the garden of his home in Kingston - a location that became a source of creative and spiritual inspiration for Perry, and a breeding ground of innovation for Jamaican music - with Bob Marley and The Wailers, Junior Byles, The Congos, Junior Murvin, Max Romeo, Mighty Diamonds, The Heptones, Augustus Pablo and Jah Lion all recording at the studio.

Scratch continued to develop the dub sound throughout his entire career, winning a Grammy award for best album ('Jamaican E.T') in 2003. Going on to work with Keith Richards, The Orb, The Clash and the Beastie Boys.

In an interview with Rolling Stone in 2010, Richards described Perry as the "Salvador Dali of music."

"He's a mystery. The world is his instrument. You just have to listen, he's more than a producer, he knows how to inspire the artist's soul."

A documentary about his life, narrated by director Benicio Del Toro, debuted in 2011 at SWSX film festival.

"Perry was a pioneer in the 1970s’ development of dub music with his early adoption of studio effects to create new instrumentals of existing reggae tracks."

"Undoubtedly, Lee Scratch Perry will always be remembered for his sterling contribution to the music fraternity. May his soul Rest In Peace."

Many in the music industry also took to social media to pay tribute to Scratch, The Prodigy tweeted: "Rest in peace king Perry, total rebel, pioneer, and inspiration, May ur bass shake systems and souls forever"

Close friend and collaborator Mad Professor described Perry as "Totally ageless! Extremely creative, with a memory as sharp as a tape machine" in a Facebook post.

"He guided me through the complicated reggae landscape, taught me how to balance a track to create hits… he knew it…I am happy to have learnt from him.."

US Rapper Lupe Fiasco tweeted: "AFRICAN BLOOD IS FLOWING THROUGH I VEINS SO I AND I SHALL NEVER FADE AWAY!!!!" alongside a picture of Scratch.