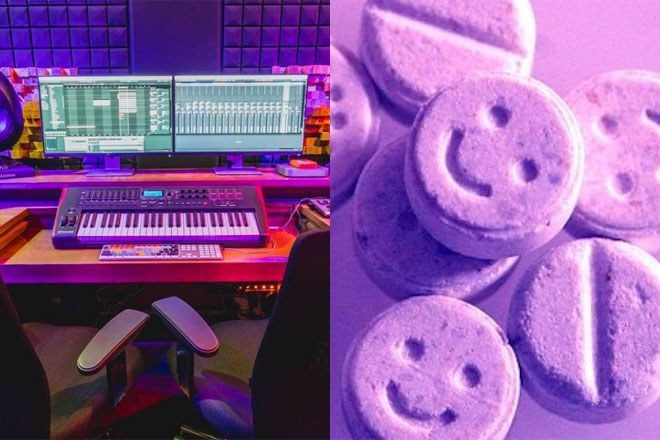 Posting to the platform this week, SeedEater-1o1 details the affect that caffeine, nicotine, cannabis, alcohol, LSD, magic mushrooms and amphetamine, taken in the form of prescription drug Adderall, have on them while producing beats.

The user has provided a description for each as well as a creativity score out of 10.

Nictone ("it’s nice to hit a vape while listening to the beats I've made throughout the day. But it’s really addictive and it only lasts for a few minutes") and alcohol ("I’ve only had a few experiences with producing while drunk and never really finished anything") score lowest on the creativity scale, with 3/10 and 1/10 respectively.

Magic mushrooms score highly thanks to the profound effect they have on SeedEater-1o1 but often result in them exploring nature rather than making music. Magic mushrooms make them "feel like a kid again, it doesn’t do anything for music production. I always end up going on a walk and enjoying nature while thinking about my life. I’m gonna give shrooms 9/10 because it makes me thankful for who I am and made me wanna start taking care of myself."

Marijuana can also lead to creative work being sidetracked but used in the right way can unlock a "creative zone": "If my tolerance is low then I’ll get too stoned and just end up watching a movie lol. But if I smoke daily then weed helps me relax and it gets me in this creative zone. I loved to smoke and drinking a cup of coffee while producing, it’s a nice combo. 8/10 because of the creativity boost."

SeedEater-1o1 ranks amphetamine second highest for creativity, mainly due to the productivity that it helped them achieve. However they warn people about how addictive it is and that using it can be "a very slippery road" and that "it makes the person using them rely on a substance to enjoy their passion."

Read this next: "Tripping revived me" Students are using LSD and magic mushrooms to get through lockdown

Given that scientists have been studying its potential to enhance creativity since the 1950s and that microdosing has become commonplace everywhere from Silicon Valley to the British suburbs, it's no surprise that LSD comes in highest in SeedEater-1o1's list, helping them enter what they call "the music dimension": "I take small amounts of [LSD] before I’m going in for a long session. This drug makes me enter what I call “the music dimension”. It’s a place where it’s just me and the music, no thoughts. It helps me break my old thought patterns and come up with new ideas and new ways to do stuff. On higher doses I’m not able to produce music, it’s more like a therapy session with myself. It has made me realize that everything is possible in life and we are all on this earth together, you can achieve anything with faith. This drug also helped me realize that I was an addict and I needed to get my life together. 10/10 because it probably saved my life and helped me to reach new levels of creativity in music production."

The user signs off by saying "take care of yourself no matter if you are using drugs or not. And remember that there is so much more to life than just making music."

The above is purely anecdotal and not part of a scientific test. For honest information about any of the substances mentioned in this article visit Talk To Frank.