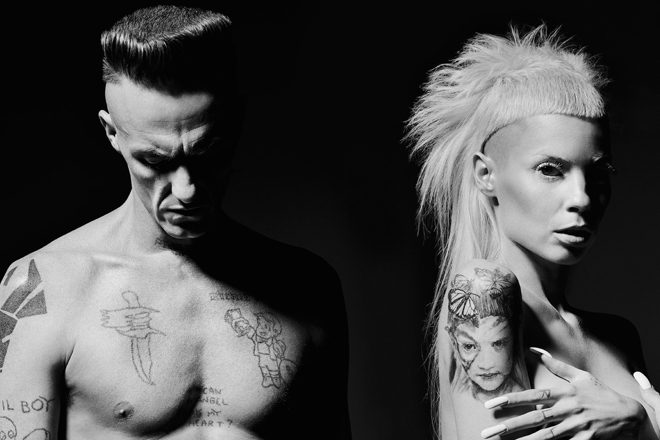 A video of Die Antwoord and members of their entourage attacking Hercules & Love Affair co-founder Andy Butler at Future Music Festival in Adelaide, Austraila, in 2012 has surfaced online.

It shows Die Antwoord member Ninja approaching Butler and spitting in his face, prompting Butler to throw a drink in retaliation. The situation then escalates into a violent altercation, in which Ninja and fellow Die Antwoord member Yolandi chase Butler after a scuffle. Yolandi can be heard shouting homophobic slurs as Butler runs away, saying: “Run faggot, run. Run for your life bitch.”

After Butler escapes, Ninja immediately invents a story about Butler sexually assaulting a young girl and tells his group that is “what went down” in order to cover themselves.

He says: “Now here’s the story guys: He walked up on this young girl and he felt her bum and her tits and she’s upset. Don’t laugh anymore.”

The pair soon run into more people and the story then becomes about Yolandi being assaulted. She starts crying as they tell the story. Afterwards, Ninja comments: “She’s like Marilyn Monroe, this is Oscar Award winning”. Yolandi later cracks a smile while feigning tears, and Ninja says: “We’re gonna have to edit that part out. Stop smiling Miss.”

Die Antwoord have been taken off the line-up for Louder Than Life festival in Kentucky and reportedly Life Is Beautiful in Las Vegas since the video surfaced, although neither festival has explicitly confirmed the video as the reason the act have been removed from the bill.

Ninja has since responded to the incident on Die Antworord’s Facebook page, claiming: “Ben has cleverly edited this video clip to make it seem like me and ¥o-landi commited a hate crime towards a person because they are gay. However Ben beat up the guy from Hercules himself while filming this same video clip.”

He also claims the incident was not a hate crime and “just a fight with someone who fucked with us.” He then makes further claims of harassment against Butler. See the full post below.

This incident is not the first time Die Antwoord have been embroiled in controversy. In 2012 Yolandi was criticised for painting on blackface for the video to ‘Fatty Boom Boom’.

A video released for the track by Zheani contains screenshots of private messages between her and Ninja. Watch it below.