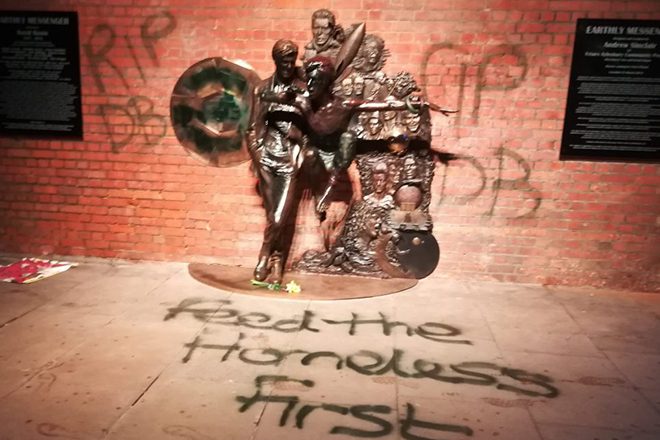 Over the weekend, a statue honoring the late David Bowie was unveiled in Aylesbury, a small town in Buckinghamshire in England, a poignant choice as it was where the icon first revealed his Ziggy Stardust persona in 1972.

Sadly, less than 48 hours after the unveiling of the first Bowie statue, the monument was vandalized with graffiti paint reading "feed the homeless first" and "RIP DB". The statue, surrounding wall and floor were vandalized.

The Bowie fan who commissioned £100,000 through a crowdfunding campaign for the statue named David Stopps explained in an interview that he does "quite a lot for the homeless, which is the irony of the whole thing". Additionally, the Mayor had previously confirmed that no public money was used in the making of the statue, which depicts a few of Bowie's famous personas.

In order to remove the graffiti, the man who created the bronze casting of the statue will return to blow torch the writing off the statue and re-wax it.