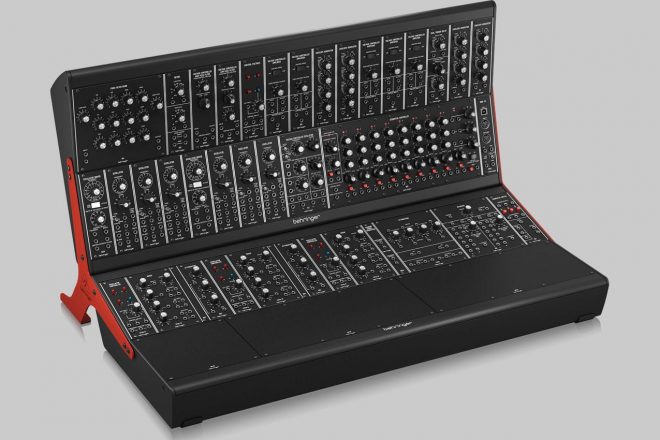 Three of Moog’s modular systems - Model 15, System 35 and System 55 - are being downsized into Eurorack versions.

Behringer responded to positive customer feedback on their 2020 released Eurorack modules, which were also based on Moog designs, and have now released downsized versions of their iconic products.

“After introducing our MODEL 55 range of Eurorack modules back last year, we've been following your comments and recognised your demand for pre-assembled systems,” Behringer stated.

Read this next: This book will teach you everything you've ever wanted to know about Moog semi-modular analog synths

The new systems come pre-assembled, and copy the format of Moog’s 5U format systems which were released in 1973.

Each system comes with a brand new MIDI-to-CV converter, while the System 55 comes with Eurorack Go brackets allowing two systems to be linked together.

In Behringer’s largest offering, the System 55 spreads across two cases and consists of some of Moog’s original designs, including seven 921B oscillators and the 960 Sequential Controller.

Meanwhile, the System 35 includes everything from the System 15, as well as 25 modules and five oscillators, two mixers, three envelope generators, and three VCA’s.

Read this next: Behringer shares details of BCR32 sequencer

The System 15 is the smallest of the Euroracks, but still includes everything from its original design. “The System 15 consists of the exact same 16 modules as the historic system,” Behringer said in an unveiling video. “And of course, the iconic fixed filter bank.”

Moog dropped limited edition remakes of their original systems back in 2015, which cost between £10,000 and £35,000. Each one came handmade and followed the 1970’s released archetype systems.

Check out Behringer's unveiling video below.