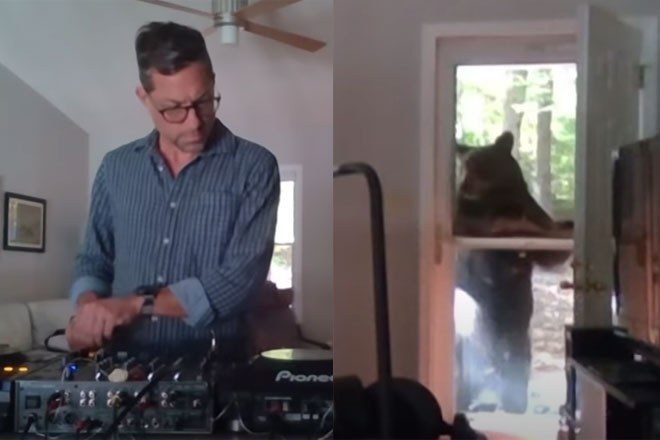 A bear interrupted a DJ during a recent livestream.

In what might be the best guestlist request of all time, North Carolina selector Jody Flemming was visited by a bear during a set he was streaming from home.

In the footage that Flemming caught on his camera during the stream, you can clearly see the bear approach his back door and then stand on its hind legs as if to say "big tune my selecta".

Unphased, Flemming simply walks toward the bear, snaps a pic before it shimmies off, and goes back to DJing.

The Asheville Citizen Times first picked up on the ridiculously cute but potentially stressful encounter.

“I just started playing and kind of got into the first track and I kept hearing this sound. I didn't really know what it was,” the 50 year old told the outlet.

“It was my neighbour in the street blowing their horn. That kind of alerted me that something was going on. And so I turned around — in the video it was really more backlit than it looks — and I just saw this figure. I thought it was maybe my neighbour coming to tell me my music was too loud. I got kind of halfway over and said, ‘Oh, there's a bear there.’”

Read this next: Prince's beloved white dove Divinity has died

While the sight of a bear would scare the living daylights out of your average Ibiza or Berlin DJ, Flemming's actually done a stint as a ranger in the Great Smoky Mountains National Park so is used to hanging around the animals.

“I've had a lot of bear encounters in the Smokies. I helped out with tranquilizing and moving bears, so I'm kind of familiar with what they're like,” he said.

Flemming also revealed the bear in question was a regular visitor to his yard – although this looks to be the first time it's turned up for one of his sets: "This particular one has been coming around lately, and we kind of just keep our distance and say ‘Hi.’ Whenever I saw him, I'd go out on the porch and watch him do his thing. I wish my neighbors hadn't blown the horn and it could have played out a little more,” he said. “I was hoping the bear would come back.”

The DJ grabbed the attention of the world's press when the video of the bear trying to enter his home nightclub went viral on Facebook.

If he makes any money from the video, Flemming has pledged to donate 20 per cent to a local zoo, the WNC Nature Center.