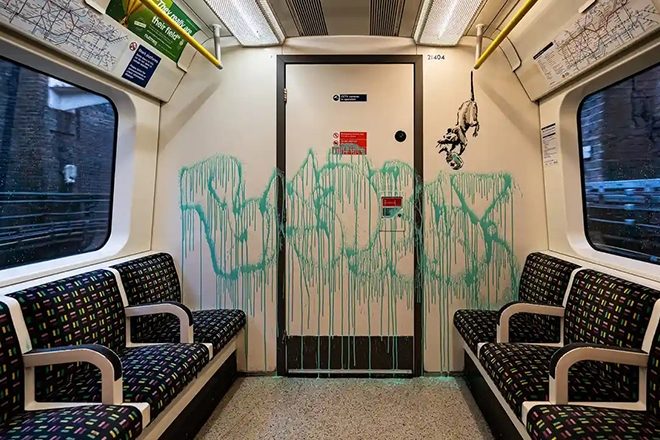 Banksy has published a video of his new artwork being created inside the carriage of a train in the London Underground.

The street artist's work makes commentary on the coronavirus pandemic, featuring his trademark rats sneezing, holding hand sanitiser and using masks as parachutes alongside the caption “If you don’t mask - you don’t get”.

The clip also references Chumbawumba’s 1997 track ‘Tubthumping’ with the track playing as the phrase “I get lockdown but I get up again” is revealed to be sprayed across a platform wall and tube door.

Goldie, who once hinted at who is behind Banksy’s secret identity in an interview (although was possibly joking around), commented on the post on Instagram, simply writing three 'Face with Tears of Joy' emojis.

Transport for London revealed that Banksy’s work has already been removed for violating its “strict anti-graffiti policy”, however the spokesperson expressed appreciation for the “the sentiment of encouraging people to wear face coverings" and offered Banksy “the chance to do a new version in a suitable location."

The UK government recently announced that wearing face masks will be compulsory in all shops in England from July 24.