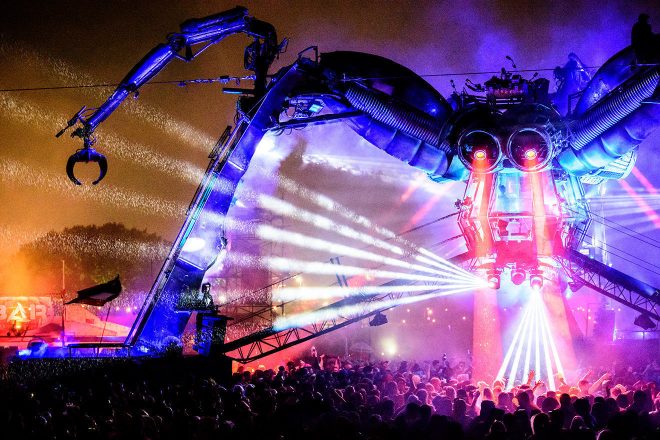 Running over the May Day Bank Holiday weekend, Arcadia's infamous spider stage is will be making it’s London debut.

For Arcadia’s 10th anniversary the biggest names in dance music have been bagged for the event, featuring sets from Sven Vӓth, Groove Armada, and Eats Everything.

Turning the Queen Elizabeth Olympic Park into the Upside Down, other huge names taking to the arachnid stage will be Rudimental, Noisia, and TQD, the DJ trio made up of Royal-T, DJ Q, and Flava D.

The Arcadia stage, which is made up of 50-tonnes worth of recycled metal, is coming to London in alignment with the Year of the Engineer and the event will also mark the 250th anniversary of Circus, the world’s first ever circus that was created near London’s Waterloo.

To mark both of these noteworthy anniversaries, the Arcadia stage has been developed to now have a 360o immersive concept, alongside it’s already impressive laser and fire combo.

The theme for this event has been significantly named Metamorphosis and will be the Arcadia’s biggest production show yet.

The Arcadia concept will also be featured later this the year at Ultra Music Festival in Miami, where the Ultra Resistance line-up will be taking over.

More artists are set to be announced nearer the time, together with even more production details.