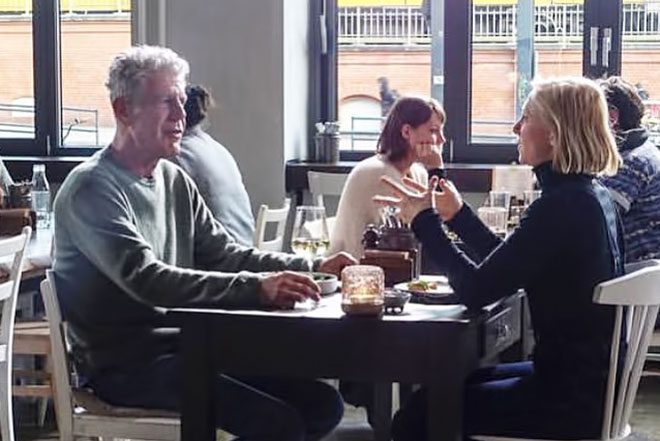 News of acclaimed television host, chef and articulate writer Anthony Bourdain's sudden death last Friday is still fresh on the minds of many. Bourdain, who was 61, was found in France where he was filming an episode for CNN's Parts Unknown.

The show, currently in its 11th season, aired its first episode since Bourdain's death earlier this week on CNN following a eulogy from anchorman Anderson Cooper, who called the host a "true original".

The season's sixth episode focuses on the illustrious city of Berlin, specifically highlighting the city's emphasis on creatives across artists and musicians. Besides being treated to a home-cooked meal by frontman of the rock band Brian Jones Massacre Anton Newcombe, Anthony Bourdain also sat with Berlin native, Ellen Allien for dinner at Michelberger.

Over a traditional, German meal (sausage, braised beef, horseradish, potatoes) Ellen speaks to Bourdain about the unique affordability Berlin offers creatives, making it a standout against other European destinations.

"I think after the second war, everything was burned here. There was nothing," Ellen shares. "Everything was gone, all the history. So, people start building up the new Berlin or whatever, and we are still in that process. And when you come here, you have the feeling that you have to help build something here. I am a part of it. If I go to Paris, I’m not thinking I’m a part of Paris because there is so much history ... but here, you have the feeling that you’re building something. I think that’s why so many people come here now."