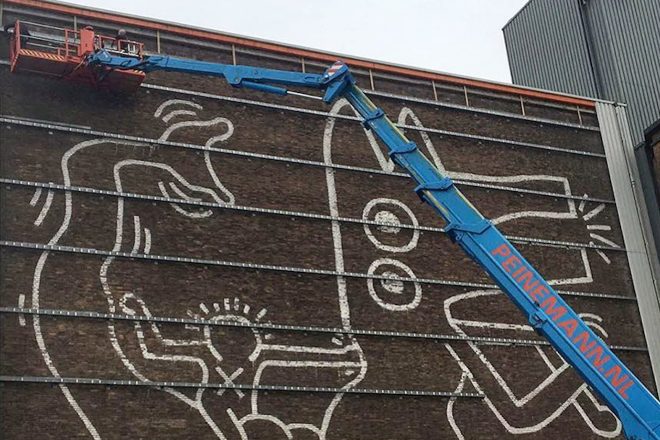 A giant mural by iconic NYC artist Keith Haring was recently uncovered in Amsterdam after being hidden for 32 years.

According to artnet, the 40-foot-tall mural was commissioned as the artist's gift to Amsterdam and was painted by Haring in 1986 while he was in town for a museum exhibition of his own work. The brick building was formerly known as the Stedelijk’s art storage depot.

The mural was covered just a few years after completion, when the side of the building had weatherboarding added to improve climate controls inside.

It wasn't until four years ago, when graffiti artist Mick La Rock uncovered an image of the mural and launched a campaign to uncover it. Now 32 years later the weatherboarding has been removed. Mick La Rock posted a video of the moment, which you can watch below.

For more on Keith Haring, view 26 photos of the street artist along with Basquiat, Warhol and more partying at legendary NYC nightclubs during the 1980s here.

In other art related news, a Banksy piece was stolen from an exhibition in Canada. Watch a video of the thief here

View photos and videos of the recently uncovered Keith Haring mural below.

It took 2 full days to take off the cladding but -wow- here it is: our Amsterdam Keith Haring (1986). The paint is in delicate state and needs restoration. The building, too. Let’s hope for the best as this project goes along! To all parties involved: THANK YOU! . #keithharing #keithharingmural #amsterdamkeithharing #mural #1986 #marktkwartier #foodcenteramsterdam #graffitiart #urbancontemporaryart #streetart