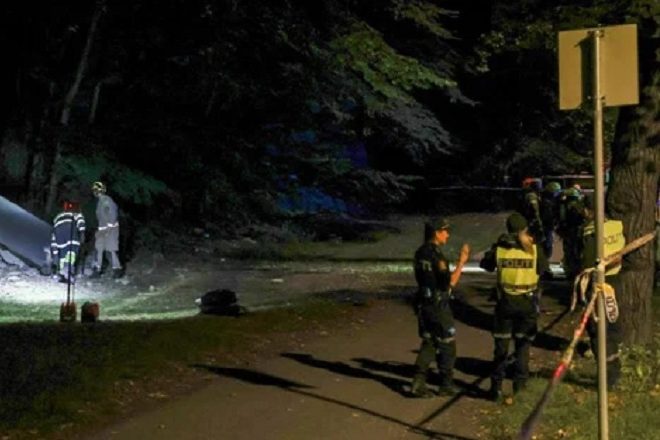 The toxic fumes are said to have come from portable diesel generators at the unlicensed event in the St Hanshaugen area of the Norwegian capital.

Around 200 people believed to be aged between 20 and 40 attended the event. Authorities discovered it by chance after a patrol group came across some confused young people near the bunker, before several more emerged requesting ambulances. A tip-off about the party had not been acted upon, and Oslo police are now investigating why not.

Two police officers who cared for partygoers were among those poisoned. Of the 25 hospitalised, three people were still being held for observation as of Monday but no person’s condition was said to be critical. Police have called for any other partygoers to seek medical attention if they experience nausea, headaches or dizziness.

The portable generators blamed for the leak were used to power the soundsystem and lighting in the 500 square metre bunker, which is 70 metres underground and only accessible by a single 1 square metre opening.

Carbon monoxide is an odourless and colourless gas produced when carbon-based fuels such as oil, gas, coal or wood are incompletely burned. It can cause suffocation and death as it displaces oxygen from red blood cells and stops the supply of oxygen to vital organs such as the heart and brain.

A 20-year-old woman who attended the event said to Norwegian broadcaster NRK: “We could have ended up with permanent injuries. A doctor called it a collective suicide attempt. It’s totally sick even to think about it.”

Oslo police inspector Emil Lorch-Falch said the bunker was broken into. Vidar Haukeland, head of Stiftelsen Diakonissehuset Lovisenberg, the company which owns the bunker, said the company does not feel responsible for the event, calling it a "serious break-in" to Norwegian newspaper VG.

A man who left before the police arrived said to NRK that other parties had been held in the bunker through this summer. He also spoke about how he had to leave multiple times for fresh air while in attendance, saying: "When you rave in a room without windows with 50 to 60 others, the air becomes heavy. I had to go out several times and breathe fresh air."

The Arftonbladet newspaper reports that the event was organised in secret on Facebook three weeks prior to it taking place, with guests told to arrive in small groups from 11pm on Saturday.

Rescue services arrived on the scene at 3:46am on Sunday morning after some of the confused young people found by a police patrol were able to lead them to the site.

Lars Magne Hovtun, of the city fire and rescue department, told VG: “We would have stopped this party immediately even if the airflow had been good. The risk of suffocation was just one of many things posing a life-threatening situation.”

Two people have been charged with trespassing and using the bunker without authorisation.