13 years ago, a beautiful, dazzling thing was born. Created in the wake of festivals being bigger than the sum of their parts and formed as an alternative for people who wanted an escape without the hassle of mass crowds and oversized yet underwhelming locations. Secret Garden Party was a movement for festival-goers who wanted something different, something unique and something to call their own.

The boutique, 1000-capacity festival was created in 2004 and is located in Abbots Ripton, a tiny spot just outside of Huntingdon. What began as a little rave with friends became one of the most well-loved, celebrated and frankly beautiful festivals in the UK. Last weekend, the final ever SGP took place and while that in itself is a hard pill to swallow, the four days that would follow were some of the best in the festival's illustrious, mischievous history.

With the line-up bigger, better and more boisterous than ever before, every stage host, tucked-away bar and 24-hour drinking space decided that if this was the last time we'd be partying in the Garden, we were going to do it fucking right. Hotspots like The Pagoda and The Drop played home to the likes of Jackmaster, Craig Richards, Peggy Gou, Soul Clap, Eats Everything, Jonas Rathsman and Archie Hamilton while The Great stage hosted Metronomy, Tom Misch and Crystal Fighters. 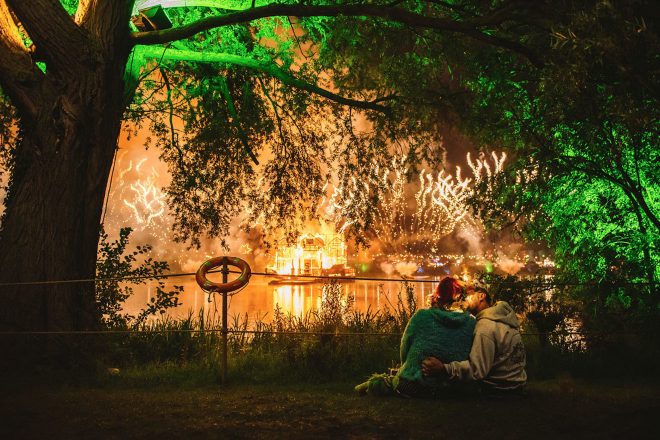 Of course, this is enough to cause most experienced dancers an extended bout of excitement but this year, as with most years at the festival, Secret Garden Party's real attraction lies in the little touches. Be that a walk through the sunflower field that's hidden behind a tiny door, or a stop at the open-air party palace that is the Palais De Boob, or even a trip down the winding route towards the Labyrinth where the set times and line-ups are more of a lucky dip than a dead cert.

As with any festival, the weather plays a huge part in anyone's experience and after the wash-out of 2015 (christ, it was a biblical offering of rain) we couldn't help but feel dubious looking at the forecast's in the week leading up to it. Thursday and Friday remained dry, sunny and more than manageable but of course Mother Nature wasn't going to let us have all the fun, was she? Saturday and Sunday (bar some sunny spells on Sunday) were really, really wet. The rain was heavy and after a few hours, it was a mud bath.

But you know what, it really didn't matter. By the time Sunday swung around, everyone had come to terms with the fact the weather was out of their control and they dealt with it in true SGP style. This was the last one EVER, therefore behaviour was stupid, the music was rolling and the mud became friend rather than foe.

So, here's the to the music, to the DJs, to the absurdities, to the costumes, to the fireworks, to the Pagoda, to the Dance-Off, to the Collisillyum, to the sunflower field, to the 24-hour bar, to walking up the and down the hills at 7am trying to find your mates, to stacking it down the hill to The Drop every year, to the dodgems, to the naked sauna and to you; The gardeners who started something tiny and turned into something tremendous.

This is what went down at our last trip to one of our favourite places ever.

Funster is Mixmag's Deputy Digital Editor and he's still trying to find the exit to the Labyrinth, follow him on Twitter here