If dance music was a stereotypical, all-American Breakfast Club high school cafeteria, it'd be easy to imagine the divisions among the sprawl of lunch tables. Techno mavens would replace the goth kids, draped in black and black only, inexplicably alluring as they whisper trade secrets and sought-after IDs to one another. Across the way, there'd sit a rowdy group of EDM hot shots; the musical equivalent of a jock gang, all trying to play their remix of Ed Sheeran's latest radio hit louder than the other.

And in the middle of all this would be a table filled with a group of younger boys and girls, dressed in an array of colored tees and accessorized by DIY cut offs, bold hairstyles and refreshingly diverse faces, brought together by a mutual love of producing in the free-for-all digital music world of SoundCloud, Twitter et al. In the often divided world of electronic music, Moving Castle are the ones who'll gladly invite you to sit at their table too.

Taking the hypothetical to real life, Mixmag sits with Robokid (Ethan Budnick), AOBeats (Andrew Okamora) and Brett Blackman, two of the co-founders and current head behind the Moving Castle collective. In any other generation, Robokid and AOBeats, along with fellow co-founders Manila Killa (Chris Gavino) and Hunt for the Breeze (Faysal Matin), might've never found each other. Based all across the East Coast – ranging from Connecticut to Washington D.C. to Boston – the four sprightly producers first connected online in a Facebook group, brought together by a shared love of music and an eagerness to link with likeminded people. "We didn't know what we were doing at that point," Robokid says with a laugh, reminiscing back to days spent typing back and forth to one another in 2013. "But we were inspired by groups like BODY HIGH, Soulection, WEDIDIT – their crews and how they supported one other." 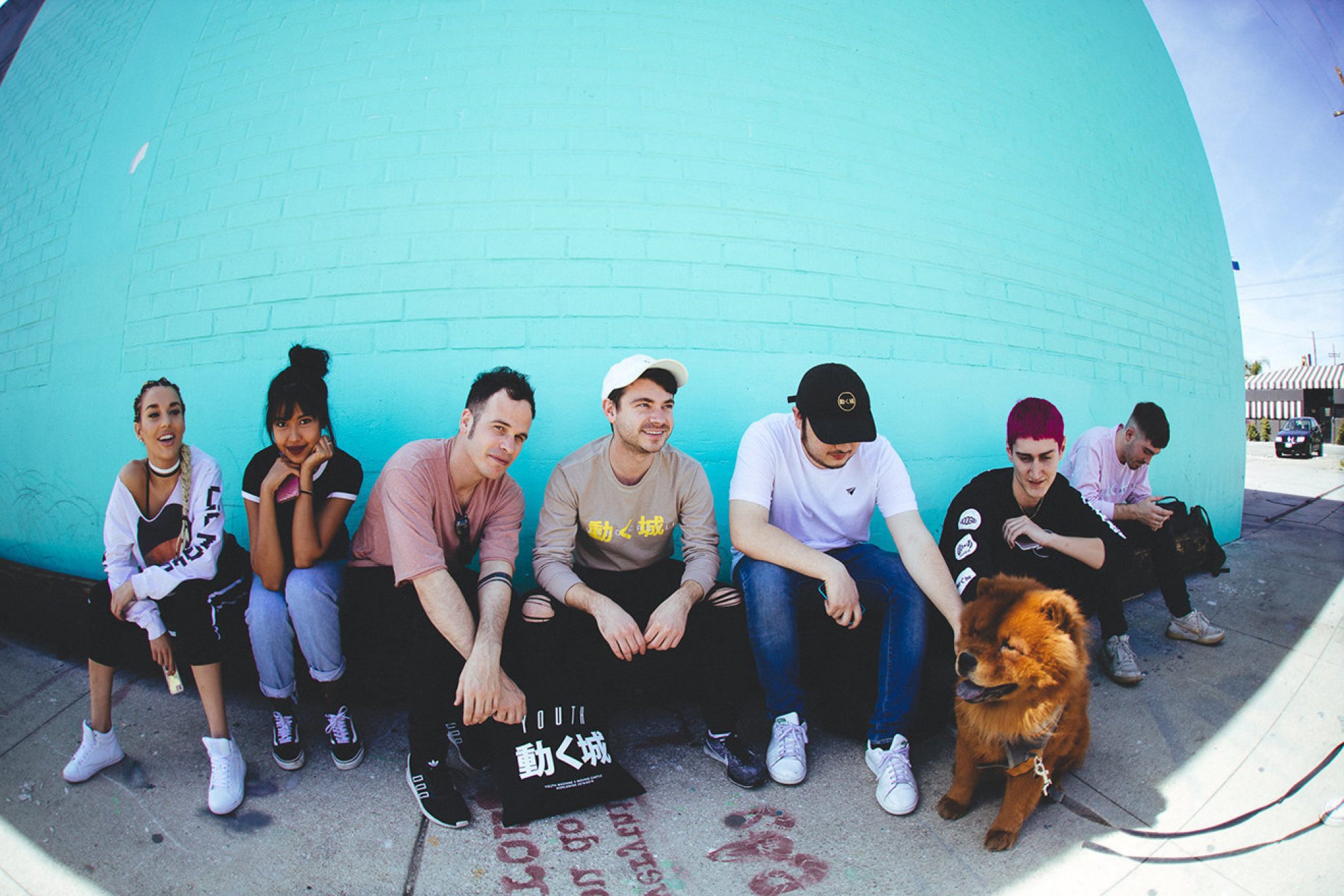 Moving Castle’s reach has rocketed since its start with the four producers only three years ago. Their roster expands across the globe with New York’s Jai Wolf, Canadian producer Chet Porter, Singaporean and OWSLA signee Mark Johns and Australia’s Dugong Jr. For a group of kids who, at the time, were simultaneously juggling senior exams and final papers, it’s an impressive feat - and all thanks to the magic of the internet.

There’s no argument: the collective as it is today is a product of a right time, right place situation. As the music industry worked tirelessly to catch up with the streaming boom, the digital realm of music was a great unknown frontier for these kids, allowing bootlegs and unofficial remixes to populate SoundCloud and inspire a new generation of bedroom producers. Give or take a few years, and SoundCloud might not have been the platform they needed to garner followings for their Lana Del Rey remixes or Foster The People bootlegs.

Manila Killa, who graduated from an international high school in the Philippines, recalls evading a family vacation in Bali and holing up in the air-conditioned lobby of the hotel. “They had an Apple computer, which had GarageBand,” he remembers. “I could piece together loops and arrange my own songs.”

Meanwhile, on the other side of the globe, Toronto-based Chet Porter was introduced to production after a career with his former band was cut short. “16 is a very malleable age,” he says, revisiting the beginning of his career in music. “My band was signed to a major label, but they tried to form us into a One Direction, asking us to wear all the same clothes and stuff like that. We ended up breaking up the band to get out of the contract.” Left on his own and still rabidly curious about music, Chet dove deep into the world of YouTube tutorials, teaching himself how to produce entirely from the troves of the Internet. 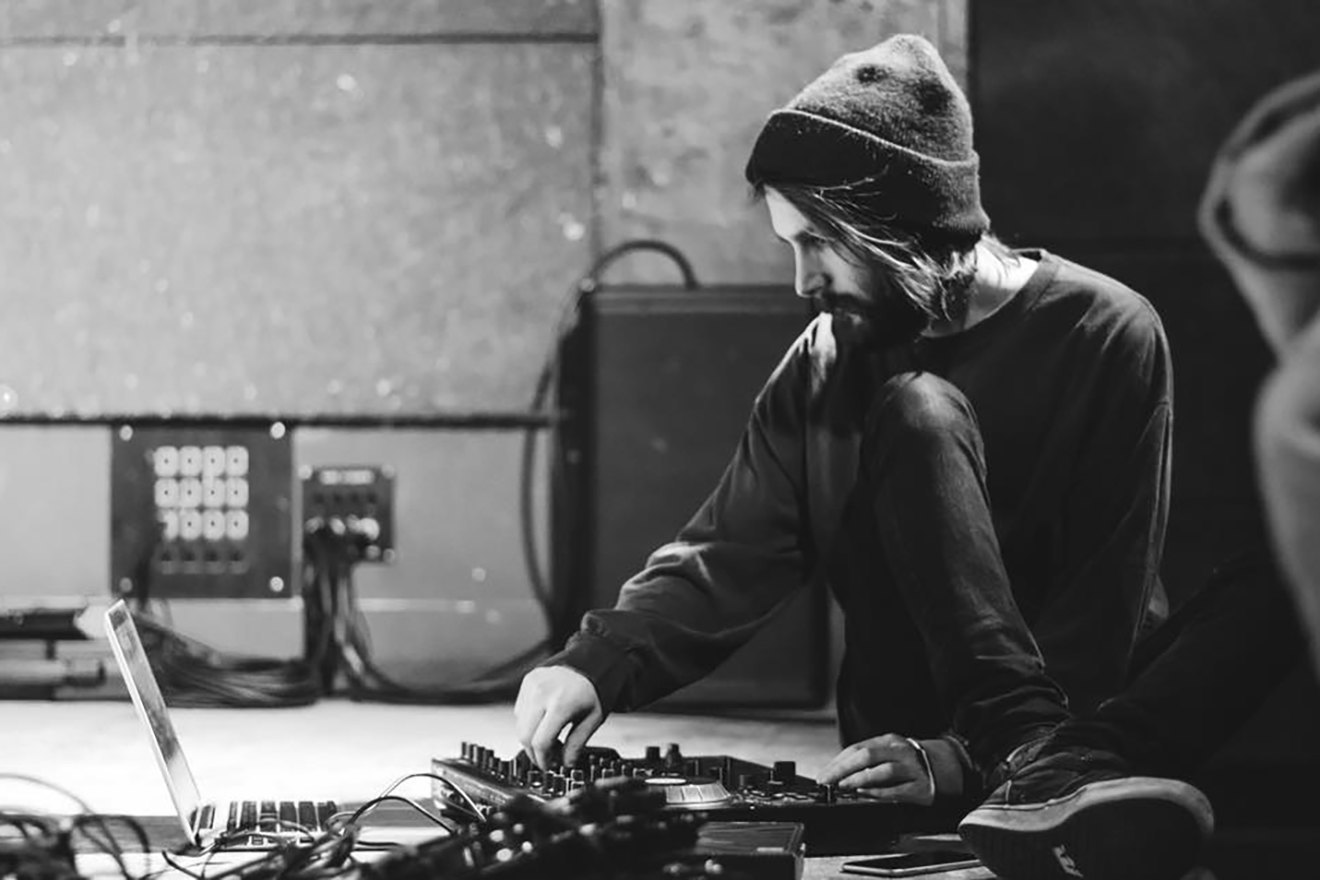 Their stories are all similar, and by no coincidence: internet whiz kids with a proclivity for music, self-taught through the digestion of video tutorials and a seemingly endless catalogue of electronic music, all available to them at the click of a button. Becoming a producer in the digital era is not difficult, but like any artist knows, there’s a limitation to a lone creative confined in a room. “In 2011, before I started Jai Wolf, I didn’t know people doing the same thing that I was doing,” Sajeeb Saha shares. Experimenting with his first productions, he found his way into a Facebook group of likeminded peers, one of whom was Manila Killa, a stranger on the internet he thought he’d never meet after seeing that he was based in the Philippines. After two years of exchanging tracks and messages, they finally linked up in New York ahead of a Disclosure show and he received the official invitation to become a part of Moving Castle. “Meeting other people allowed me to create an infinite feedback loop of creativity and inspiration,” he continues, now talking about life post-initiation into the collective. “In turn, what you create helps inspire them, and it goes back and forth.”

Back in Los Angeles, Mixmag walks through the busy streets of the industrial Arts District of the city with an extended gang of artists and Moving Castle members and it’s quite the sight to see. Texas singer Shaylen, who comes from a former career as a pop and TV star with a group called Savvy is a confident blonde with long, braided hair. She smiles for a selfie with Satica, a bright-eyed singer who oozes an easy positivity from the top of her messy bun to her black and white Vans. Suddenly, they're interrupted by the rumble of a cream white and fantastically retro 1998 Rolls Royce Silver Spur driven by Blaise Railey, a lanky character who is impossible to ignore with his neon pink hair. Beside him sits Alizzz, a Barcelona-based producer who is fresh off the flight from Spain but awake and buzzing with excitement. It's his first time meeting the Moving Castle crew in person. 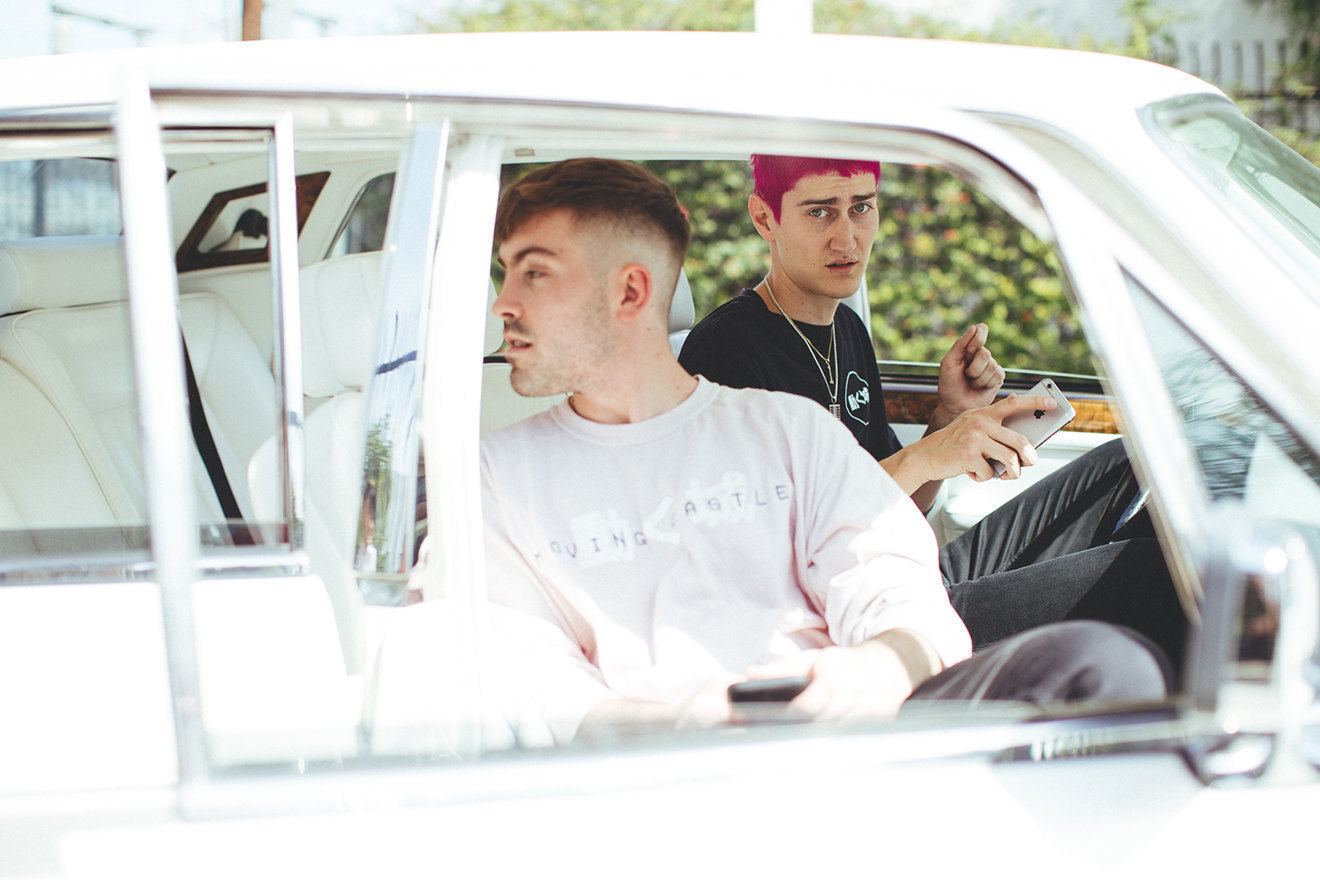 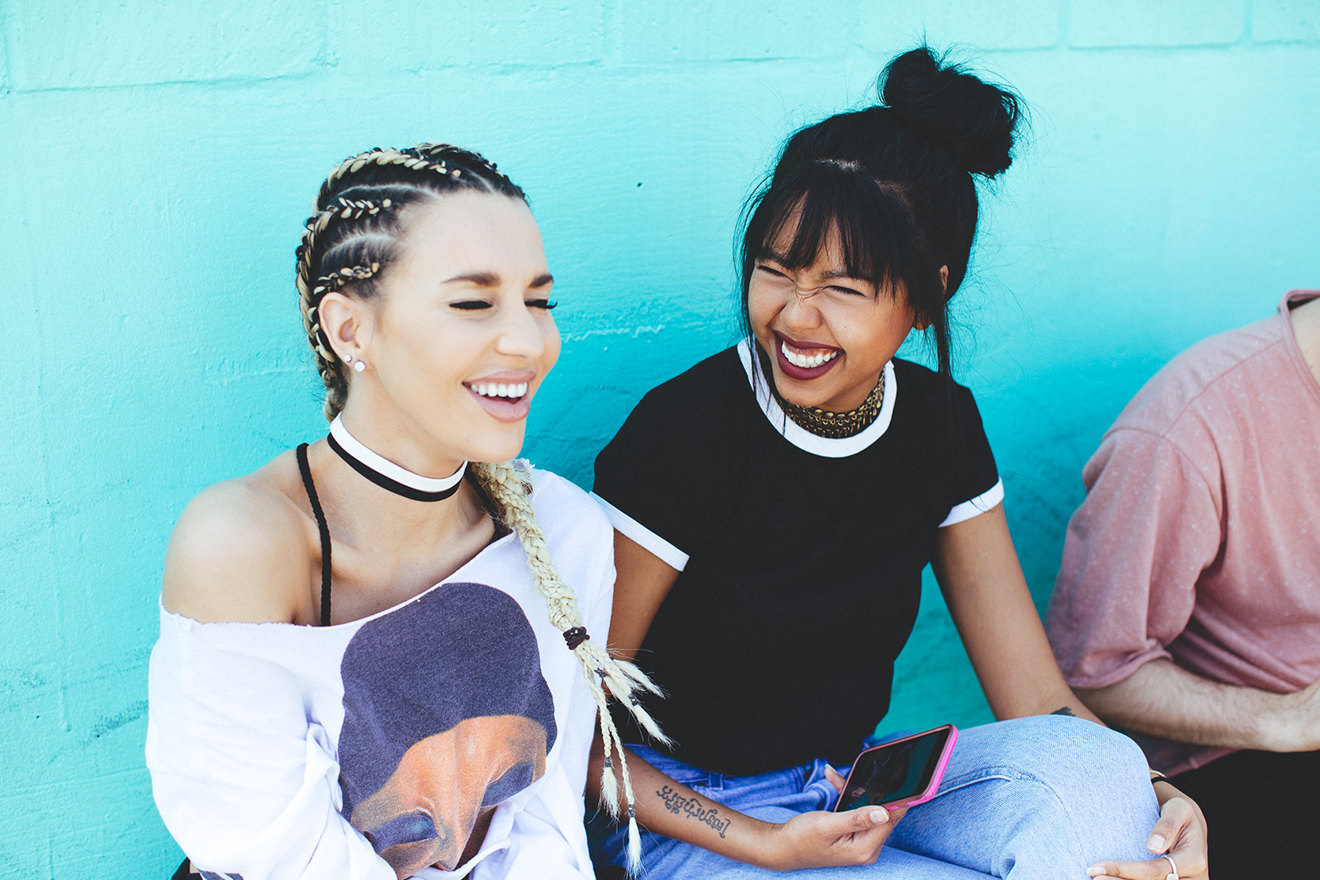 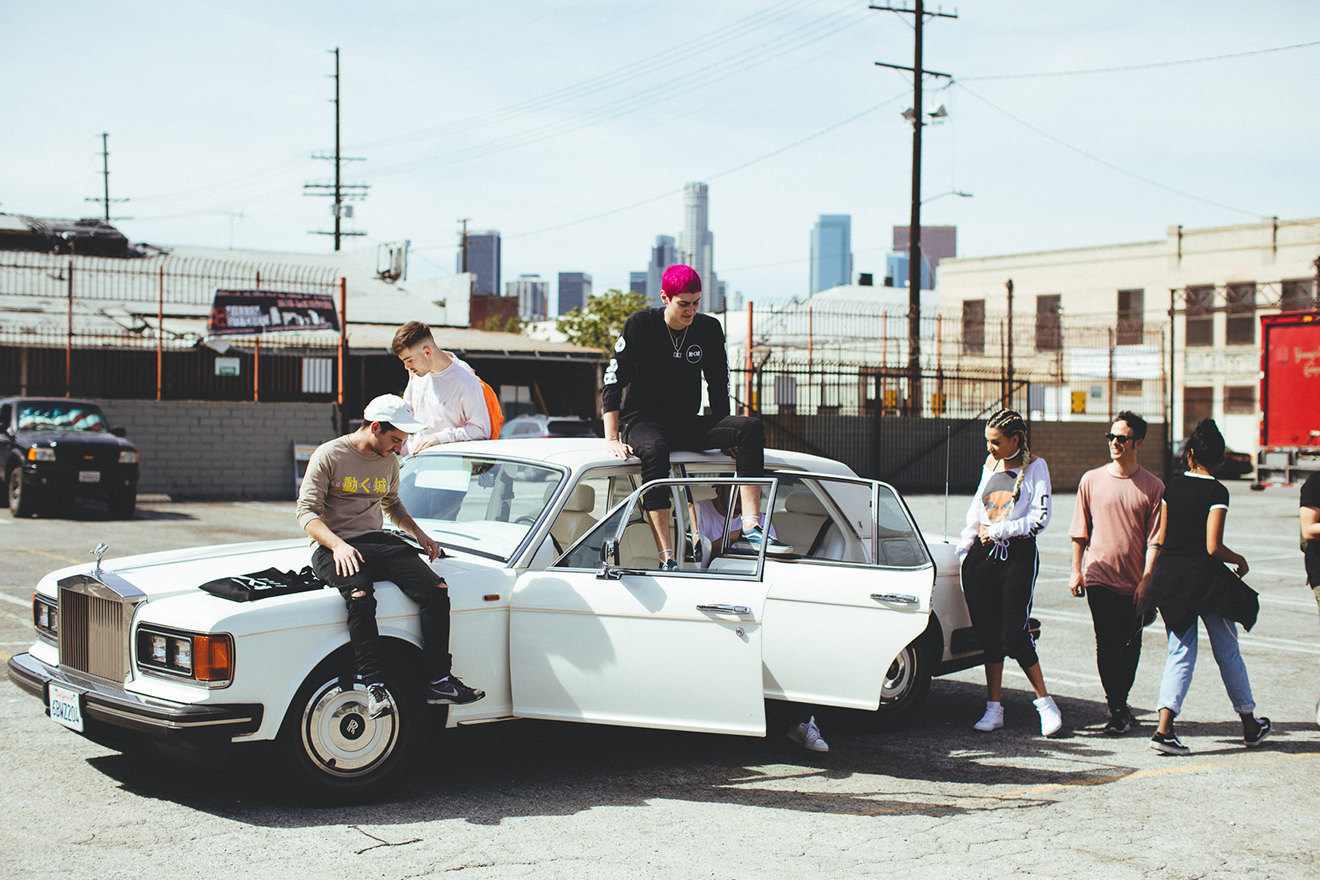 Producers, singers and rappers, the collective’s musical output is obviously diverse, but far from the only component that Moving Castle is known for. "Everything changed after the Boogiemade shirt," Brett Blackman says while laughing at the absurdity of the statement. "Skrillex wore it and it got us noticed by Mija, Cashmere Cat and Porter Robinson who from there found our music.” Known for curation himself, Skrillex’s stamp of approval helped establish Moving Castle as a notable player for the younger, but buzzing wave of electronic music fans. And if you think a shirt helping to define a brand’s status is silly, well, you’re already a step behind. Because it worked. 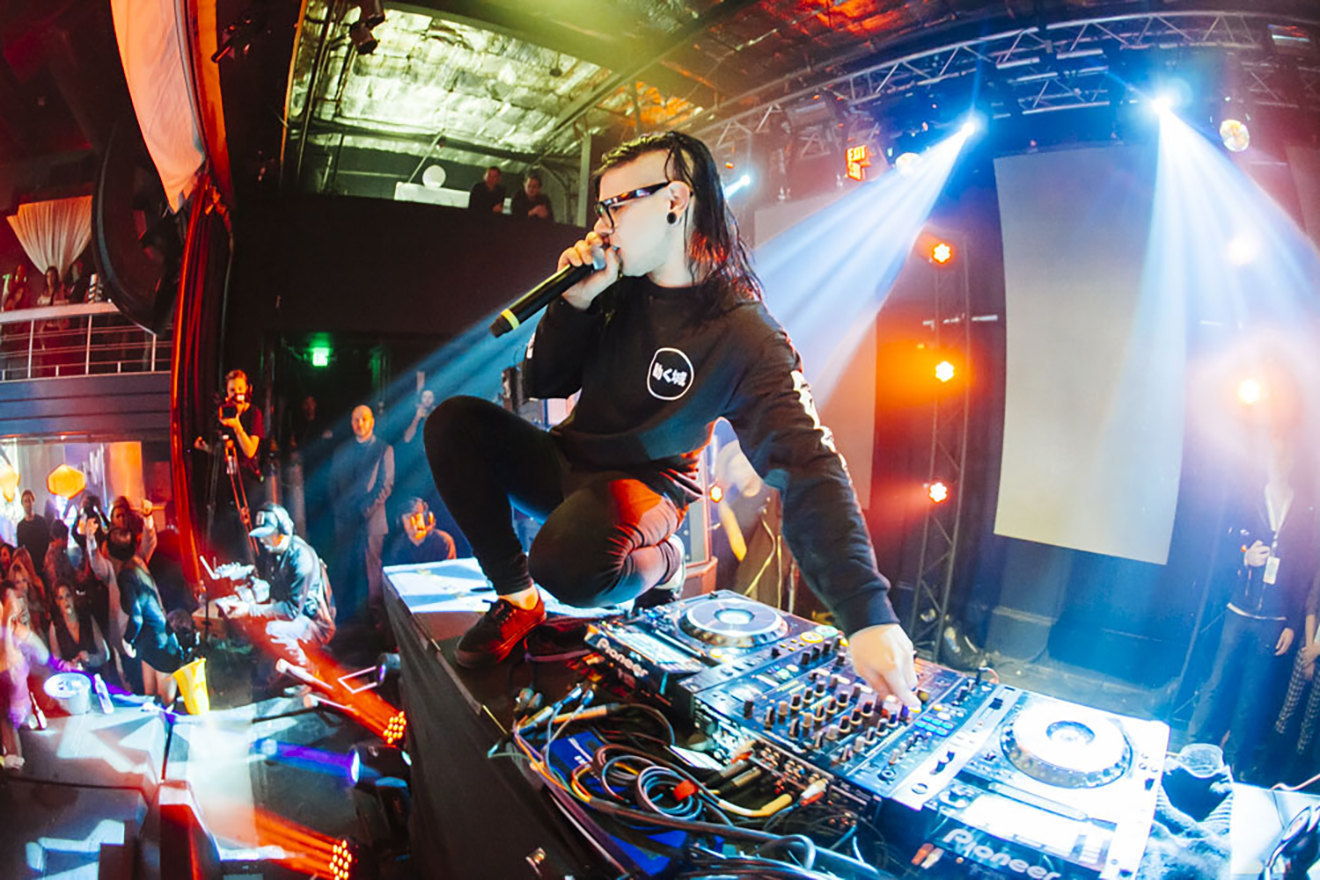 Later, Mixmag wanders with the crew a hop, skip and a jump away to a nearby studio where singer Mark Johns is recording. Born Naomie Abergel, she drapes a chunky mustard scarf around a flowing grey shirtdress as she smokes on a studio break outside. Raised in Singapore, she was also brought into the collective by Manila Killa, who popped her into the Moving Castle Facebook group and let the rest of the magic happen on its own. Moving to North America (Florida, in specific) for university, she finally began to make the connections URL to IRL. Nearing the end of her break, she laughs with the crew remembering her first summer in Los Angeles, living on one of their couches and doling out a story about a roommate hiding a cat from another with allergies. It feels like a family reunion.

Eventually, the pieces came together when she released a cover of Kanye West’s hit ‘Ni***s in Paris’. Post shirt and Moving Castle discovery, Skrillex found the song, reached out to Naomie and moved her to Los Angeles and signed her as the very first singer on his OWSLA imprint. Still think a shirt can’t make a difference? 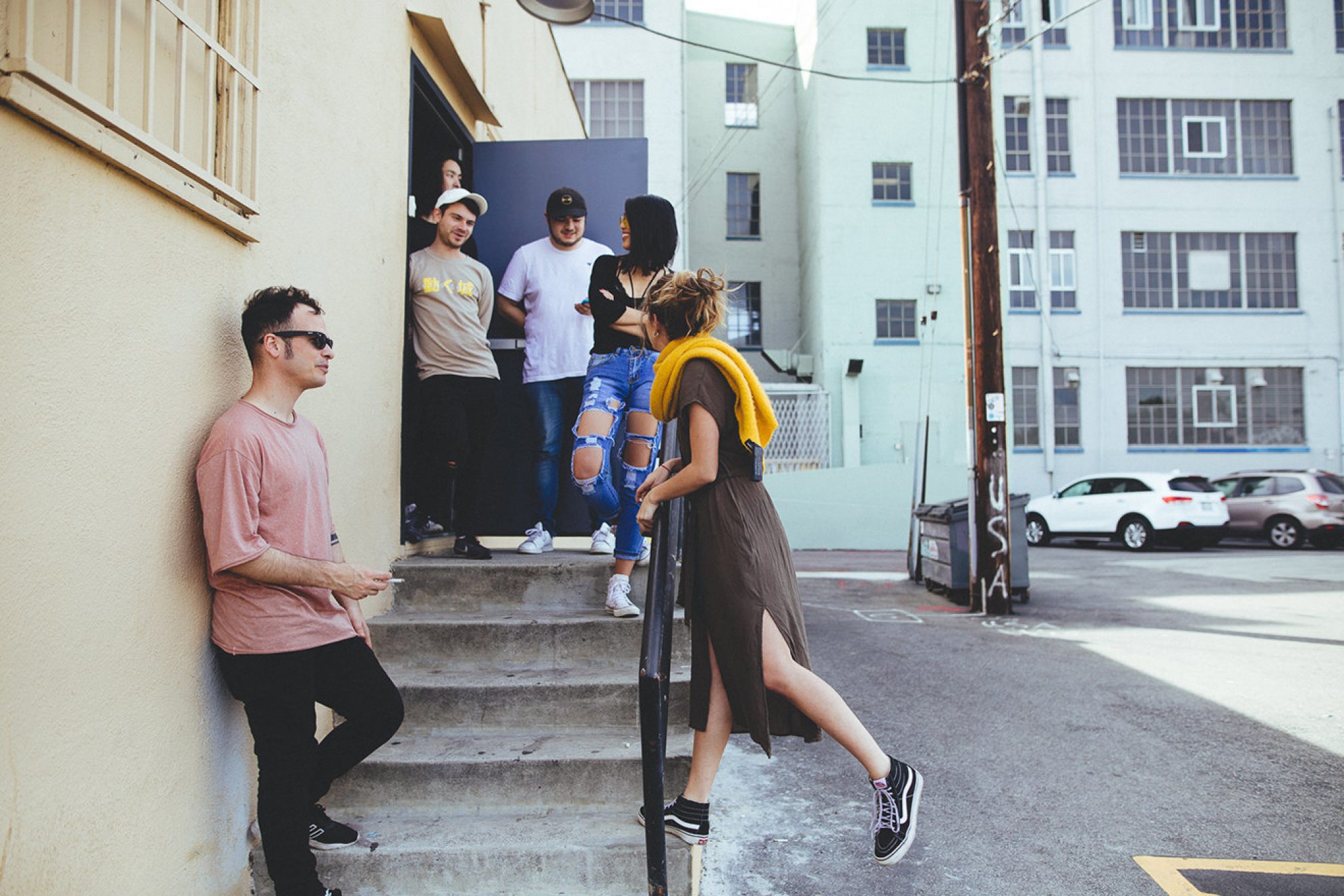 The fans dutifully followed in Skrillex's lead, digging even deeper into Moving Castle's SoundCloud, following along each of the artists individually and purchasing merch from all corners of the world. “It’s wild,” says Robokid, who also oversees the merchandise and business side of the collective. “We can’t pinpoint any one region as our main fan base because orders for our merch comes from everywhere.” As appreciative as they are, the guys don’t relish in their newfound fame, and almost seem uncomfortable being idolized on a pedestal. They laugh, almost embarrassed, over a fan meet-and-greet on tour in Georgia and recall being in awe of a fan's Moving Castle logo tattoo. Make no mistake: it’s not because they don’t love the fans, but rather because they feel they’re no different than them. “At the end of the day, we’re just normal people, relatable people," Jai Wolf contributes. "It’s cool that people can gravitate towards the culture that we’ve cultivated.”

Take a look at the artists themselves: young and fresh-faced, they’re diverse in gender, ethnicity, style and identities. Moving Castle represents faces that are so often left out of the electronic music picture. “Moving Castle’s story is captivating. Obviously there’s talent involved, but diversity also carries a layer of intrigue,” Jai Wolf adds, an Indian American and passionate Millennial in a turbulent time for immigrants, minorities and young people in the United States. “I love seeing an Indian guy in movies or on TV and I’m sure our enormous Asian fan base in Asia feels the same way when they see Chris (Manila Killa). They want to follow his story. It becomes their journey too.”

Much like the way ravers of the 90s still reminisce about the “good ol’ days”, fans of Moving Castle have grown along with the collective’s young members every step of the way. Entering into the journey at ages that range from 19 to 22, the founders have written their autobiographies starting with the collective’s earliest compilations to the full-fledged album releases of today. “That’s the best part about it,” Chet Porter says, flowing easily over the phone about his favorite things about Moving Castle. “Everything is organic.”

"It’s been incredible to go from putting out bootlegs and edits to becoming tastemakers and releasing full EPs and albums. Three years ago, we never would’ve thought we’d be putting out clothing lines and releasing albums from producers in Barcelona.” At only three years old, Moving Castle is already curating festival stages at HARD, Counterpoint and Splash House and consistently adding new global artists to their roster. “Our goal is to keep making music and art,” Robokid contributes. “To have the resources to create, and do cool stuff with music. Not focusing on the numbers. We want to survive doing what we want to do.” 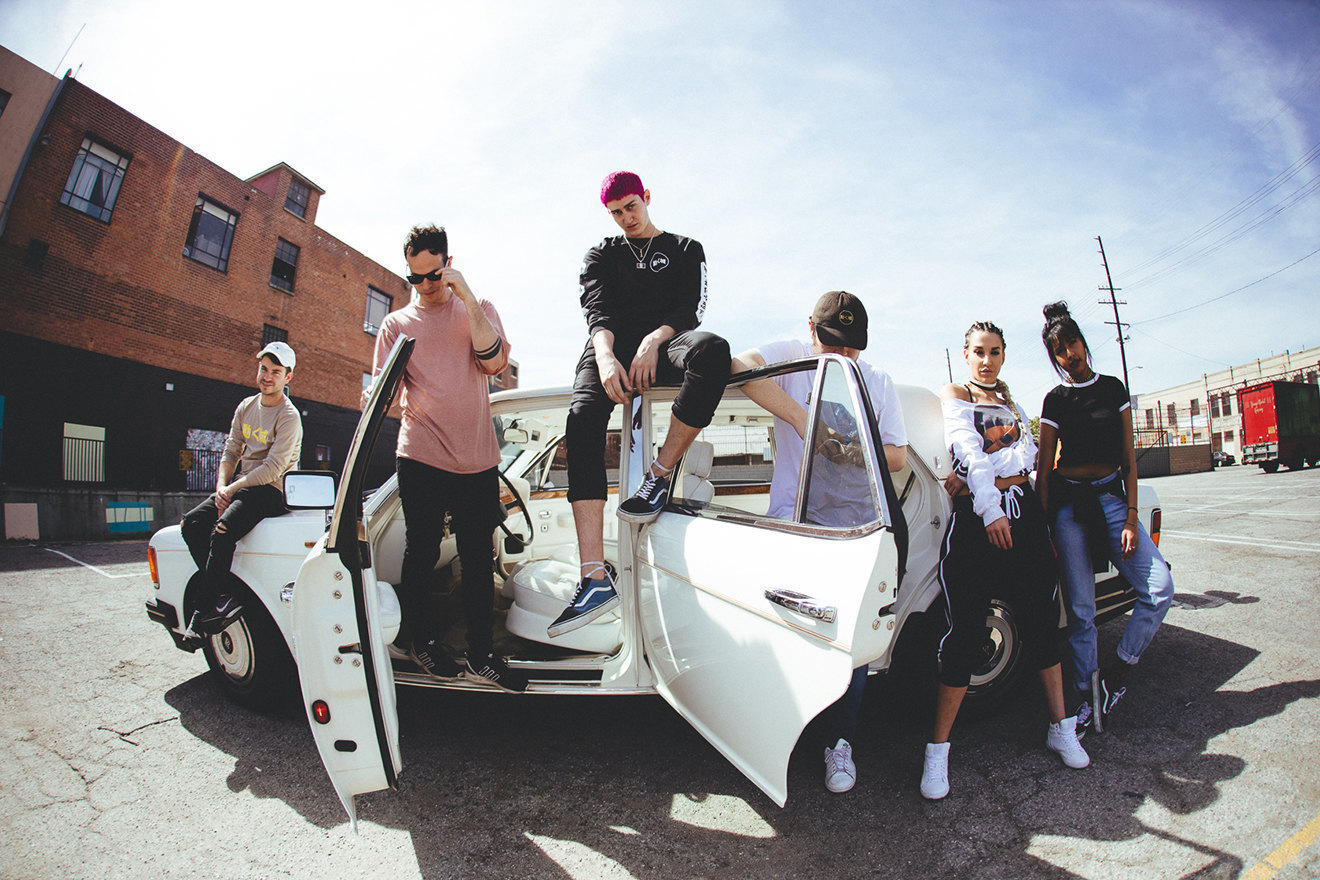 "Moving Castle’s story is captivating. It becomes the [fan's] journey too." 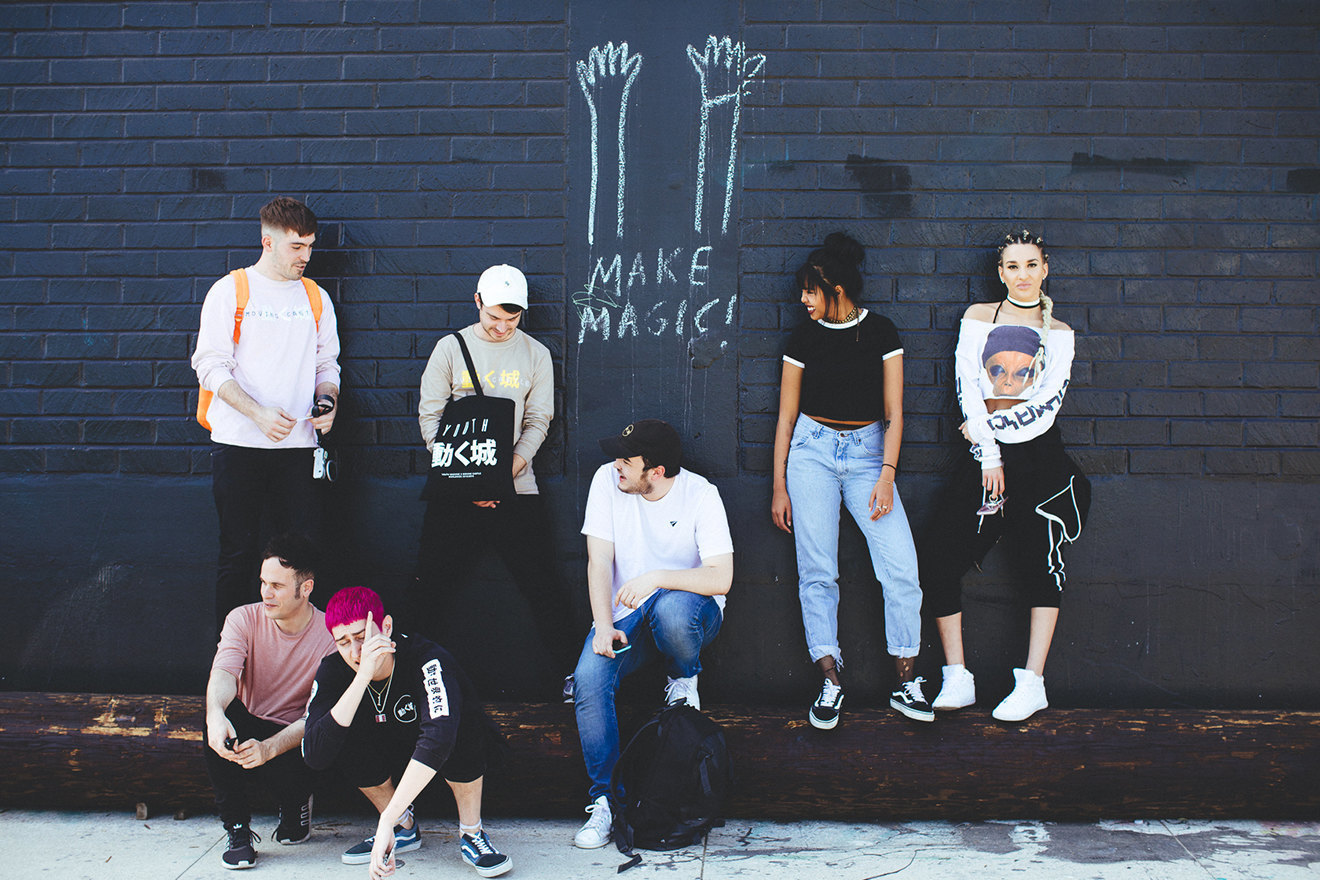 Flashback to that hypothetical table in the high-school-turned-dance-music cafeteria. The table is getting longer by the minute, and everyone seated keeps waving in passerbys to join them. “Our fans just want to belong to something,” Manila observes. “Dance music can be very cliquey. If you’re not part of one, why not make your own?” Jai Wolf seems to conclude for Manila, despite being on an entirely different call. “Moving Castle is a movement. You’re free to come help us, join us and be a part of it. We’ll be here.”