The first thing you notice when you land in Ibiza is the club branding: you can buy tickets for parties from the ATM in arrivals; billboards featuring smouldering tech-house bros swarm the main roads and merchandise stores pushing Pacha cherries and caps lock IBZ slogans are omnipresent. Everyone knows this, of course. It’s all part of the noise that surrounds the White Isle’s club culture. As synonymous as ice cannon, pulsating big rooms and endless endorphin rushes.

But down a dead-end lane on the edge of the island’s west coast, all that noise quickly disappears. This is the location of Hostal La Torre, a tranquil boutique hotel that overlooks the Balearic sea and plays host to casual sunset sessions from DJ Harvey, Alfredo and International Feel founder Mark Barrott. The residence dates back to the 60s but was recently put on the radar by the Mambo Brothers, who acquired it a couple of seasons ago and swiftly transformed it into an oasis of tranquility and understated opulence. 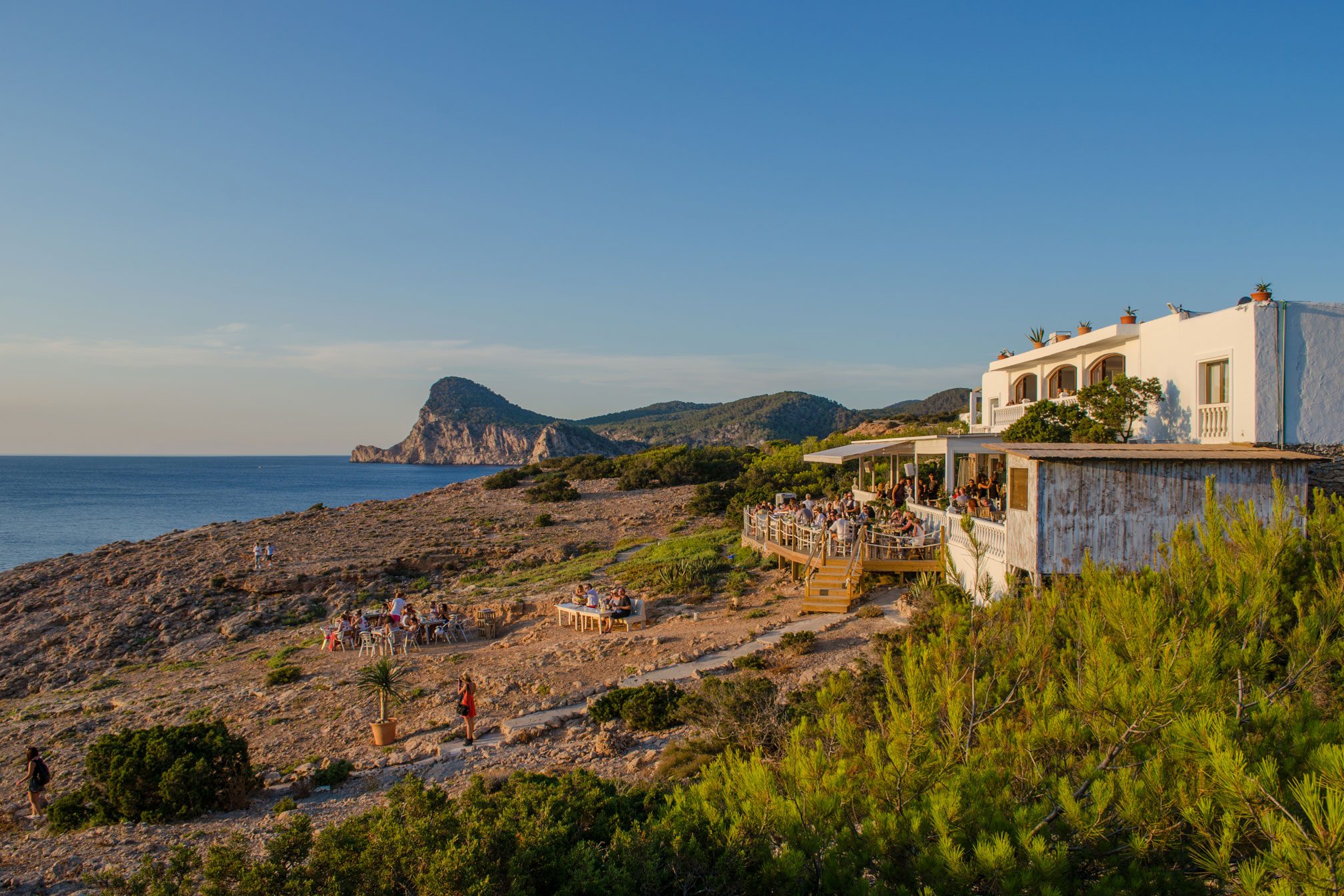 “[We’re trying to create] that Ibiza vibe we all love. The true bohemian vibe from the 60s that Pink Floyd and George Michael fell in love with back when Ibiza was unexplored and somewhat raw,” explains Alan Anadon, the younger of the two Mambos. “The remote location, the magical view, the feeling of being there is like being transported 50 years back in time to when there were no phones and you just lived for the moment.” While you have to take statements like these with a pinch of salt – a swathe of iPhones comes out to capture the sunset view from La Torre’s terrace and the drinks definitely aren’t free – it’s impossible to deny its allure and the fact that it’s one of the most beautiful dance music-related destinations on the island.

The hostal sits atop a hunk of red rock, facing a panorama of blue sky and even bluer water, its modest two-tier terrace spilling out onto a cliff that slopes gently down to the sea. By day, it’s brilliantly still and calm, silence broken only by soft Balearic music that wafts from the bar; in the dead of night, the only sound that can be heard is the steady rhythm of a thousand crickets, who chirp ‘til dawn. La Torre is a neat sidestep away from the party hype that rages in areas like San Antonio (just an 8-minute drive away) but you’ll see members of staff carrying equipment across the hostal’s shady courtyard on baking afternoons, a hint at the electronic pulse that’s found here. 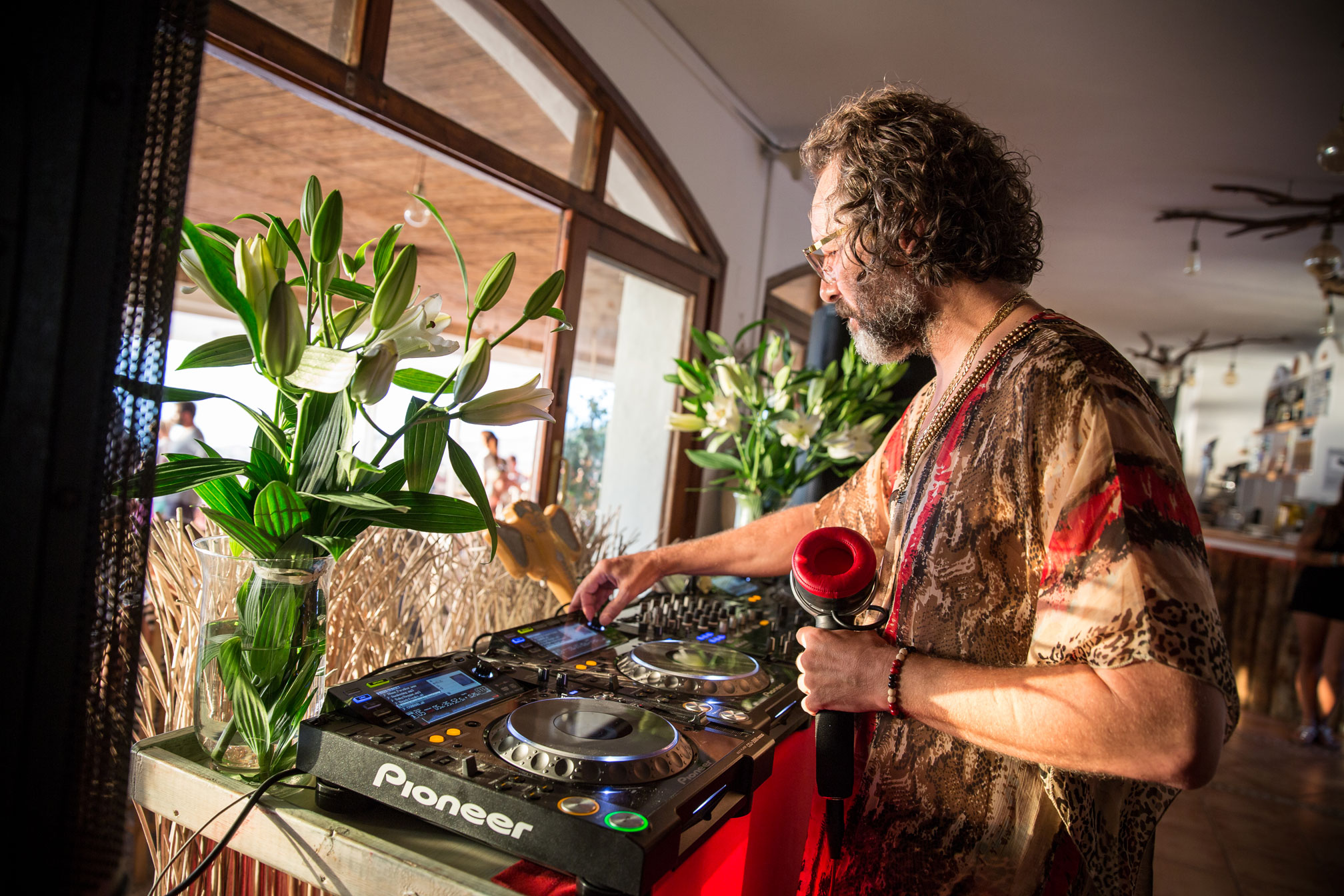 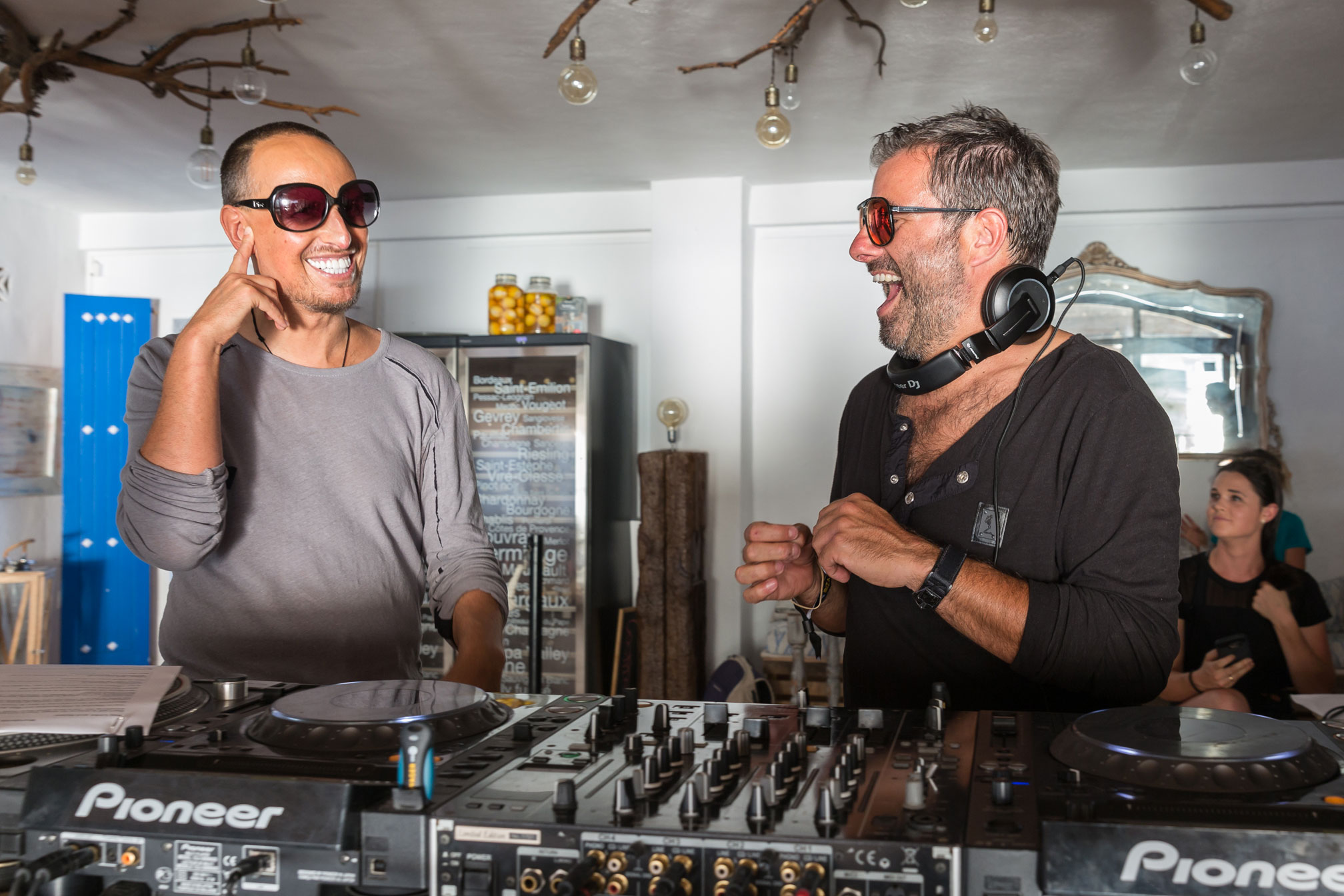 “I actually stayed at La Torre for the entire season in 2016, eating magnificent food, DJing, playing some of my favourite music and hanging out with the other DJs who came through,” says DJ Harvey. “It’s quite the covetable gig. It’s always a tear between wanting to keep somewhere secret but wanting everyone to experience the magic.” The hostal comes alive in the period between late afternoon and early evening, as a selector takes to the turntables that overlook the terrace, and a spectacular sunset occurs on the horizon. There’s no booth, just a table with decks on, and the music acts as a backdrop to the wonderful colours in the sky. When a song like John Lennon’s ‘Love’ ends at exactly the same as the sun disappears into the sea, applause rings out into the warm air. 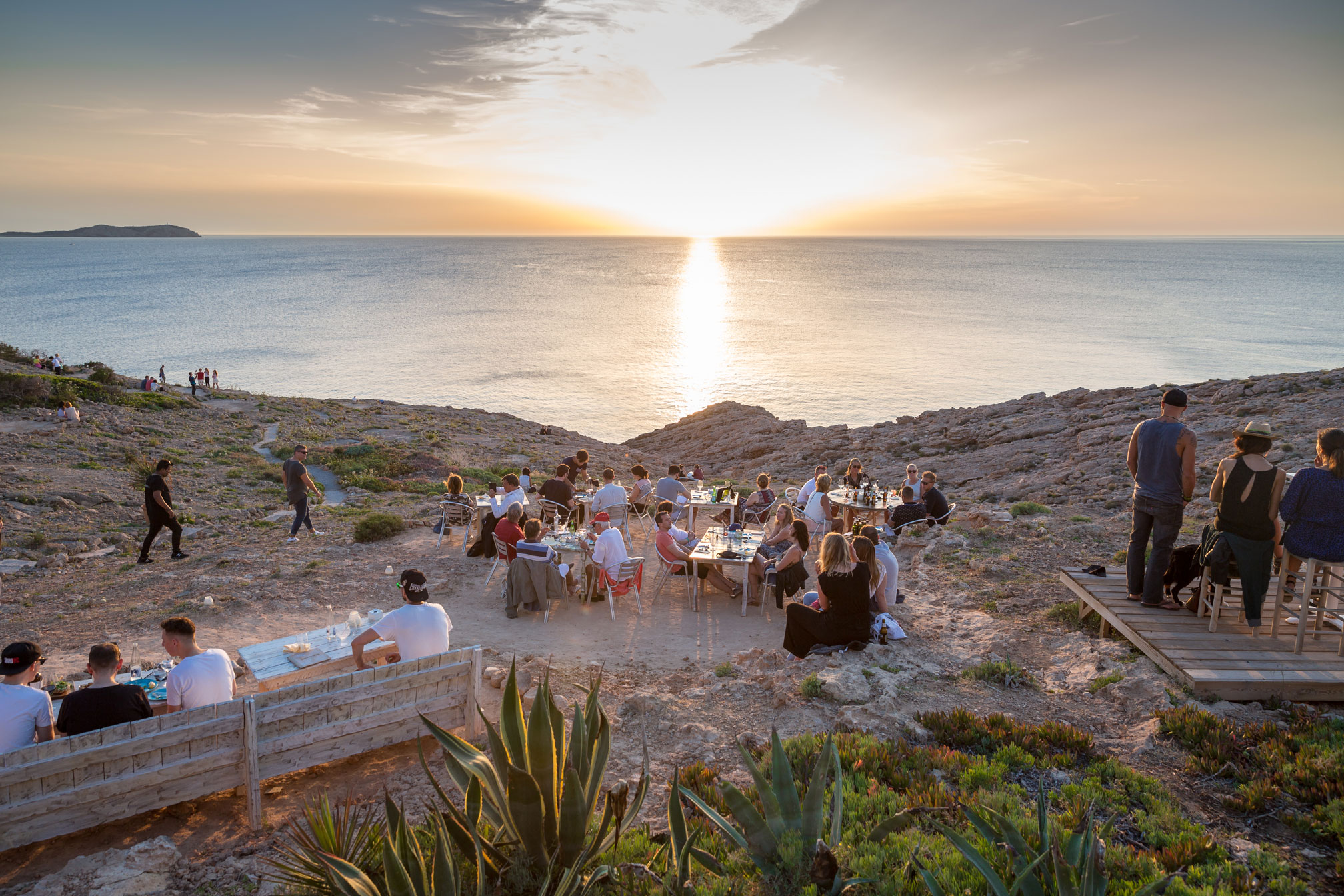 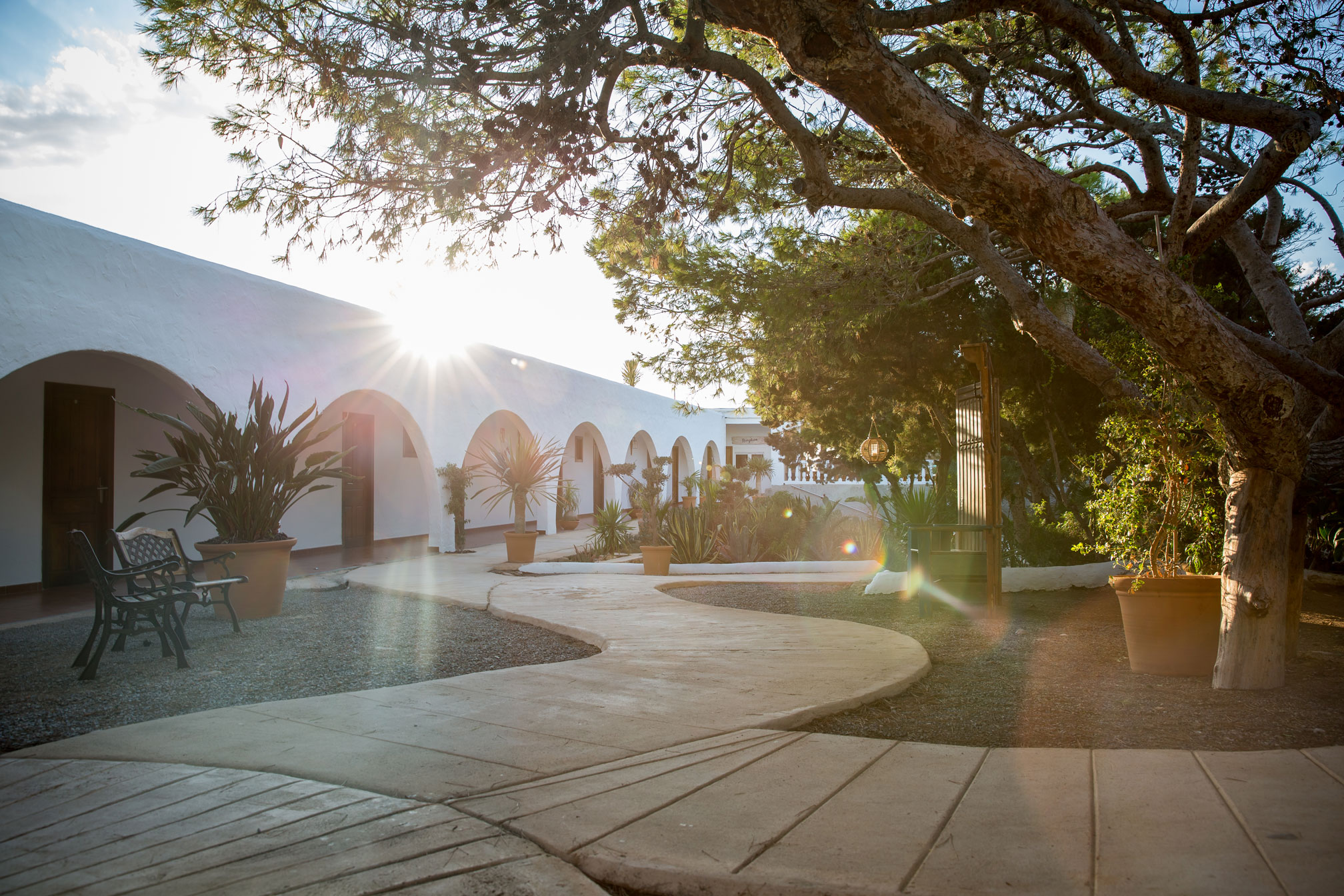 While there’s no dancefloor (or much dancing at all) and the volume is kept at a level that allows conversation to flow, there’s definitely something about La Torre that justifies the Mambo Brothers’ positioning of it as a throwback to the halcyon days or, at the very least, a refuge for those feeling a little jaded by big rooms and one too many bug-eyed budget flights home. The natural beauty around the hostal is pure tonic for those of us who live in ever-more polluted cities and there aren’t many (any?!) places where you can eat a 25€ octopus leg on a rock face surrounded by the sea, stars and the sound of Harvey’s record collection. At peak time when the sun goes down – about 9.30pm in July – a mix of knowing Ibiza heads, couples on a romantic tip, middle-aged holidaymakers, members of the island’s Jet Set and eager fans of the billed DJs congregate on the terrace or on the sofas and stools dotted across the cliff, enjoying cocktails while the sky turns pink.

You could of course have a luxurious time here but the whole experience is attainable: there’s no cover charge, a glass of house wine is 6€ and cocktails are 15€, main courses start at 21€ (chicken thigh in tamarind with rice) and rooms start at 82€, there’s no dress code and you don’t have to make a reservation if you want to catch the sunset. Simply pick a spot anywhere out the front of the hostal. Hanging here is an occasion in itself or the perfect prelude to a long night out. 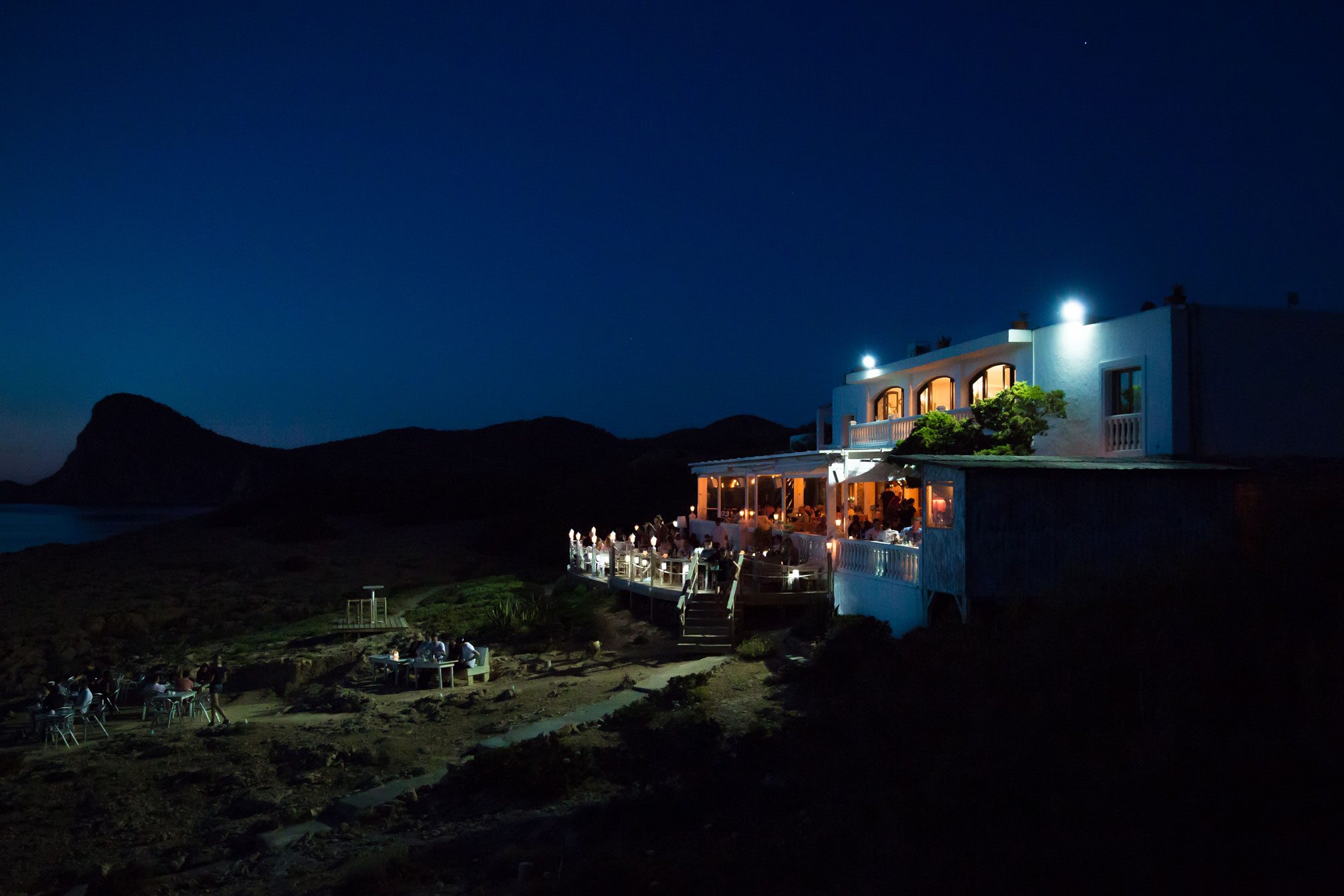 “It’s a hotel, bar and restaurant that is in business to make money,” says International Feel founder and La Torre compilation curator Mark Barrott when asked if the hostal chimes with his anti-establishment approach. “But when you factor in the positive attitude of the owners and their trust in the ‘anything goes’ music policy, combined with the vibe and view, I think you get as close as possible, in the modern ‘Las Vegas’ Ibiza, to the original spirit and magic Ibiza of 30 years ago, but framed in a modern context.” La Torre is less rowdy than Pikes but shares an affinity with the famed venue for wanting to preserve the island’s spirit and a visit should coincide with trips to Cala D’Hort and Es Vedrà, Ibiza’s Old Town or any of the beaches that lie in the hostal’s vicinity. Book a room and wake up early to take the short walk south to the sandy coves of Cala Gració and Cala Gracioneta (featureing El Chiringuito, La Torre’s excellent sister restaurant which straddles the beach) or make a brisk hike north to rocky outcrop and bona fide hippy hangout Punta Galera. Carry on and you’ll soon come across the sparkling shores of Cala Salada and Cala Saladeta. You could hire a car, but as some prime spots are so close, you could easily base yourself at the hostal and forget about the rest of the world for a while.

And that's pretty much why La Torre leaves warm memories for weeks after you've departed its terracotta embrace. You'll find yourself at the bottom of its ancient fisherman's steps, watching small waves lap at the rocks as darkness descends, or at a deserted Punta Galera at 9am, marvelling at the way the sea sparkles at that time in the morning. Then you'll be rubbing shoulders with the one of the DJs who helped shape the culture as we know it and talking deep into the night in a setting far removed from the reality of home. And it's open all year round, ready when you are.

Hostal La Torre is open all year. DJs play every day during the summer and on Thursdays, Fridays, Saturdays and Sundays during the off season. Rooms start at 82€ and you can book here