It’s four o’clock on a Thursday afternoon and Mixmag is on the dancefloor of Amsterdam’s Melkweg with none other than techno legend Dave Clarke. But far from enjoying a jolly old afternoon rave together, he’s trying to run us over with an industrial scissor lift. “Wheeeeee!” he yelps with unconcealed glee, aiming the vehicle directly towards us as we move steadily backwards, trying our best to take photos. The machine’s journalist-crushing wheels stop mere millimetres away as he finds the button that makes the lift’s platform go up and down. “Fucking brilliant!” he sighs, elevating himself slowly towards the venue’s ceiling. “I might get one of these for the house...”

The fact this all happens within 15 minutes of meeting the Brighton-born techno legend would seem to underline his reputation as a somewhat grumpy chap, cynical about the music industry – or any industry for that matter – and prone to doling out forthright opinions on everyone from Nigel Farage (“a cunt”) to tech-house DJs (far too many insults to actually list). But the next few hours of exploring his adopted city of Amsterdam inevitably reveals a much more complex persona: outspoken, yes, but also gentle, cultural, amusing, fastidious and with a revealing penchant for detail and the finer things in life.

“I had to start our tour here because I’ve been working with these guys for so long,” he explains, at last clambering out of the scissor lift. “I actually DJed here in the nineties, but over the last decade or so we’ve formed a very close working relationship. The staff has changed in that time, but they’re always very sweet and professional. My ADE night is now in its thirteenth year and doing very well, but the club has also taken a risk with my new Whip It electro night, which shows they are not just about the money. That’s quite rare for a club these days.”

As we emerge from the dark confines of the venue into the bright afternoon sunshine of the city, Dave cuts a somewhat gothic figure in black jeans, black boots, black jumper and a black overcoat featuring an image on the back of what seems to be an illuminati-esque third eye superimposed onto the head of Socrates. The only concessions to not-black are the heavy silver jewellery around his neck and on his fingers, which happens to perfectly match the grey flecks in his black beard.

“I moved here because I felt a very warm and positive energy immediately,” he explains as we stroll along one of the city’s famed canals towards our next destination. “I still feel it has that. I love walking around the streets here and admiring the architecture. I’ve opened up a lot of my Dutch friends to the beauty of their city, which can be over-familiar to them. I live my life in clubs and studios and on planes, so at home I need to be surrounded by inspirational stuff. I couldn’t live somewhere like Berlin where it’s so bleak and cold that even the polar bears commit suicide. Maybe when global warming hits properly I’ll consider it.” 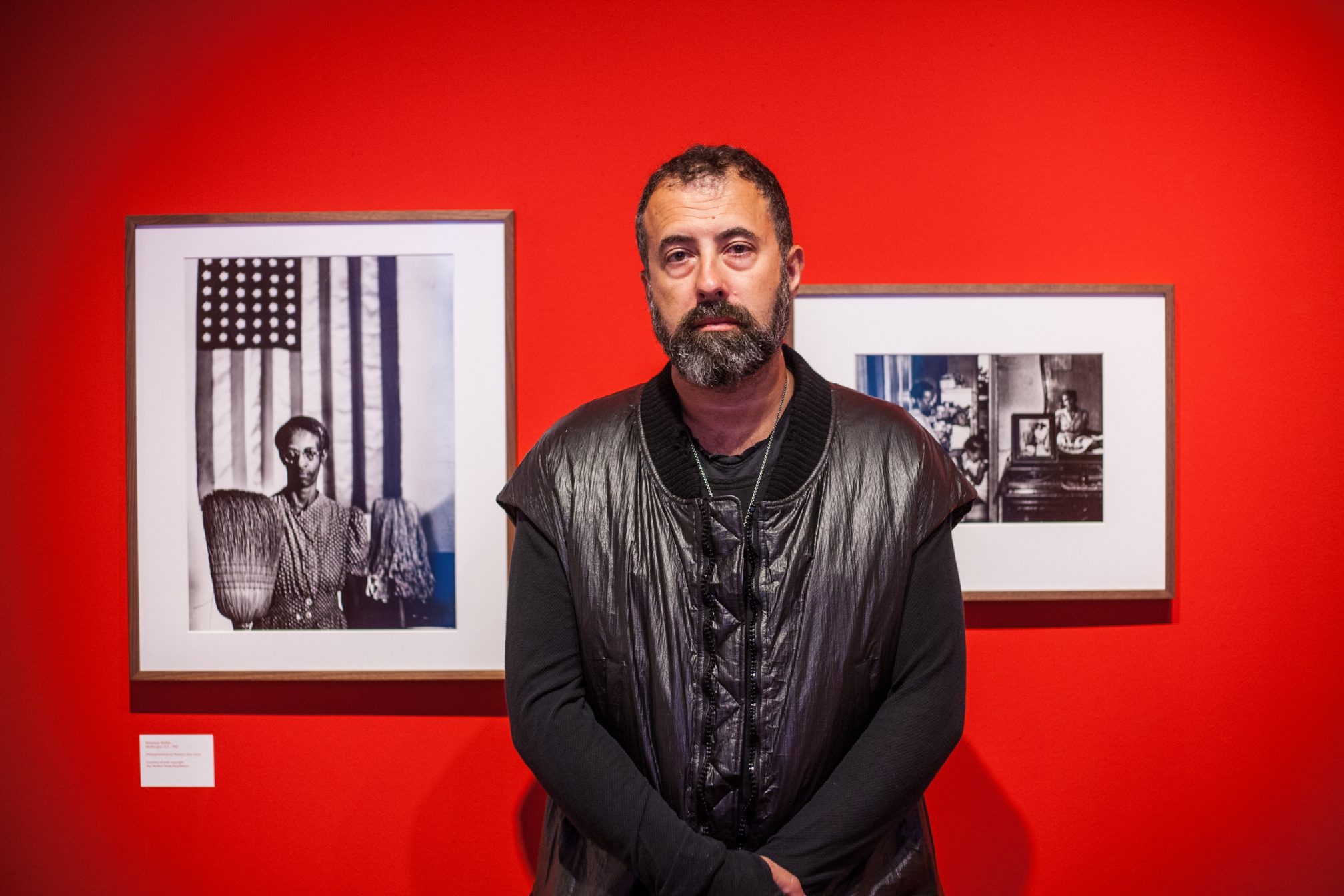 We enter Amsterdam’s FOAM Gallery, a classic white-cube gallery space set inside a handsome 19th century building. A Gordon Parks retrospective is showing, and Dave explains his fascination with photography – his father gave him a camera when he was nine, and he’s just purchased a limited edition Leica to start snapping again at a more serious and artistic level – as we inspect Parks’ powerful images.

“When I was growing up my family would take me to places like the Imperial War Museum or the Transport Museum. It was fun to sit inside a bus from the War era, but we never went to more cultural places like art galleries,” he says. “Moving to Amsterdam opened that up for me. When I first moved here I remember wearing a Vivienne Westwood T-shirt that said “Fuck Art” in the art district and people looked rather annoyed. Now I have a museum pass for fifty Euros a year that’s valid for nearly all the museums in the country.”

Accessibility is a big theme for Dave. We meander from the gallery to the sprawling Concerto record shop where, over a generous slice of apple pie in the store’s charming cafe, and after Dave snaps up some vinyl reissues by the likes of Prince and Big Daddy Kane, he admits to finding some Amsterdam techno stores generally too snobby. “I get all my dancefloor stuff digitally now anyway, so I prefer to come to shops like this where they sell a bit of everything. They’re as friendly as fuck here. I did a signing here recently and my neighbours turned up with their kids. I’ll often come here on a Sunday after a weekend of gigging and decompress. I support this place heavily. In fact, I discovered the Anika record here a while back.” 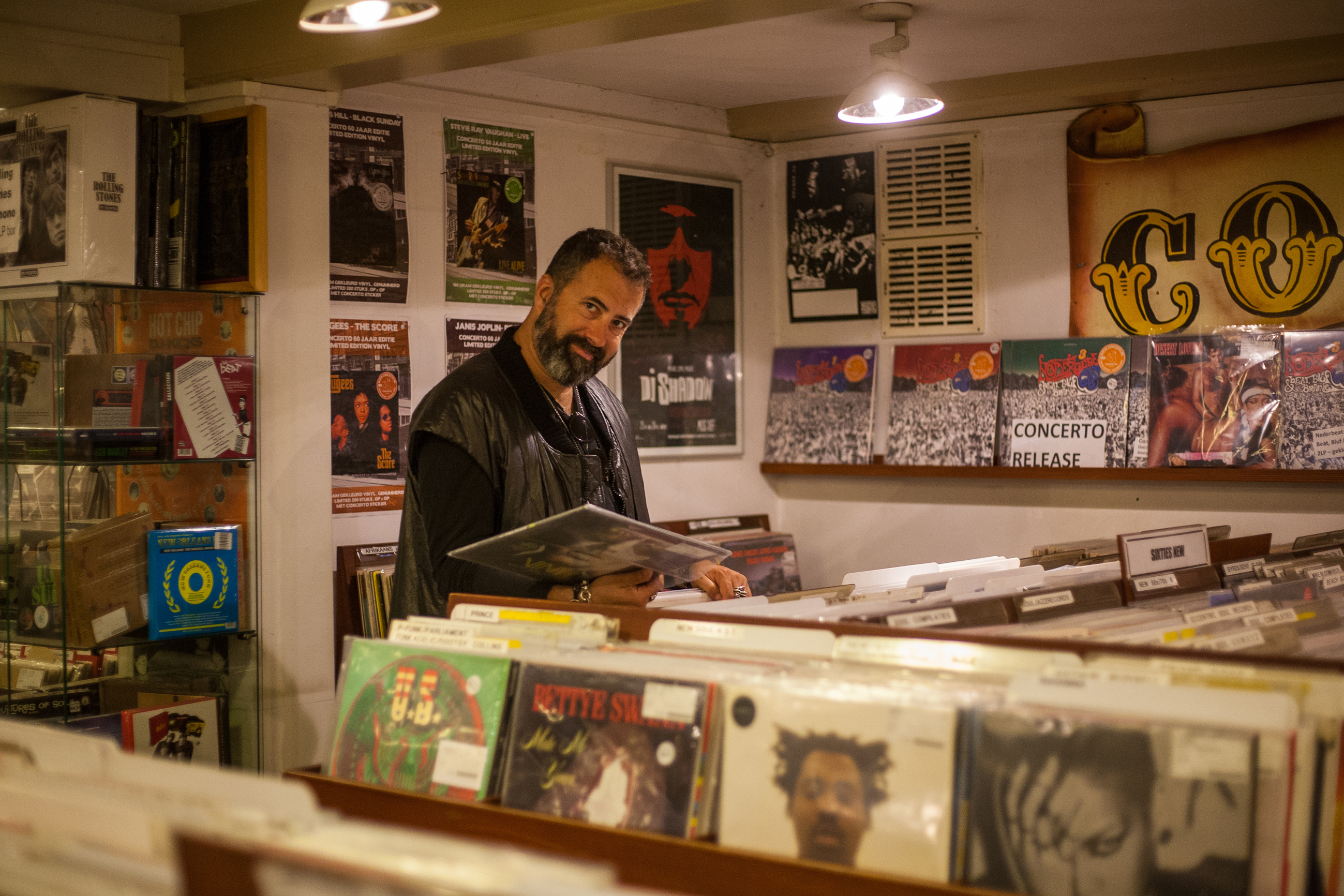 Aha – a pertinent moment to discuss Mr Clarke’s new record, ‘Desecration Of Desire’, which features notable collaborations with not only Anika but former Queens Of The Stone Age member Mark Lanegan (see lead single ‘Charcoal Eyes’), LOUISAHHH, Mt Sims and Gazelle Twin. It arrives more than a decade after his last (and second) album, ‘Devil’s Advocate’, and marks a clear step away from the standard techno-and-electro templates into a whole new universe of brooding, atmospheric soundscapes and songwriting.

“I wanted to make a body of work that represented what I feel now, and what I love now,” he comments. “I’ve opened up a lot, personally and emotionally, since moving here to Amsterdam; I have more of a European perspective, if you like. I couldn’t have made this album in Britain. To me, the old [albums] sound very inexperienced now. Before, I would work until five in the morning and think everything sounded brilliant, and then the next morning realise it was shite. Now I work for a couple of hours a time in the studio and if it seems to be working, I leave it until the next day. If it still sounds good, I’ll stick with it.”

The punk influences apparent on the album have been with him a long time. It’s no coincidence that his favourite accolade (“The Baron Of Techno”) came from one of his all time favourite British music personalities, John Peel. “For me punk was always a British institution. It was political, anti-Thatcher, anti-racist: ‘Black and White United Fight’. It’s The Damned, The Ruts, UK Subs, Derek & Clive. This has always been there for me, along with hip hop, electro, funk. Part of the fun for me is that not only am I in a good place to explore my influences, but there is much more detail available thanks to very reliable technology in the studio. That said, I do like to leave ten per cent ‘fuck it’, for some chaos, and room for emotion and humanity, which is why I prefer a slightly flat vocal performance over something that has been Autotuned.”

We continue chatting and strolling through the city, dodging kamikaze cyclists, inhaling the occasional skunk cloud and watching the setting sun paint the tips of the canal houses a lovely late-summer orange. We stop for a photo at his favourite bridge, the ‘skinny bridge’, where he likes to chill and absorb the surrounding scenery (“it’s my Kermit place on the stairs”); at one of his favourite pubs, the brass-heavy Café Sliterij Oosterling, he’s allowed to pour me a delicious wheat beer that we sip outside on the terrace. Over a sushi dinner he tells me how the French are better than the English at tea.

While far from prickly, Dave Clarke can be cagey. He refuses to talk about politics in the interview, won’t discuss the origin of song titles or lyrics (“too personal”), and won’t reveal where his studio is, aside from it being somewhere on a boat on the Amstel. But he’s open and humble enough to admit he feels embarrassed that he isn’t a musician (“I play with sounds and work out where to go from there”); and that he can be a “difficult person”, “not really interested in small talk”. 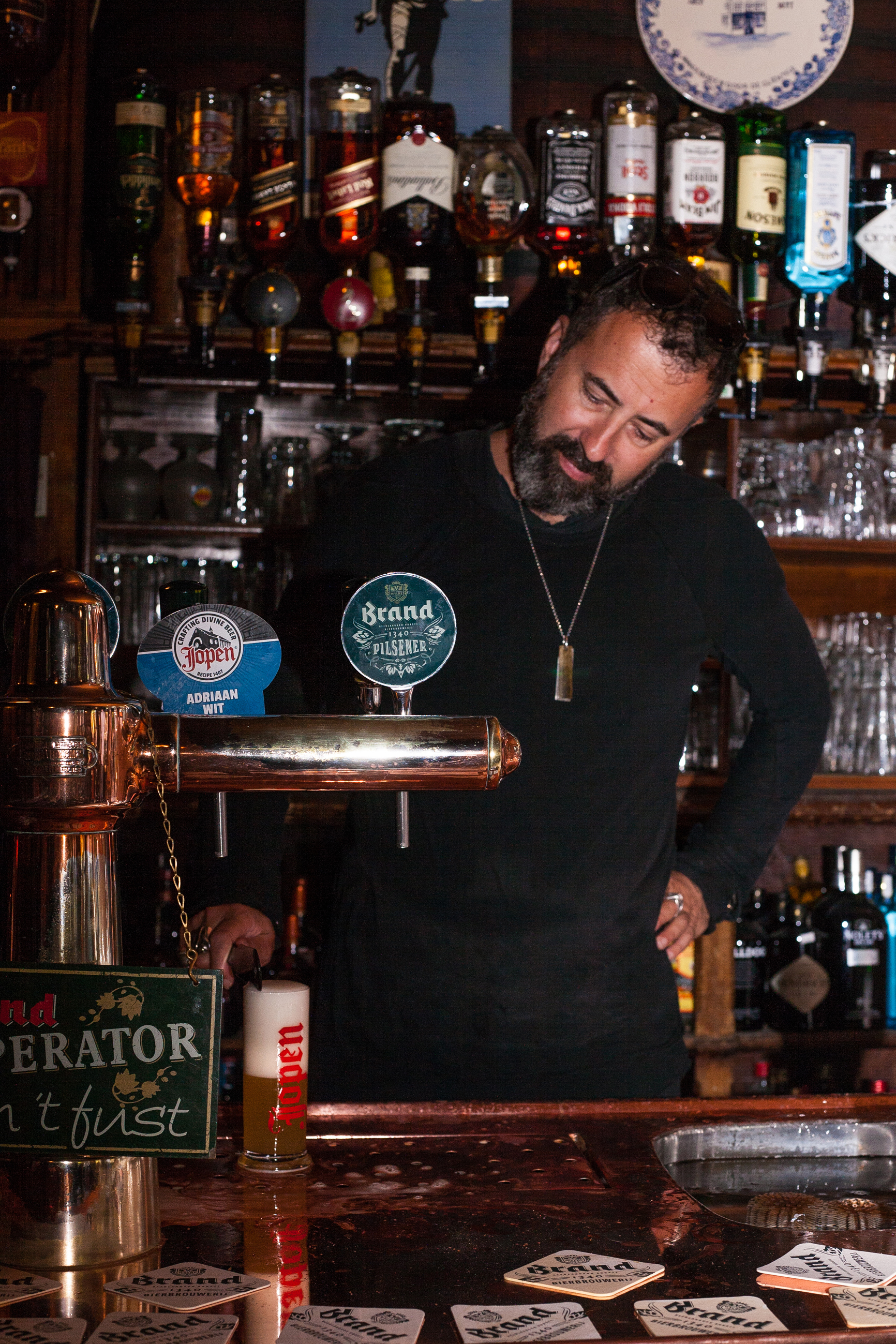 Much of his reputation as a moody bastard probably comes from this desire to focus and pay attention to detail. “I can be friendly backstage,” he tells me at one point, “but when I DJ I need to focus. People say that with my hoodie up I look like a boxer, and that’s sort of true: I want to knock these motherfuckers out with great music. I need to be in the mood – like properly deep in that mood – and to be intense with the music.”

Afterwards, at his favourite whisky bar, a cosy, wood-panelled spot called L&B with an impressive 2000-bottle selection, he banters easily with the bartenders and we enjoy a couple of premium tipples. I learn that he doesn’t really get drunk (“a glass of whisky or sake heightens my focus perfectly”); that he’s only done ecstasy once (“it mostly made me appreciate the colours of the Japanese socks I was wearing and then I felt really lousy for a day or two afterwards”); and that the serious car accident he was involved with in Serbia last year changed his life: “I’m a workaholic by nature, but I take a lot more time out now for myself”

And what does the future hold now for Dave Clarke? He swills the golden liquid in his glass and contemplates the question. “I’m finally really enjoying the studio work again, after so many years away from it. I would like to produce other artists, probably non-techno ones, as well as work more with Mr Jones [Jonas Uittenbosch, his partner in the _unsubscribe_ project]: anything really, as long as it doesn’t involve tech-house…”

‘The Desecration of Desire’ is out October 27 on Skint Records

This feature has been taken from the November issue of Mixmag