There are nights in your raving career when you know that life could not be better. The company, music, location, circumstances: everything is perfect. Plans have come together so inexplicably well that the night has surpassed ‘successful’ and hit ‘sublime’. Go ahead, hang your party boots up. You’ve won raving. You’ll probably never have a night as good as this again.

Such is the case one balmy July night this summer at an illegal rave in the Welsh countryside. It’s a little after midnight when I have this epiphany, and I’m certain my dancefloor neighbours are experiencing similar thoughts. It’s a small but turbo-charged gathering; there’s no more than 100 of the rave’s 200(ish)-strong crowd in the old barn but every single person is categorically having the loveliest time. They’re whooping, hollering, cheering, screaming. And there’s a fair bit of pointing and WTFing going on, too.

Understandably: the man who’s just stepped up to the controls is rave royalty Phil Hartnoll, half of Orbital, one of the longest standing and most influential acts in dance music history. He might not be wearing his signature spotlight spectacles, but the wild spark in his eye makes up for it. He’s playing an all-Orbital set, and he’s clearly having just as much fun as the bunch in front of him. He drops ‘Halcyon And On And On’ while grinning, clapping back, cheering us on. He switches in the skipping breakbeats and cascading riff of ‘Impact’. Spirits rocket through the barn’s sheet metal roof.

Whoops become hollers, cheers become screams. Strangers share glances and shit-eating grins. High fives are popping off everywhere. We are having a serious fucking moment right here. Life genuinely couldn’t be better. Or weirder; this is Phil’s only weekend off, and here he is rinsing a rig in a laser-lit barn to a crowd a fraction of the size he usually performs to… and it’s all because of my silly idea: let’s take Orbital to a 2018-style illegal rave. 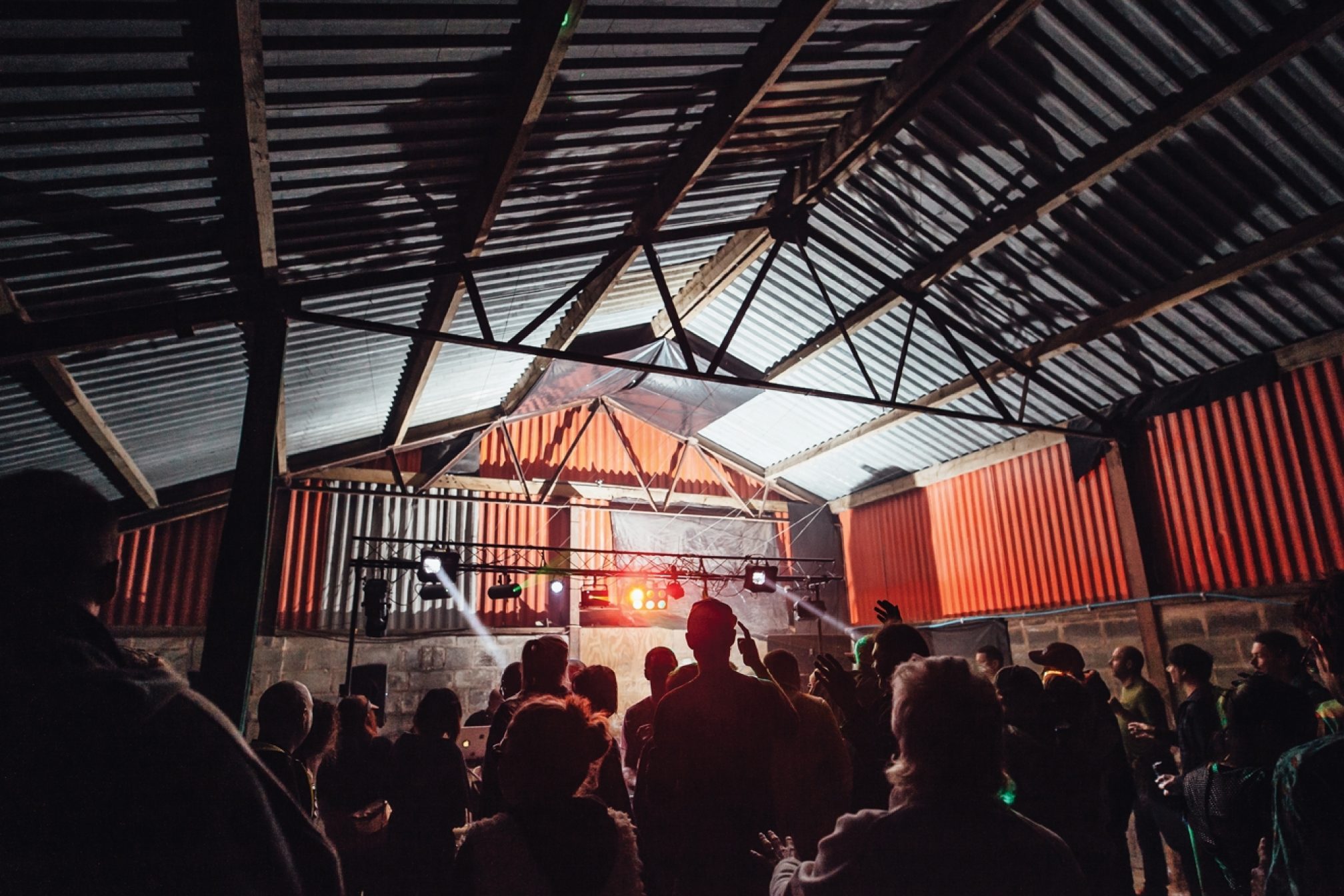 ​The Middle Of Nowhere

Why not? Orbital’s name references the illegal raves surrounding the M25 ‘orbital’ motorway when acid house first exploded exactly 30 years ago, so what would they make of an illegal rave now? Have Phil and his brother Paul’s successes, achievements and overall influence taken them too far from the original source… or would an expedition like this capture animals in their most natural habitat? “Like a pig in shit, mate,” Phil chuckles. “This is my roots: DIY, free parties, squat parties. This is a proper one.”

It’s 5pm and we’ve just arrived at a three-day free party called Full Circle. Taking place on a farm halfway up a mountain, the fields are dotted with traveller wagons, modded VW campers, tents, marquees and the occasional digger. A few dogs and kids run around a medium-sized football goal, complete with net, and Phil leans on a rusty old crusty bus, lighting a joint, taking in the view.

The land sweeps in a dramatic curve that stretches over the Welsh border onto the rolling hills of England. To our right is the barn where Phil will later play, currently rattling with sounds of disco. In the field behind us is another system buried in the trees where echoes of classic Chicago house can be heard. Opposite us is a smaller rig booming with funk, soul and dub. An orange sun is setting, and ravers are beginning to emerge from their tents and vans to dance for another night. The only way this could possibly be more authentic is if it was happening on a common in Castlemorton in 1992.

Phil cuts an authentic figure, too. Tall, thin and dressed all in black with a long Matrix-style overcoat, a monocle hanging around his neck, dark shades and an unapologetic handlebar moustache, he’s every bit the elder rave statesman. He has a constant wry grin and greets anyone who walks nearby. He’s so at home that he hired a van for the occasion, brought his wife and friends and, after being introduced to our contact at the party, even scored a prime-time set. “I don’t want to tread on anyone’s toes, I know what these events are like,” he says. “They’ve got their own thing here. We’re lucky to even be welcomed. Who the fuck am I to barge in and ask for a cheeky little slot? I’m honoured to play!” 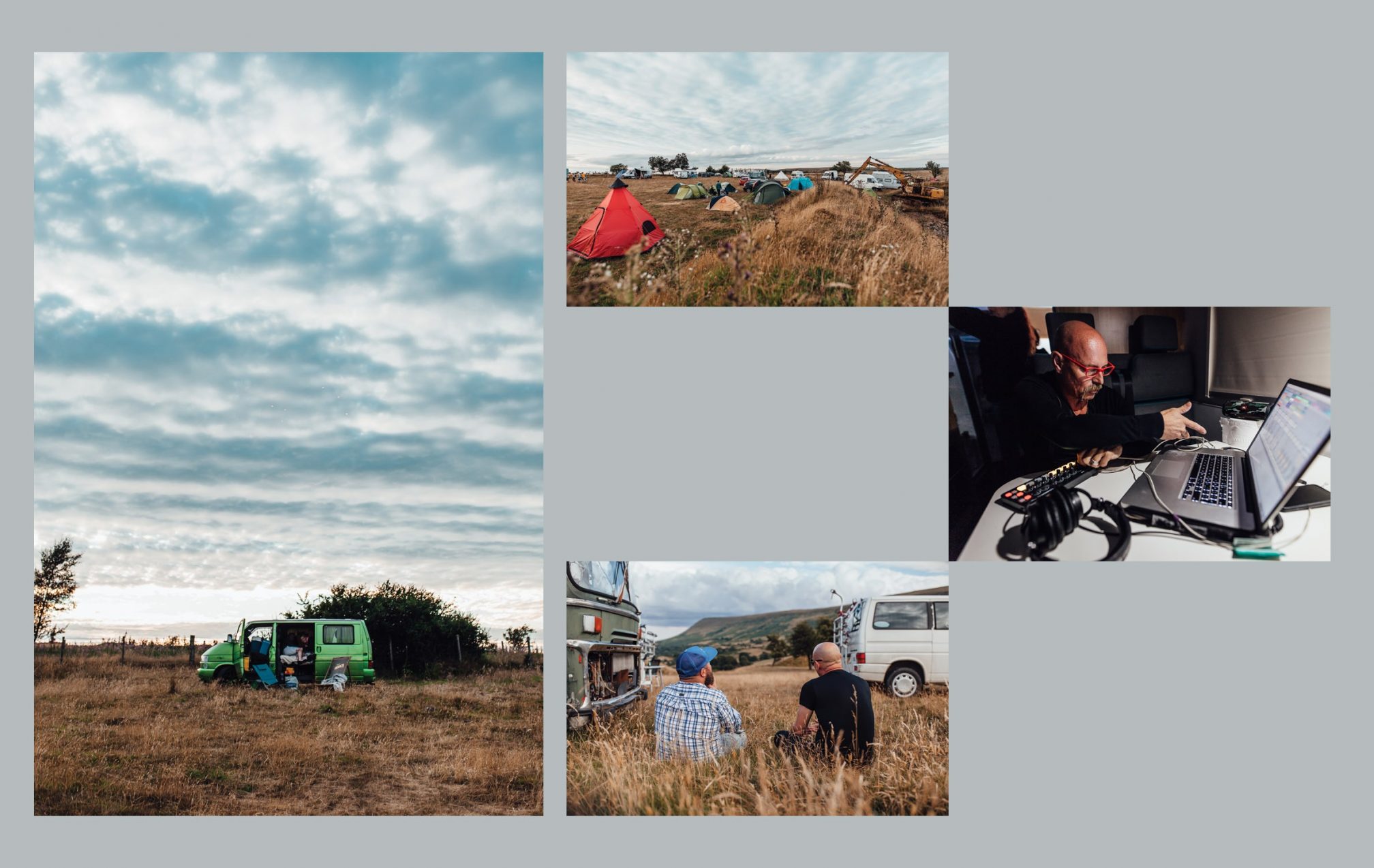 The more we talk, the more I realise just how fitting this expedition is. Full Circle is exactly where the Hartnolls come from. Not the M25 ‘orbital’ raves at all, but events that dig much deeper into electronic music’s foundations.

“We didn’t go to any of those [M25] raves. We didn’t want to play the cat and mouse game with the police, chasing the party and all that bollocks,” explains Phil, who lived in a squat in Wood Green and sold shoes at the time.

“I didn’t need to. We had squat and warehouse parties in London. For years! There was a lot of early hip hop, electro and bands like Cabaret Voltaire, A Certain Ratio, Workforce, New Order. There were parties like Mutoid Waste in Kings Cross already hosting wild raves. It was like a Burning Man meets Mad Max vibe: punk bands in one room, acid house in another. This was before those big raves became a thing.”

“Those [big] raves were just too expensive,” Paul adds days later, over the phone. “They’d charge £20 to get in and I couldn’t afford that doing my three shifts at a pizza restaurant. The problem was, they’d all come out of the pub at 11 and drive from service station to service station, ringing numbers and often never finding one. I preferred the squat parties and free parties. That was the real DIY movement: kids using whatever resources they could to entertain themselves. I was really attracted to the resourcefulness and creativity of that.” 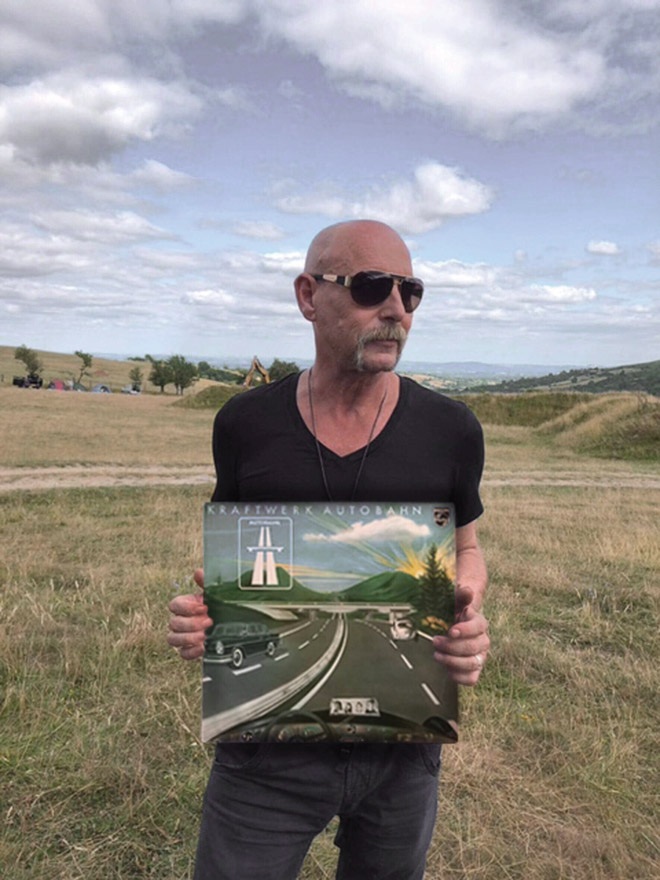 Paul isn’t at the Welsh party. He had family commitments, and couldn’t attend. You get the vibe he wasn’t quite as keen to give up his one weekend off this summer as Phil was. While he still relates to the crowds of thousands he plays to, he’s hung up his recreational raving boots. He still, however, looks back at the pre-Orbital years of free party adventures with affection: how he met singer Kirsty Hawkshaw (who would go on to sing on ‘Halcyon And On And On’ ) at a Stonehenge rave and how he once suffered the heavy arm of the law and took a truncheon “in the nuts”. Meanwhile, in north London, Phil was on his own rave odyssey, hosting parties in his own squat.

“The government weren’t listening,” says Phil. “We warned them it was going to happen with punk. Did they listen? Did they fuck. We were still disenfranchised, still marginalised years later – so we did down our own thing. ‘We’re not going to do what you tell us. We’re gonna go over there, we’re gonna to do our thing and spread some positivity and love’. It was always on the cards right from punk. We were still under Tory rule a decade later – what else could we do?”

From wearing anti-Poll Tax T-shirts on Top Of The Pops in 1990 to their new album ‘Monsters Exist’, references to politics and protest have always been part of Orbital’s work. While both brothers stress that the band isn’t specifically characterised by their politics, they’re acutely aware of the importance, and deep history, of using your art to take a stand.

“We come from a discipline of spoken word records. Bands like Cabaret Voltaire and Severed Heads,” says Paul. “Their music was more than abstract electronics. They set the scene and its parameters. They pushed you in a direction, but wouldn’t necessarily give you the answer. Just as we’re not telling you who the monsters are. That’s for you to work out. We’ve all got our own monsters. It’s very personal.” 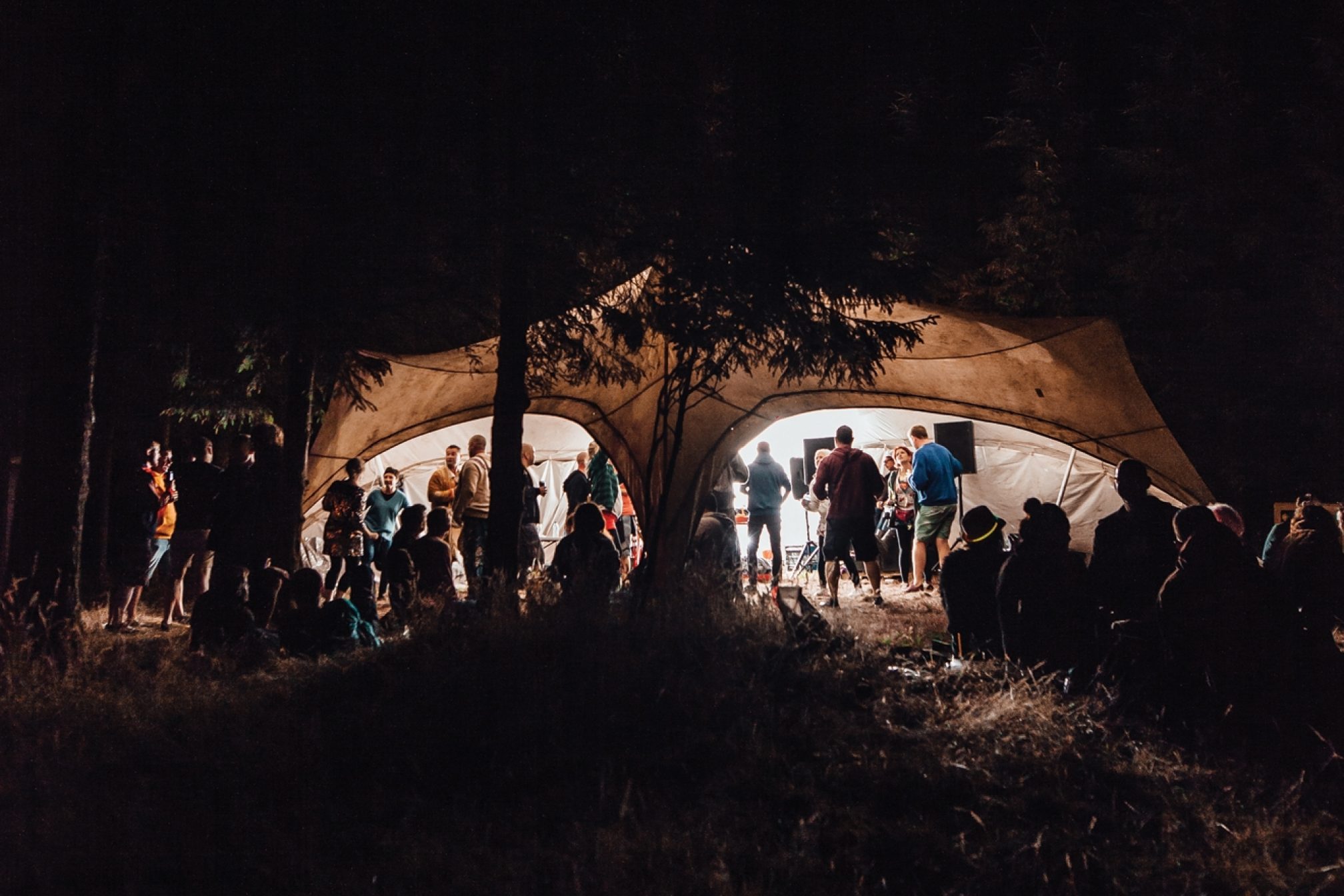 The record itself is personal to the Hartnolls, too. Their ninth studio album may be galvanised by an overall statement about the current scary world climate, but fundamentally it’s the sound of two brothers reuniting (after a tempestuous split that lasted five years) and “having fun again”. The opening title track hits hard, like the theme music for a post-apocalyptic news report; ‘Buried Deep Within’ has a bassline so deep and immersive it could make the d’n’b community blush; while lead singles ‘Tiny Foldable Cities’ and ‘P.H.U.K’ act as quintessential Orbital suites, cleverly layering, looping and developing in a way that the brothers have made their own.

The album also continues another strong theme in their work: science. Having previously made Stephen Hawking sing through a vocoder and wear a pair of their torch glasses at the London Paralympics opening ceremony, for the ‘Monsters Exist’ finale ‘There Will Come A Time’ they invited the eminent Professor Brian Cox to tell a tale. It’s a dark, frank but necessary closing salvo examining the need to look – and think – further than our own noses.

“I mean, ultimately that’s what this is all about, right?” asks Phil, back in his motorhome, preparing his laptop for his set. “The planet. All this nasty politics and fearmongering rhetoric and divisiveness being thrown around doesn’t mean shit if we don’t have a planet to live on. This is about how we treat each other, how we treat the environment, how we move forward and try make sure the future has some hope for the next generations.” 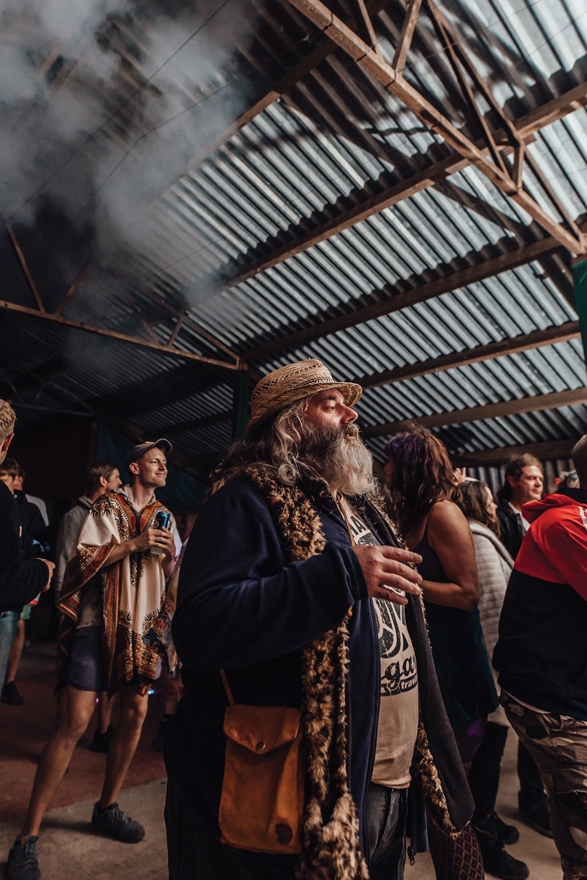 Time will tell regarding the seemingly bleak future. But right at this precise moment, the present is beyond hopeful for the collection of generations at Full Circle. It’s now a little before 1am and Phil is still demolishing the barn (and our brains). The tender twinkles and shivering choral vocal of ‘Belfast’ hove into view and the whole dancefloor seems to express an emotional sigh before he climaxes with a crescendo of ‘Chime’ and ‘Where Is It Going?’. Phil steps back and starts to put away his headphones, but the crowd aren’t having any of it. We whoop, holler, cheer and scream until he plugs back in for one final blow-out: the dark breakbeat mutant ‘Doctor?’

Shared glances become knowing nods. High fives become hugs. “Just look at them all,” Phil grins hours later, sweeping his arm around the dancefloor as we boogie to a sublime Detroit-edged set in the trees. Rolando’s ‘Jaguar’ comes on, daylight peeps through the trees and the wild spark in Phil’s eyes seems even stronger. This might be the first free party he’s attended since the Criminal Justice Bill protests in the early 90s, and he’s relieved to see the counterculture that inspired him and Paul over 30 years ago still exists.

“All these guys – the DJs, the system guys, all the people making an effort to come and party,” he smiles; “they’re doing it because they love it. It’s not about fame or numbers or money or any of that bullshit, it’s about the party and doing something on your own terms. I hate to use a cliché, but these guys are keeping it fucking real!”

They’re not the only ones. While I eventually turn in for a few hours sleep and drive home the following afternoon, wondering if I’ll ever have a night as good as this again, Phil and his friends remain on site. He sends text updates and plays another set on the Sunday night. His last dispatch arrives a little after midday Monday telling me he’s finally heading home. With it is a photo of him in the now-empty field holding a copy of Kraftwerk’s ‘Autobahn’, the album that first triggered his interest in electronic music over 40 years ago. Truly, we have come full circle.

Orbital’s ‘Monsters Exist’ album is out now on ACP Recordings. Many thanks to the Full Circle crew for their hospitality